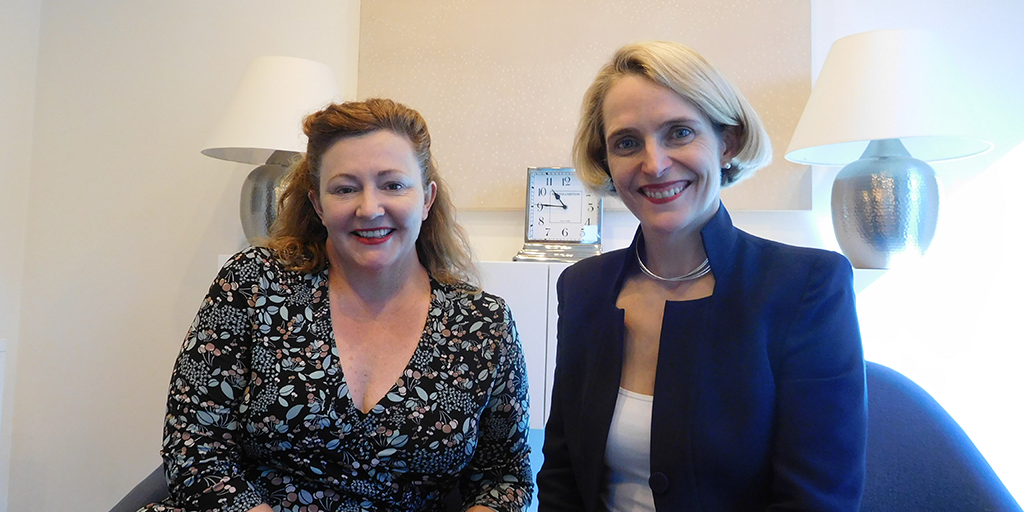 Not many CEO’s have been described as Geraldine Doogue meets Roseanne Barr, but it’s a great way to think of George. She’s unafraid to make a joke, about herself or the world she sees around her.

The company is ‘growing beautifully’, and George thanks her past careers for Shebah’s success. Her keen observation skills as a stand-up comedian and a fear of not having a go, could be the key to success for this fledgling company.

Growing up in a big family and coming up through the Catholic education system, George used humour to stand out.

“Everyone had to dance for their supper at our dinner table. Mum was a teacher, Dad was a doctor, they both had very full on jobs and five kids very close in age. It was bedlam, lots of friends, lots of cousins, and my parents were very social. We had a lot going on at our dinner table on any given evening. So, I guess funny became my thing. Getting a laugh was kind of gold.”

Starting out training and working as a teacher, she hit an unsympathetic response to starting a family. George found childcare made it too expensive to go back to work and with only a bit of spare time, writing became George’s next career.

“Between the Wiggles, a walk to the park and putting my head in the oven. That was what I had time to do. Writing. Luckily the first thing I wrote got published.”

But then nothing more for six frustrating months. After persevering and with the help of editor James Button at The Age she published widely. George then tried comedy which led to a job offer at Triple M in Brisbane.

“It was the breakfast show and it was hell on legs, get up at 3am, at the studio for 3.30 am for two hours of prep. Then bang on from 5.30 till 8.45 to be funny and topical, but never letting it get out of control. I learned to be part of a comedy team – to feel secure enough in yourself to let someone else get the laugh.”

“Then I got a job offer to go to Mix-FM, in Melbourne but that didn’t work out, I got sacked on April fool’s day, I thought it was a joke. It wasn’t. That was the end of commercial radio for me.”

That door closing, as is so often the case, opened doors to other opportunities. It came together to lead her to this new business opportunity.

“Post-divorce I had enough for a deposit, but not enough to buy a house. And patchy income and banks don’t see single mums with four dependent children as a good look, so I’d registered as an Uber driver to build my income. But when it came to actually driving, I was too intimidated, too scared and uncomfortable to have strangers in my car. At the same time my daughter had turned 18, she’s tall, with long curly hair, and very glamorous looking. She had had some frightening exchanges in cabs and Ubers and was increasingly calling me to come and pick her up after going out at night.”

“One day I was driving down Punt Road in Melbourne, thinking about Pink Cabs in London but it’s not a ride-share service as such. I thought, I reckon there would be something in this, in all these women who are in my position where they want flexible work, they’ve got a car, they’ve got some time, but not enough for full time work. They want to work unapologetically, they want to help young women get around, they want to support women who are at work, women who are in the corner office, or are in government or nurses doing late shifts. I remember my sister working as a nurse forever getting parking fines. Because transport for women is still such a big thing, they are forever watching the arc of the sun thinking is it going to be too dark for me to catch that last train.”

“And it all sort of hit me at once I sort of felt like a mad composer for three days I sort of couldn’t sleep. I registered the business with ASIC, I bought a domain, I fleshed it out, I thought this is what I’m going to do. I set up a Go-Fund-Me page because I didn’t have a lot of money, but it drew a lot of media attention and a lot of criticism.”

“One thing I’ve never lacked is courage, I’m not scared of failing. I’m much more scared of not having a go. That for me is terrifying, so we’re in it now, we’re going to give it a red hot go. It is growing beautifully so that’s gorgeous, the early indications are really strong so we’re very pleased about that. It feels like we’re here at the right time.”

In the podcast George talks more about starting the business and about the policy changes afoot around ride share services. She also explains how men can use the service under special circumstances.

Listen through the player above or subscribe on iTunes.