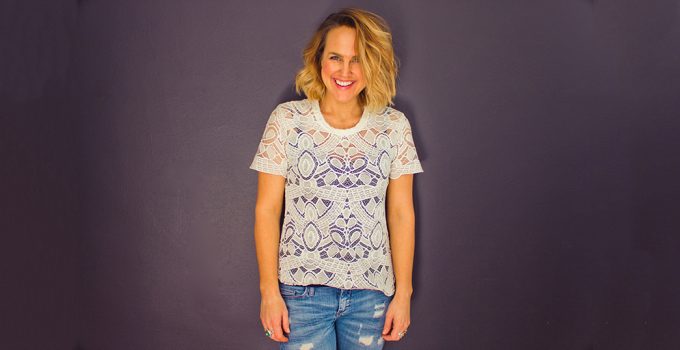 Monty Dimond is a radio and television presenter familiar to many from The Circle, Tractor Monkeys and radio shows in Melbourne and Sydney. Some unexpected free time led her to launch Show and Tell bringing the intimate conversations that happened on the couch of The Circle to a new audience where Monty is free to work with like-minded women. And finally, she gets to call the shots.

In this Success Story, Monty tells Catherine Robson how she took a stand to get her break and how she switches off from work at her brand-new holiday home in Byron Bay.

Katie Dimond switched to being Monty Dimond when she was on air among too many Kates in her debut job as a radio presenter in Albury and the name just stuck. She got ‘tunnel vision’ about becoming a radio presenter after randomly landing a job driving the Black Thunder Austereo promotional vehicles because, like many of us, she did not have a clue what she wanted to do after finishing school.

She now feels comfortable with her success in radio, but says that was hard won, with a lot of support.

“I really reached out to a lot of women, a lot of Melbourne women, like Jo Stanley, Bridget Duclos I’m good mates with Krissy Swan and Kate Langbroek, so I would email them and try not to be pesky and ask if I could buy them a coffee and pick their brains. I’ve always had how generous they were to me in the back of my mind, and I’ve got to pass that on. Now there are times when I go, oh I can’t be bothered and then I go well, they could be bothered to reply to that email, have that coffee. I think it’s so important to give back because then somebody will remember that and pass it on.”

Dimond has only just started to talk about the events In Sydney that gave her the space to start her new venture.

“Breakfast radio is really challenging, you’re either made for it or you’re not and I thought I’d give it a go and then I went and I fell pregnant really early on and I lost my job, it was really full on discrimination”

Describing the acrimonious departure, Dimond says she stood up for herself, demanding to be paid out of her contract, which ultimately gave her some free time to start her new venture.

“I was a guest on The Circle, a TV show on Channel Ten, one of the producers on there used to work with my partner Sam Kavanaugh, who’s Hamish and Andy’s producer.  So she was his assistant producer and I remember feeling so low on confidence, but I remember having this awesome idea for recreating the really intimate conversations the women would have on the couch, with no guests, just really stripped back, you know and often when the cameras weren’t even on. That’s kind of where Show and Tell really started, let’s interview women who we admire and want to hear their story, let’s film it, let’s put it on this website and everything else that we love let’s put it on this website as well. So that’s kind of how it came about.”

The site’s success has been a springboard for other things, like appearing on Tractor Monkeys and other TV shows. This has led to increasing her exposure and it helped secure a fascinating range of guests. Although the routine of making the show is frenetic, Dimond feels comfortable enough to take frequent holidays.

”I work to holiday, you know we could pay off our mortgage instead, I’ve always been very good with money, I grew up with a single mum and so I worked from the first moment I could, 14 and nine months or whatever it was and so I would save my money to get stuff I really liked. We holiday in Byron Bay and it’s always been our dream to own a place there and last time we were there we just plunged and did it and we have no idea how we are going to pay for it, and I’m just like, it’ll figure itself out.”

In the podcast Monty talks about what she’s reading, how it’s helped and what podcasts she listens to when she switches off and unwinds.