What Blade Runner 2049 teaches about price and value 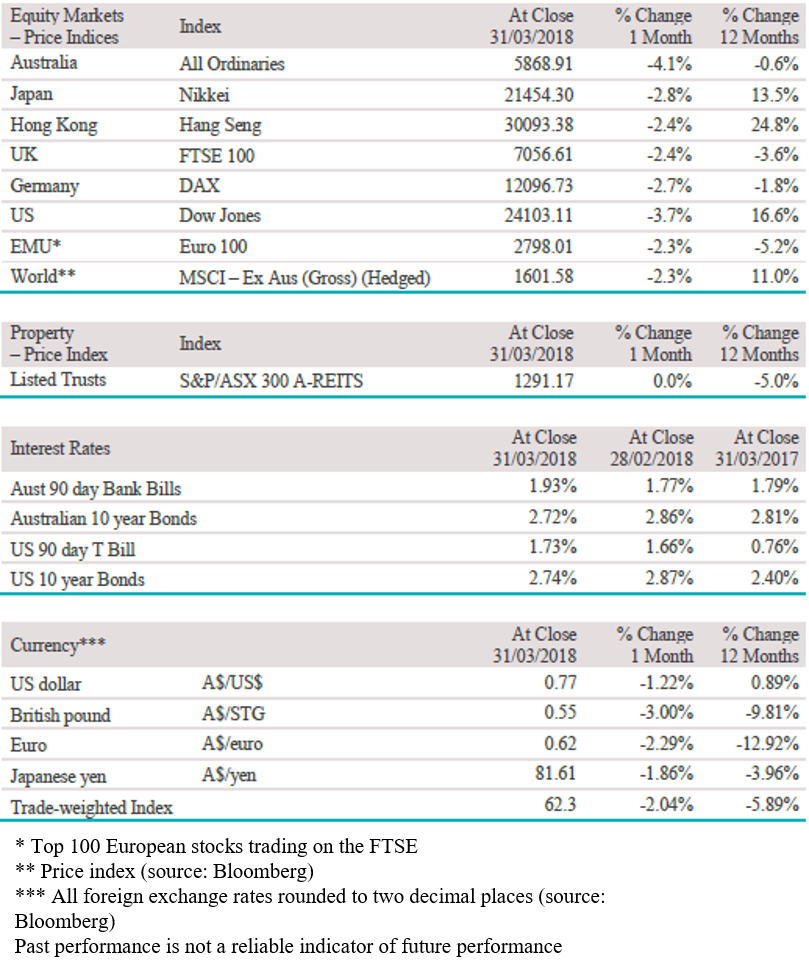 While underlying economic data is broadly positive, markets remain concerned about the prospect of inflation as well as the potential for a trade war between the US and China. Shares continued to sell off in March as investors favoured bonds, property and defensive sectors. The US economy is maintaining momentum and measures of underlying price inflation are gradually moving higher, but signs of imminent wage inflation have not yet materialised.

The prospect of a trade war has been the cause of some consternation for markets over the past month, with China announcing a retaliatory 25% levy on a range of US products, including soybeans, cars and whiskey. While US steel and aluminium hardly represent the new economy, it is the response from US trade partners that poses the greatest uncertainty. The revised figure for Q4 GDP growth was 2.9%, up on the previous 2.5% estimate, and reassuring markets that economic momentum is being maintained. The ISM manufacturing PMI fell modestly in March from 60.8 to 59.3, but remains firmly in expansion. With the PMI above 55 for the past ten months, the US manufacturing economy still appears healthy. Manufacturers reported concerns about the impact of tariffs across the supply chain, but so far demand appears to be holding firm. Non-farm payrolls edged up by 103,000 in March, versus the expected 193,000, leaving the unemployment rate unchanged at 4.1%. While a significant miss, the labour market is already tight, with unemployment at a 17-year low. Growth in average hourly earnings, while slightly higher at an annualised 2.7%, is still not conclusive evidence of a sustained pickup in wages.

Despite stronger than expected growth throughout the eurozone, the ECB kept its key interest rates on hold in March, although notably dropping its usual commitment to increase the size of quantitative easing if the situation deteriorates. Euro area inflation recorded 1.4% in March, up from 1.1% in February but still well below the ECB’s target. Core inflation (excluding energy, food, alcohol and tobacco) was estimated to be flat at 1.0% and has refused to budge over the last six months. Unemployment in the eurozone fell to 8.5% in February, down from 8.6% in January and reaching the lowest rate recorded since September 2008. The IHS Markit Eurozone Composite PMI saw eurozone economic activity expand at the weakest pace since the start of 2017, as growth moderated in both the manufacturing and service sectors. Bad weather was again cited for the slower pace, along with supply chain constraints from recent growth. In her Mansion House speech in early March, Prime Minister May sketched out the form of a Brexit agreement, stating Britain would stick close to EU standards, mirror Brussels’ state-aid and competition rules, embrace some EU agencies, and accept that European Court rulings would still affect the UK.

Economic data for the early part of 2018 has been mixed, with manufacturing PMIs failing to break out of the low 50s, while exports, industrial production and retail spending data have surprised on the upside. Producer prices continue to outpace consumer prices, although the annual rate has dropped back to 3.7% year-on-year, while the CPI lifted to 2.9% year-on-year in February. The uncertainty around the true state of the economy relates to the timing of the Lunar New Year holiday period, as well as the initial unwinding of the authorities’ anti-pollution campaign. Clearly, the strength of the global economy is benefiting China, however the lift in interest rates and the slowdown in credit growth to the shadow banking sector are likely to mean slower growth over coming quarters. In an important political move, the Chinese leadership proposed to remove the line in the constitution stating that the President and Vice-President of the People’s Republic of China “shall serve no more than two consecutive terms”. Regarded as the most powerful Chinese leader since Mao Zedong, the constitutional change could allow President Xi to serve in that capacity without consecutive term limits.

Although headline GDP growth numbers in Japan have been low in absolute terms, by Japanese standards they have been solid, resulting in a narrowing of the output gap. Japan’s Q4 GDP growth of 1.6% year-on-year is the 16th quarter of positive growth, but there have been a number of misses along the way. The Nikkei Japan PMIs suggest a moderating rate of output growth, with manufacturing growth softer but still maintaining an expansionary trend in both output and new orders, encouraging firms to raise employment and input buying. After dropping sharply to a multi-decade low of 2.4% in January, Japan’s unemployment rate rose slightly to 2.5% in February. The labour market has been tightening since the post-GFC unemployment high of around 5.5%. The bad news is that annual wage growth has fallen in real terms in each of the past three months, making the Bank of Japan’s task of raising inflation even harder.

Despite leaving the cash rate on hold at its March meeting, the RBA continues to expect labour markets to tighten globally, and for central banks to get on the front foot by withdrawing stimulus. In its statement, the RBA mentioned the market’s concerns about US trade policy and its contribution to heightened volatility. The RBA and Treasury both expect GDP growth to be in excess of 3% over the next two years, but monetary policy is still extremely accommodative. The paradox is best explained by ongoing consumer caution, and the concern of policymakers over the impact of any interest rate rise on the household sector, especially given current low wages growth and high levels of household debt. Australia’s labour market continues to tighten, with 17,500 seasonally adjusted jobs added in February. The unemployment rate was unchanged at 5.5% and has been steady for the past six months. The AIG Manufacturing Index jumped 5.6 points to a record high of 63.1 in March (the second-highest was 62.1 in May 2002). Australian retail recovered slightly after a very lacklustre start to the year, with retail turnover rising 0.6% in February, soundly beating the consensus 0.3%.

The S&P/ASX 200 Accumulation Index fell 3.8% in March, topping off the worst Q1 performance since the GFC despite a mostly positive earnings season in February. Potential inflation is still a concern for investors, and the market is steeling itself for the next rate hike from the RBA, which, when it finally comes, will be the first increase since November 2010. All sectors aside from property were down over the month, with defensive utilities shares (-0.8%) able to stem losses, and industrials (-0.9%) supported by gains from Brambles (+4.0%). Telecommunications (-6.2%) was the worst performing sector, with Telstra (-6.3%) falling to its lowest price since 2011 and still finding its way in a very different marketplace since the arrival of the NBN. Financials (-5.9%) took a hit through the month, with major lenders coming under pressure as the Financial Services Royal Commission began testimony, while investment managers suffered from further market falls. Materials (-4.2%) continued their slide since the start of 2018, with Fortescue Metals (-14.1%) following the iron ore price down and Rio Tinto (-10.4%) lower despite announcing the sale of its last remaining coal asset. 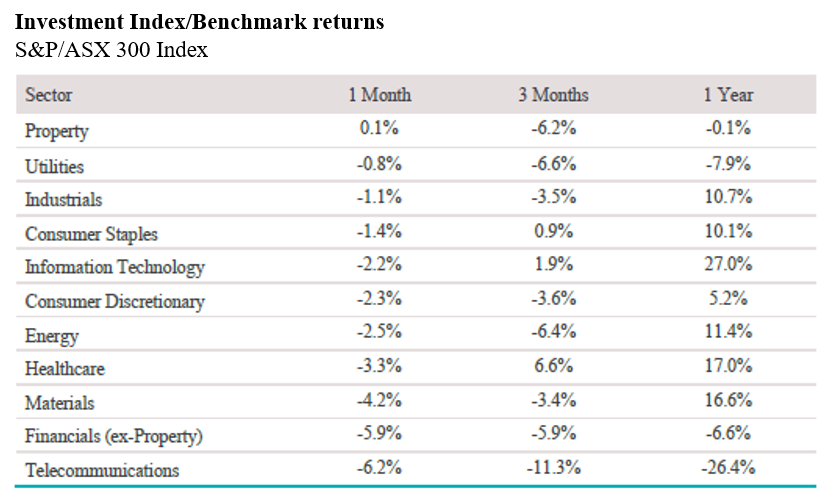 The MSCI World ex-Australia Index returned -2.3% in both Australian dollar and local currency terms as global equity markets continued to slide through March. The US S&P 500 Index was down 2.7% on the back of February’s 3.9% fall, reaching a high of 2787 points to finish the month at 2641. The VIX settled early in the month at 14.6 before jumping higher to 24.9—still elevated compared to the historic lows of 2017. Financials (‑4.5%) were hardest hit, followed by materials (-4.5%). In Europe, the STOXX Euro 600 Index fell 2.3%, with banks also suffering, led by the beleaguered Deutsche Bank (‑14.2%), which took action to replace CEO John Cryan after reporting its third annual loss in a row. In Asia, the Chinese CSI 300 Index was down 3.1%, Japan’s Nikkei 225 Index fell 2.8%, and Hong Kong’s Hang Seng dropped 2.4%.

The S&P/ASX 300 A-REIT Accumulation Index rose 1.1% in March, with lower yields and a flight to defensive asset classes supporting the sector. A-REITs may also have been positively impacted by Labor’s plan to remove franking credit refunds, which will impact high yielding shares like Telstra but not the A-REIT sector, which does not generate franking credits. Global diversified investor Cromwell Property Group (+6.5%) led the gains, with FY18 guidance pointing to a yield of 8.9%. Shopping centres came under pressure, with Vicinity Centres (-2.8%) and Westfield (-2.7%) down amid store closures from struggling retailers. Globally, the EPRA/NAREIT Developed Market Index (AUD hedged) rose 2.4% in March, with US REITs gaining 3.7%, dragged down once again by malls (-2.6%) and boosted by healthcare (+8.8%), data centres (+7.5%) and hotels (+7.0%).

Australian bonds returned 0.84% over March, with Australian government bonds returning 0.99% and longer-term government bonds (ten years plus) returning 2.60%. The Australian 10-year yield fell from 2.81% to 2.60% and the spread over 2-year bonds narrowed. Globally, the Bloomberg Barclays Global Aggregate Bond Index (AUD hedged) returned 2.67% as global yields pushed lower. Despite a 25 basis point rate hike from the Federal Reserve, developed market yields contracted as investors rotated into fixed income assets, and credit spreads widened. The US 10-year treasury yield underwent significant contraction, falling from 2.86% to 2.74%. The ICE BofAML US High Yield Option-Adjusted Spread (a measure of the performance of high yield corporate debt) rose from 3.47% to 3.72%. The Japanese 10-year yield fell from 0.05% to 0.04%, still hovering above the Bank of Japan’s zero yield target. The German 10-year yield fell from 0.65% to 0.49%, while the 5-year yield fell back into negative territory, falling from 0.02% to -0.11%.

The Australian dollar fell 1.2% against the US dollar in March and 2.0% on a trade-weighted basis, finishing the month at USD 0.77. Australian rates are now below US rates across the yield curve, and this could be amplified as the Federal Reserve continues to tighten policy, placing downward pressure on the AUD. Commodity prices have also been strong, providing support to the AUD, although the Chinese economy appears to be losing momentum as policy stimulus fades. The US Dollar Index fell slightly by 0.4% in March and has been flat over the past two months, but is still weighed down by the growing ‘twin deficits’ (budget and current account).

The information contained in this Market Update is current as at 10/04/2018 and is prepared by GWM Adviser Services Limited ABN 96 002 071749 trading as ThreeSixty Research, registered office 105-153 Miller Street North Sydney NSW 2060. This company is a member of the National group of companies.