Is the bad news priced in?

It has been around two and a half weeks since our last Market update note. It feels a lot longer. The speed at which new information is being revealed is unprecedented. Market moves during this time have reflected this. The initial move down was the fastest in history. Daily volatility has been extraordinary. Markets don’t know where they want to go, but they will get there quickly.

We rounded out our last Update by highlighting the binary nature of potential outcomes. Either:

So far, the balance of probabilities hasn’t really shifted in either direction. Below, we elaborate on why.

With respect to Outcome 1, we now have additional evidence (alongside the China experience) that daily confirmed case growth slows in response to social distancing and lockdown measures (see FT diagram below). 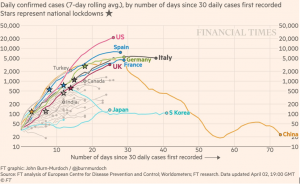 However, the implementation of these measures has been somewhat haphazard across different countries. The Governments which have responded quickly are delivering superior public health outcomes to those which have delayed action. Early adopters may also be delivering better medium-term economic outcomes. New research suggests that in the Spanish Flu Pandemic, cities which enacted harsher restrictions benefited from a stronger economic recovery than those which did not[1]. This makes a trade-off between economic growth and public health (which, though morbid, had been raised by some) less obvious.

The problem we all face is the uncertainty around what happens when social distancing measures are relaxed. South Korea and China, which had widespread outbreaks, have both apparently managed to get them under control and put themselves on a path of renewed economic growth. Countries such as Taiwan and Japan (and until recently Singapore) have managed to avoid wide-spread transmission in the first place. These examples provide hope. However, we need to see more evidence that other economies, which had more widespread transmission before locking things down, can be reopened (for the most part) without causing renewed widespread transmission before we get more confident that we are on a path to recovery.

With respect to Outcome 2, The massive fiscal and monetary stimulus injected in the economy has reduced the probability of a major systemic collapse. The Federal Reserve is buying more assets than it did in the height of the GFC and the US Government budget deficit is likely to hit wartime levels (see below). Everything including the kitchen sink is being thrown at the economy to keep it afloat and we expect authorities to take more action if necessary. 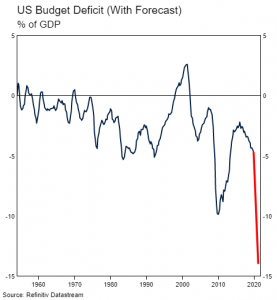 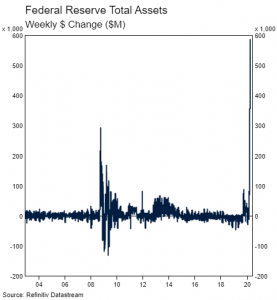 However, it seems that the economic impact of the lockdowns will be much worse than anyone originally thought. We can see the damage caused by the lockdowns in the charts below. The first, US Jobless Claims, will be familiar to many by now. It implies that the US unemployment rate has risen to around 10%, with nearly 10 million filling for unemployment benefits in the past two weeks. It will surely rise higher in the coming weeks and months. 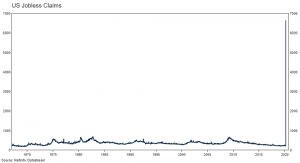 The second chart is our US Growth Barometer, which is already showing a fall in US economic activity close to the worst declines of the GFC. We expect it will get much worse in the months ahead. In fact, this will likely be the greatest fall in economy activity seen by the global economy since the Great Depression – and that’s if the economy can get back to work in the second half of this year.

While for now equities seem to have stopped collapsing despite the increasingly bad news, our task is to determine whether the record falls in equities broadly captures the unlikely combination of the path of the virus, shocking economic data and extraordinary stimulus packages. So, uncertainty abounds. Last week, we undertook an exercise with our Investment Committee where we outlined the bull and bear cases for the global economy, and a devil’s advocate from the Committee was assigned to critique each. Both cases were reasonable and believable, as were the rebuttals.

The bull case rests on a few key themes. Social distancing is effective in bringing the virus under control. During the period of lockdown, health care capacity is built, human behaviour changes (hand washing, mask wearing, continued physical distancing) and better treatments become available[2]. Businesses adapt well to a new way of operation (video conferencing and remote working, pivot towards home delivery), meaning the damage from the lockdown is not too bad once stimulus is taken into account. Lockdowns ease case growth relatively quickly. Subsequently, economies and populations, with massive stimulus, low oil prices and pent up demand behind them, can then be driving a huge economic recovery in the second half of the year.

The bear case rests on a key, and very reasonable, presumption that lockdowns must last longer than currently anticipated. Any relaxation of lockdown just brings us immediately back to overwhelmed hospital systems, and fatality rates which are simply unacceptable to the broader population. In addition, the build up in corporate leverage we have seen since the GFC is unsustainable when a large proportion of the economy is facing an unimaginable revenue shock. This drives defaults higher than we saw in the GFC. All liquidity across capital markets disappears in this scenario. In addition, the US forward PE has only fallen to 15. Outside of the Tech Crash and late 2018, previous bear markets (1987, 1990, GFC and 2011) have driven the US forward PE down towards 10 (see chart below). If that happens again, that’s a further 30% fall from here before equities become “cheap” enough to entice the marginal investor again. 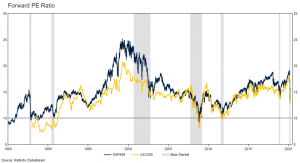 We think there is light at the end of the tunnel, but there is a bit more darkness before we can see it. There is likely a path out of lockdown which delivers an acceptably low infection and death rate. However, case growth needs to collapse, and stay low, for a reasonable period of time before it can begin. Italy has been locked down for around a month and case growth is only declining slowly. In addition, this is a path of gradual relaxation, changed behaviour (we expect people will be compelled to wear masks outside in short order, shops and restaurants are likely to be quiet even if allowed to be open), and very slow recovery.

Markets, while down around 25%-30%, seem to be pricing a rapid acceleration in growth and earnings in the half of the year. Consensus earnings growth for 2020 has been now been downgraded slightly (see chart below), but consensus expects a sharp rebound in 2021. Given the depth of the likely recession, consensus should continue to downgrade earnings in the months ahead. 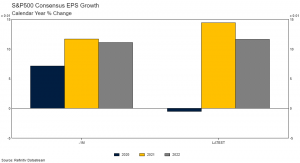 This is inconsistent with the outlook above. As a result, we think there is further equity weakness ahead. While QE will likely keep nominal interest rates low, the risk/reward trade off from holding bonds is poor.  There are substantial longer-term issues about bonds which we will address in a follow-up insight.

[2] As an aside, this paper outlines a path to opening economies back up again: https://www.aei.org/research-products/report/national-coronavirus-response-a-road-map-to-reopening/

The information contained in this Market Update is current as at 06/04/2020 and is prepared by Drummond Capital Partners ABN 15 622 660 182, a Corporate Authorised Representative of BK Consulting (Aust) Pty Ltd (AFSL 334906). It is exclusively for use for Drummond clients and should not be relied on for any other person. Any advice or information contained in this report is limited to General Advice for Wholesale clients only.