Do Australian Elections Matter for Markets?

With the country staring down the barrel of another federal election, this month’s Market Update is dedicated to some fact checking around the ongoing claims around which party is the better “economic manager” and whether the election matters for domestic markets in any meaningful way.

A common narrative among investment commentators is that elections can be preceded by a period of market uncertainty as investors digest the risk of changes in economic policy. This has certainly been the case in many overseas markets historically, especially when there are important issues at stake. Obvious examples include the Trump election, the Brexit vote, Italian and Spanish elections during the Sovereign Debt Crisis and more recently with the risk of a Le Pen victory in the 2022 French election. In the 2019 UK election, Labour leader Jeremy Corbyn took a policy of nationalising rail, water, and energy transmission to the polls (and lost). Elections matter even more in emerging markets, where a far right- or left-wing candidate can come with the risk of capital seizure, or a reform orientated candidate can actually make a positive difference.

The Australian story is nowhere near as interesting. Especially in the past few decades there has been little meaningful difference in the policy platforms of the two major parties. This is evidenced by the market reaction around election time. Below, we show the performance of Australian equities versus the world benchmark in the days around each federal election over the past fifty years. It is clear that there is no structural uncertainty. On average, the Australian market outperforms in the lead up to an election and then underperforms afterwards (right chart). However, the average does a poor job of describing what actually happens, with the chart on the left showing relative market movements over the period are basically noise.

What about when there is a change of party? Since 1970 the average relative market movement in the fifty days post an election where the incumbent party has lost was -1.2%, which is inconsequential. On average, Australian markets have outperformed by 1.7% when Labor has claimed victory from the Liberals and underperformed by 4.2% when the Liberals have taken power from Labor.

That is not to say that domestic elections cannot cause market uncertainty. If a major party (or a minor party which had a reasonable chance of holding the balance of power) came to the election with a dramatic prescription for policy change markets would price that with higher volatility, or with a market rally (should the policy involve substantial corporate tax cuts for example). That is certainly not the case in this election, however.

Is Anyone a Better Economic Manager?

Politics is a controversial subject for many people. It is important to note upfront that most economic policy in the modern era is either bipartisan (independent central bank, robust competition policy, general support for free trade, aim for balanced budgets over the cycle) or subjective (who gets what share of the pie, what industries/sectors should be supported by the government). With that in mind, lets measure historical outcomes under various governments to assess whether there has been much difference between the two major parties.

Below, we present a scorecard of macroeconomic and market outcomes under various Australian Governments since the 1970s. Green text represents a “win”, red a “loss” and black a “tie”. Under Labor governments, equities appear to have outperformed, and the cash rate and inflation have enjoyed the largest declines during their terms[1]. Liberal governments have seen lower average unemployment, cash rates and inflation (though you could argue the latter two are thanks to the previous Government since they enjoyed the largest improvements in these variables over their terms), bigger falls in the unemployment rate and less deterioration in the budget position. There has been no difference in either party in terms of economic growth, productivity growth or the average budget deficit.

Below, we show the performance of these major macroeconomic and market variables and which party was in power (blue = Liberal, red = Labor) through time. Optically, productivity growth appears to decline during Liberal Governments. However, this is largely because Labor was saddled with Government after 1980s recession and the Financial Crisis and productivity growth tends to be quite high following a recession (dead wood taken out of the economy and a large pool of skilled labourers for businesses to hire from). The Liberals were in power prior to the Covid Recession and the Financial Crisis, but we can hardly blame them for those. The 1982 recession (which the Liberals were also in power for) coincided with a major drought, which boosted inflation – necessitating large interest rate hikes. Politicians love to take credit for a lot, but we are yet to see them try and do it for the rain. Budget deficits have risen and fallen under both Governments, with the trend up and down basically driven by whether there is a recession or not. If you can’t blame them for the recession, it’s hard to blame them for the resulting deficit. Inflation declined between the mid-70s and 1990 under both parties. But before we allocate prizes for that, the decline was part of a global phenomenon which reflected central bank action in the years prior, the advent of inflation targeting, structural economic reform (pursued by both sides parties), the entrance of China into global manufacturing markets and so on. Since then, there has been no real pattern. 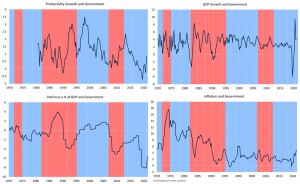 Like inflation, the cash rate has generally declined under both parties and for similar reasons. The decline in the cash rate since the Financial Crisis hasn’t really reflected good management on the part of either party. Growth has been slowing structurally and the RBA has had to respond to maintain growth at an acceptable level. Like the deficit, the unemployment rate goes up when the economy is weak and falls when it is strong. In terms of markets, in line with macroeconomic variables, there is no clear winner. Australian assets outperform and underperform under both parties. 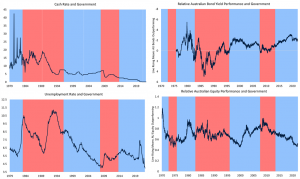 Hopefully, the key takeaway for our readers here is that both party’s claims to the title of best economic manager are spurious, especially when they start mentioning individual macroeconomic data points.

The reality is Australian Governments get dealt a hand when they are elected and for the most part, they make gradual policy changes aiming to improve things, but which have limited macro impact (putting it kindly) or focus on winning the next election by spending all day berating the opposition (putting it less kindly). They aren’t really pulling fiscal levers to grow or slow the economy. They aren’t dramatically changing the way businesses operate or consumers spend. Both parties love to pork barrel favoured industries, which impacts the fortunes of some but isn’t really economic policy. If there is a recession, most of the time it is driven by global factors over which Governments have no control. If China stops building high rises and the price of iron ore falls to $20 per tonne, the economy will hurt, but there is no point blaming a politician no matter how much fun when you are in opposition. Both parties will engage in fiscal stimulus during a recession, and the magnitude and scope is roughly the same no matter who is “in charge”. An Australian Government could tip the economy into recession via bad policy or undertake a dramatic reform agenda, but Governments in recent decades have shown little appetite to do either. Stability is the name of the game.

So, if neither party is a standout economic manager or responsible for the fortunes of the nation, why do Australians enjoy such an enviable quality of life relative to many other countries? As we wrote in October 2020[2], strong economic growth in Australia since the 1990s recession was originally supported by the significant bipartisan economic reform agenda in the 1980s and 1990s, which saw 10-year average productivity growth in Australia double in the 1990s versus the 1980s. Since then, external factors (largely the rise of China and falling interest rates) have seen Australia enjoy a series of housing, mining investment, terms of trade and export booms which have all supported our economy. 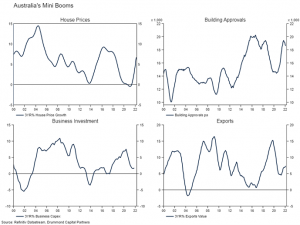 From many vantage points, these booms have left Australia the envy of the world (see below). We have a much lower unemployment rate than the OECD average. Despite the deteriorating fiscal situation, our government debt to GDP ratio is around half the average of the G20, meaning there is plenty of room for either party to engage in fiscal stimulus should the economy worsen. Australian real wages growth has been much higher than in the USA (and many other countries). Household balance sheets are also in good shape. Net wealth per person has been in the same ballpark as the USA (the richest country in the world) since 2010 (though has fallen away a bit recently). 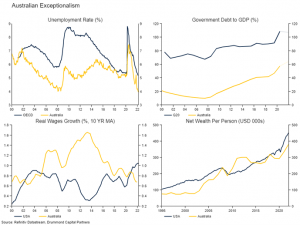 From our perspective, the election doesn’t really matter from an investment returns or portfolio construction perspective. The key question is whether domestic assets will outperform global assets over the long term and in the immediate period ahead. Our portfolios are currently significantly overweight Australian equities. This reflects their relative defensiveness versus global equities and substantial commodity price exposure. Over the longer term, the policy stability exemplified by our relative party platforms in the upcoming election should continue to serve domestic equities well versus more geopolitically volatile countries. However, attention must be paid to the risk that some of the tailwinds the economy has received over the past few decades unwind. The rocketing housing market has left households very susceptible to rising interest rates. The economy is also highly sensitive to falling commodity prices, though in that event we would expect a falling currency to provide some buffer. As always, we will monitor the investment environment and adjust the portfolio accordingly.

[1] Though one could argue that falling cash rates and inflation are most often coincident with periods of poor economic growth. 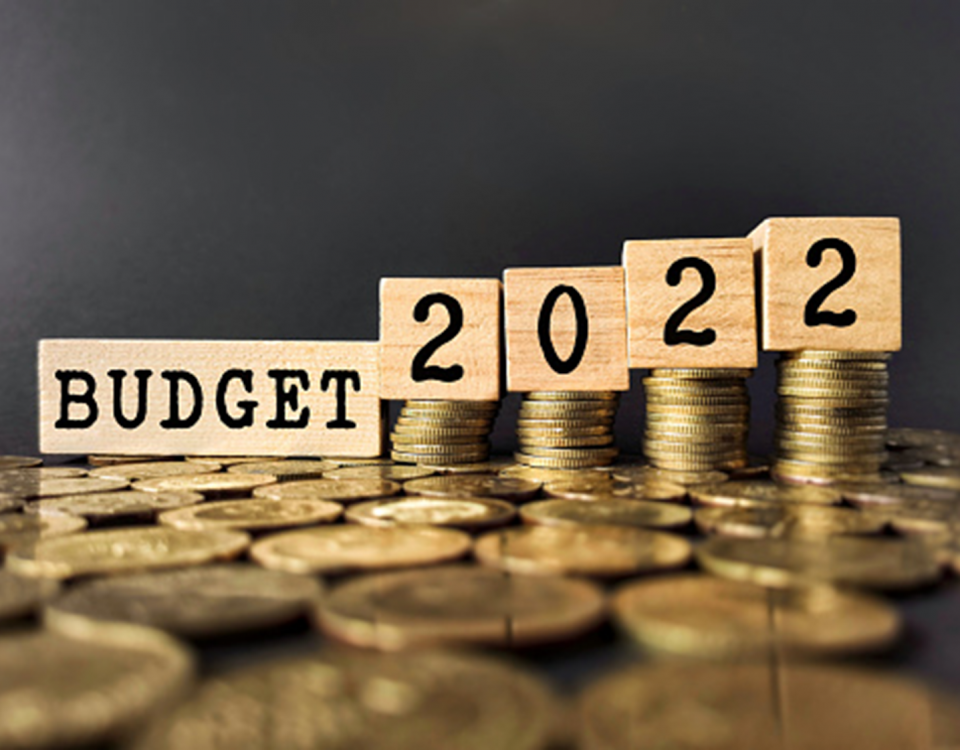