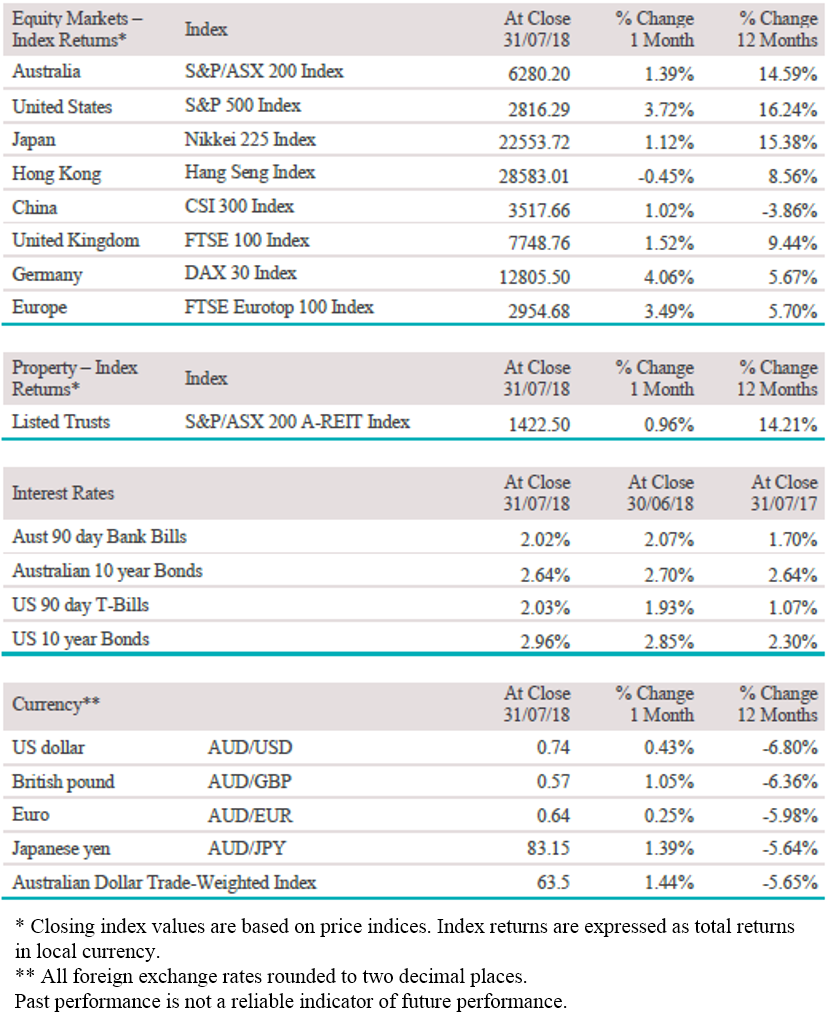 Uncertainty surrounding the global trade environment and concerns about the sudden rise of protectionist policies remain at the forefront of the economic narrative, but for now equity markets are focused on positive fundamentals. While financial market volatility has been constrained in recent months, there is a risk of higher volatility in the second half of 2018.

The US economy continues to power ahead in the face of geopolitical and trade tensions, but it remains to be seen if this is sustainable. US June quarter GDP shot to an annualised 4.1% according to the first estimate reading, which was in line with expectations, but based on factors that could prove temporary, including the impact of income and company tax cuts. The Atlanta Fed’s GDPNow estimate for September quarter growth is 4.4%, although this appears optimistic compared to the market’s assessment, which expects growth to pull back to around 3.0%. In Washington DC, the US Fed left the funds rate unchanged at its July/August meeting, noting that the labour market is strengthening and economic activity is rising at a “strong rate”. While President Trump announced he was not “thrilled” the Fed was raising rates, the market is expecting the next hike to come in September and one further hike before the end of 2018, which would bring the range to 2.25–2.50%. The manufacturing economy lost some steam in July, but the new orders index is still firmly in expansion, with the impact of tariffs still not significantly denting demand. Employment continues to grow, with July’s non-farm payroll release revealing an additional 157,000 jobs were added during the month, missing against the expected 193,000 but still enough to keep markets buoyed.

Despite improved labour market flexibility and ongoing structural reform, the eurozone economy is yet to show signs of sustained growth. According to a preliminary estimate, GDP growth across the euro member countries was 2.1% year-on-year at end June, down from 2.5% in the March quarter and continuing to pull back from the higher rates of growth seen in 2017, which were underpinned by strong export performance. The European Central Bank left rates on hold at its July meeting, and the very clear guidance from President Draghi is that they will stay that way until mid-2019 at the very earliest. Euro area inflation rose to 2.1% in July from 2.0% in June, driven by a 9.4% rise in energy prices, but the core rate, which excludes food and energy, is still very low at 1.1%. After five years of economic recovery, workers are finally seeing signs of meaningful wage growth with official data showing a 2.0% rise in the March quarter, with a promising lift in the negotiated wage component. In the UK, Prime Minister May is lurching closer to a ‘no-deal’ scenario after the EU rejected her customs plan as “magical thinking”. The EU’s proposal is for the UK to remain in the customs union, but this has been repeatedly rejected by May.

The latest round of Chinese data provides evidence of a further slowing in manufacturing activity, while the services sector is lifting its contribution to growth. The June quarter GDP data showed economic growth easing back to 6.7%, with the services sector growing by 7.6%, highlighting the evolution of the Chinese economy. The clampdown on shadow banking credit and the closure of inefficient capacity are proving to be headwinds in some parts of the economy, while rising incomes and living standards are boosting demand for consumer goods and services. July’s official PMI showed China’s manufacturing economy grew at its slowest pace in eight months, but more concerning was the marked contraction in new export orders, which dropped from 49.8 to 48.4. The downturn is likely partly related to the announcement of US tariffs, but may also reflect the slowdown in global trade already in place. The yuan continued to weaken through July and has fallen more than 5% against the US dollar since early April, raising the spectre of a 2015-style panic. The Chinese central bank has denied ‘weaponising’ the yuan as part of the broader trade conflict with the United States, but there are fears that China will guide its currency lower to stimulate exports.

In Japan, manufacturing and services PMIs indicated a moderate slowing in activity, with the headline Business Activity Index falling 0.1 points to 51.3. Japanese exports rose 6.7% in June, but exports to the United States—Japan’s largest trading partner—fell for the first time in 17 months in signs that the US-China tariff war is starting to have some spillover effects in neighbouring markets. The Bank of Japan’s Tankan survey for the June quarter recorded a fall in business sentiment as global trade tensions intensified, however other components pointed to a relatively robust quarter, holding at levels seen prior to the Global Financial Crisis. Japan’s economy likely returned to growth in the June quarter after contracting in March. A tightening job market and promising growth in real wages have given some hope to the Bank of Japan that it can combat the deflationary forces at work in the economy. According to the IMF, the Indian economy is expected to grow at 7.3% in 2018-19 and 7.5% in 2019-20, with a depreciating rupee supporting strong export growth. Inflation is expected to reach an average of 5.2%, which is well above the Bank of India’s 4.0% target, foreshadowing tighter monetary policy.

Given the risks within the household sector, the RBA is happy to sit on the bench, holding rates at 1.50% at its August meeting. While household debt and sluggish wage growth remain a concern, the business sector is enjoying favourable conditions, especially in the manufacturing, construction and business services industries. Perhaps the biggest surprise has been the strength in public sector investment and infrastructure, with public sector capex amounting to around $90 billion over the past year, around 5.5% of the economy and almost as large as the dwelling investment sector. Downside risks remain, with a tightening in lending conditions, partly in response to the Royal Commission into Financial Services, constraining households and the possibility of a sharp decline in house prices posing a challenge to the prudential system. House prices have been falling for the past nine months in Sydney and auction clearance rates remain in the low-60% range. Australia’s labour market continues to tighten, with 50,900 jobs added in June. Over the past 12 months, full-time jobs have grown 2.5% and part-time jobs have grown 5.2%, reflecting the broader trend of increasing part-time employment share.

The S&P/ASX 200 Index returned 1.4% in July, with gains from the Industrials (+3.5%), Health Care (+2.1%) and Financials (+2.1%) sectors. The Telecommunications sector (+7.9%), which is dominated by Telstra (+8.4%), appeared to recover as attention turned to the much-anticipated 5G spectrum auction, putting a halt to a seven-month slide. Brambles (+11.3%) built on positive sentiment ahead of its full-year earnings release in August, despite its US operations continuing to drag. The Consumer Discretionary sector (+2.1%) saw mixed results in July, with headlines dominated by Nine’s $4 billion takeover of Fairfax. Shares in Fairfax Media (+8.0%) jumped on the news, while Nine Entertainment (-9.7%) fell as a result, which is not unusual for a company launching a major deal but nevertheless reflects some market scepticism. The deal will need to be approved by Nine’s shareholders in November. Major energy suppliers AGL Energy (-2.2%) and Origin Energy (-2.2%) came under pressure following the ACCC’s release of recommendations aimed at improving access for new entrants. Australian small cap performance, measured by the S&P/ASX Small Ordinaries Index, returned -1.0% in July but is still beating its large-cap peers over a 12-month period. 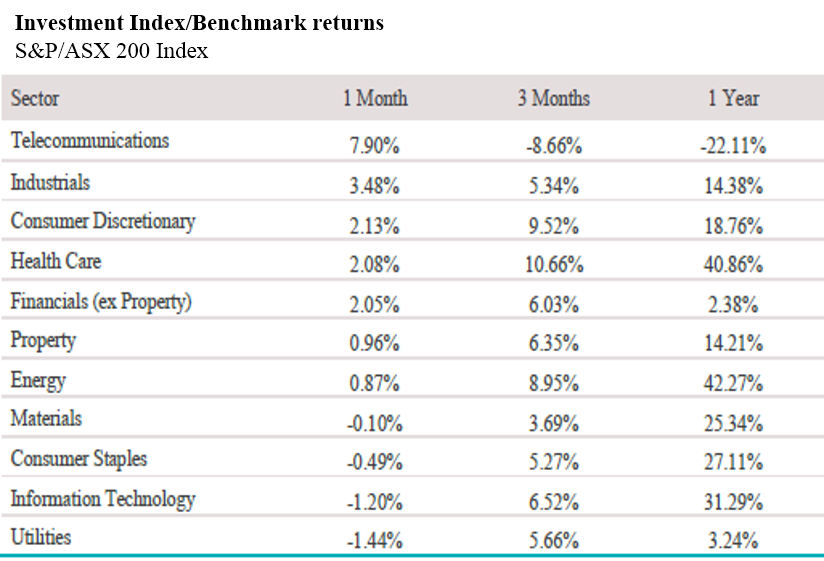 Global developed market shares, measured by the MSCI World Ex Australia Index, returned 2.6% in Australian dollar terms and 2.7% in local currency terms, driven predominately by US and European performance. US indices were higher on the back of a broadly positive earnings round, with Apple (+2.8%) rising modestly in July before surging to an historic $1 trillion market cap after announcing higher than expected revenue and EPS growth. But it was a very different story for Facebook (-11.2%), which plummeted after a revenue miss and lower than expected growth in Daily Active Users (DAUs), forcing the stock to retreat to its May market cap. The US S&P 500 Index returned 3.7% in July, led by Industrials (+7.3%), Health Care (+6.5%) and Financials (+5.2%). US banks had mixed earnings results, with JP Morgan Chase (+10.2%) beating estimates, while Citigroup (+7.4%) and Wells Fargo (+3.3%) missed. In Europe, the broad STOXX Euro 600 Index rose 3.1%, led by Health Care (+6.3%) and Banks (+4.3%), while Basic Resources (-1.6%) were down. In Asia, Japan’s Nikkei 225 Index returned 1.1%, Hong Kong’s Hang Seng fell 0.5%, and China’s CSI 300 Index rose a modest 1.0% after falling 7.0% in the previous month.

The S&P/ASX 200 A-REIT Index returned 1.0% in July as the inflationary outlook in the US eased and bond yields were steady. The retail A-REIT sector, which dominates the broader A-REIT market, has underperformed over the past year, with the woes of large retail anchor tenants such as Myer and Target having a negative impact on sentiment. However, these concerns have started to alleviate, with the sector bouncing back from its previously oversold position in recent months. Some delays in the rollout of Amazon in Australia have also provided some support. Mirvac Group (+5.1%) and Stockland (+4.5%) were the top performers in July, recording strong settlements despite concerns about a weakening housing sector. Globally, developed market property rose 0.9% on a hedged basis in July. US REITs underperformed global markets, with the Bloomberg US REIT Index up 0.7%, led by the Regional Mall (+3.6%), Single Tenant (+2.6%) and Apartment (1.8%) sectors.

Bond markets were relatively muted through July as central banks left rates on hold and trade-related fears were put to one side as investors focused on earnings and positive economic data. Globally, the Barclays Global Aggregate Index was flat in AUD hedged terms, with US 10-year yields holding below 3.0%. Despite anticipation leading up to the US auction of US$26 billion of treasury bonds in August, yields were only slightly impacted. Concerns remain about yield curve flatness, with the spread between US 2-year and 10-year Treasury yields narrowing to 24 basis points in July—the tightest it has been since 2007. Some observers, including former Fed chairman Ben Bernanke, suggest the yield curve is a less reliable indicator than it once was, with the signal distorted by central bank balance sheets and quantitative easing measures still in place in Europe and Japan. Locally, Australian bonds returned 0.2% in July, with Australian corporate debt returning 0.2% and government debt returning just over 0.1%, while long-term government bonds (with a maturity of ten years or more) returned less than 0.1%.

The Australian dollar rose against major currencies in July, including the US dollar (+0.4% to 0.74), British pound (+1.1% to 0.57), euro (+0.3% to 0.64) and Japanese yen (+1.4% to 83.15). Strong relative growth and rising interest rate differentials have supported the US dollar in recent months, but the US dollar index was mostly flat in July, with core inflation measures steady and the Fed holding fire on rates. With the Fed expected to lift rates by 50 basis points before the end of 2018, further downside in the AUD is to be expected.

The information contained in this Market Update is current as at 12/08/2018 and is prepared by GWM Adviser Services Limited ABN 96 002 071749 trading as ThreeSixty Research, registered office 105-153 Miller Street North Sydney NSW 2060. This company is a member of the National group of companies.