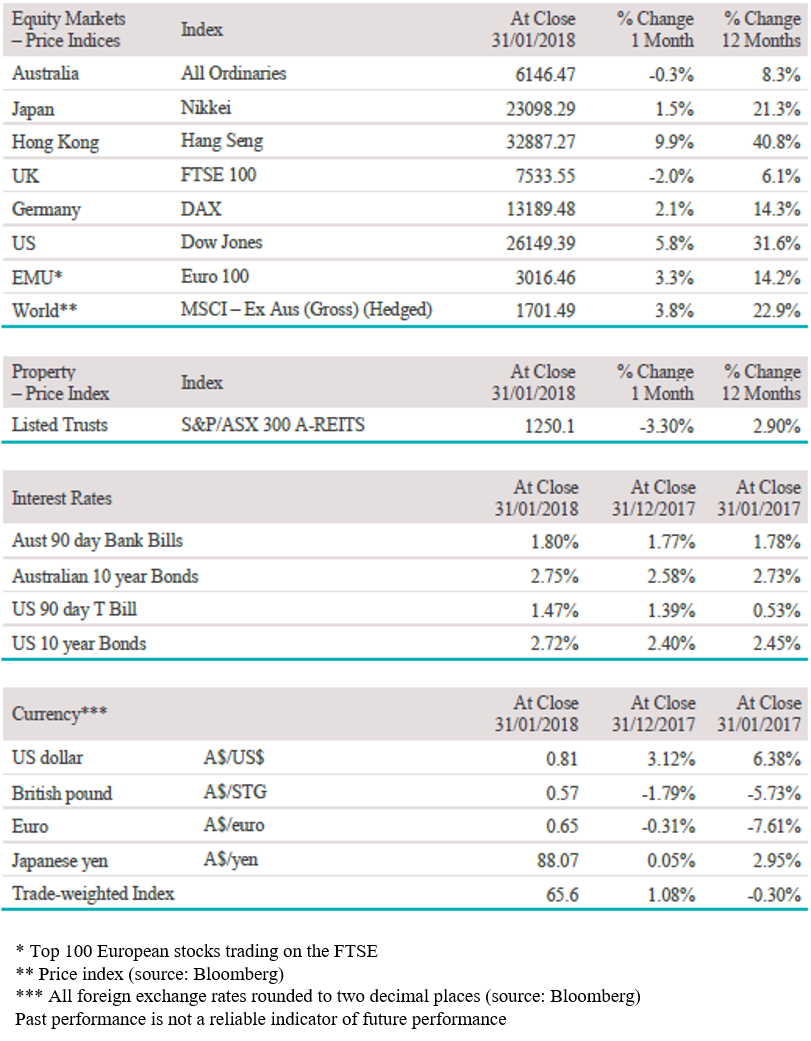 The start of 2018 saw a moderation in economic data from major developed markets, although business investment and favourable employment conditions are providing a solid foundation for growth. While inflation remains below target in advanced economies, central banks have begun the process of gradually tightening monetary policy.

The US economy ended 2017 on a slightly shaky footing, with the first estimate of Q4 GDP recording growth of 2.6%, slowing from Q3’s growth of 3.2% and lower than the market’s anticipated 3.0%. Imports, which subtract from GDP growth, increased at their fastest rate in more than seven years, highlighting the challenge facing the Trump administration in achieving its 3.0% growth target. The manufacturing economy expanded in January, although at a slightly slower pace on December, with the ISM manufacturing PMI falling from 59.3 to 59.1. The core PCE index – the Fed’s preferred measure of inflation – was steady at 1.5% year-on-year for December, still below the headline rate of inflation and stubbornly at odds with overall growth and employment conditions. Non-farm payrolls rose 200,000 in January, beating the market’s expected 184,000 and providing further evidence of an improving jobs picture. To date, wages growth and inflation have remained well-behaved, but markets have continued to reassess the outlook for the Fed funds rate, taking the US 2-year bond yield above 2% for the first time since September 2008 and the 10-year yield to just above 2.7%.

Euro area GDP grew by 0.6% in Q4 (2.7% year-on-year), slightly lower on Q3’s growth of 0.7% (2.8% year-on-year). Recent survey data shows that manufacturing is growing at the fastest rate in over two decades, while the services sector enjoyed its best year since 2007. Major European shares leapt to record earnings early in 2018, despite a rising euro and falling US dollar. However, the eurozone may become a victim of its own success if the currency rises too quickly. While the ECB does not target the currency, it has flagged its concern that cheaper imports could prevent inflation from taking hold. Employment growth is at a 17-year high and price pressures are the highest in over six years. Germany’s GDP grew 2.2% in 2017, the fastest rate since 2011, with growth boosted by higher consumption and the highest employment numbers since reunification. The ECB’s January policy vote revealed a continued shift in rhetoric, pointing to strong cyclical momentum and rises in private consumption and business investment. In early February the EU upped its growth forecast for 2018 from 2.1% to 2.3%, which is broadly in line with ECB and IMF projections.

The Chinese economy slowed marginally in the December quarter, with GDP growth falling to 6.8% after averaging 6.9% in the first three quarters of 2017. A clampdown on factory pollution, a further lift in borrowing rates, and tighter financial conditions in the shadow banking sector are likely to have dampened growth. China has already experienced a decline in fixed investment spending, with growth of just 7.2% year-on-year in December, while many housing and property activity indicators are pointing to a slowdown after a recovery in 2016. Industrial production recovered slightly from 6.1% year-on-year to 6.2% in December, while January’s official PMI was 51.3, down from 51.6 in December and below expectations. Overall, it appears that the authorities feel it is prudent to restrain growth, particularly while the global backdrop is relatively stable. Interest rates for corporate borrowers increased on average by close to 50 basis points in 2017, and this may see a slowdown in 2018.

The latest Nikkei Manufacturing PMI survey for the Asia region (excluding mainland China) showed a strong start to 2018. Nine of the 11 Asian economies surveyed saw an expansion of manufacturing activities in the month, with the ASEAN region returning to growth after contracting at the end of 2017. The upbeat figures echo the IMF’s optimism, which revised its global growth outlook to 3.9% for both 2018 and 2019. In Japan, the Tankan survey showed the best business conditions for big manufacturers since 2006. The Bank of Japan kept overnight interest rates steady at -0.1%, maintaining its target for 10-year Japanese government bonds at around 0.0%, and indicating it will continue to purchase bonds at “more or less the current pace” of ¥80 trillion per year. The Bank expects domestic demand to grow and exports to “continue their moderate increasing trend on the back of the growth in overseas economies”.

The economic outlook for Australia has improved in recent months with evidence of a recovery in business investment now complementing the very strong labour market and business conditions data. The RBA’s February monetary policy statement was undeniably more bullish compared to its December release, but nevertheless the board opted to keep the cash rate on hold at 1.50%, with inflation still low but expected to move higher. Australia’s CPI reading for the December quarter was 0.6% (1.9% over 12 months), unchanged on the September quarter. While slightly below expectations, and all but scuppering any possibility of a rate hike, inflationary pressures appear to be gradually taking hold nationally, although this is mostly evident in the eastern states. Employment conditions continue to improve, with total employment growth of 3.4% through 2017, and full-time employment growth a solid 3.7%.

The S&P/ASX 200 Accumulation Index fell 0.5% in January, pulled down by yield-sensitive utilities and property. Positive returns were achieved by the healthcare sector (+3.2%), driven by large gains from Sirtex Medical (+66.2%) following a proposed $1.6 billion takeover bid from US cancer care provider Varian, and gains from Resmed (+13.5%), with the sleep disorder device maker announcing a 13% lift in sales revenue for the second quarter. The IT sector (+2.0%) also managed to gain, led by Altium (+14.7%), along with solid returns from Wisetech Global (+9.5%) and Computershare (+2.5%).

Defensive sectors such as utilities (-4.5%) were down, with AGL (-3.8%) and APA Group (-3.2%) lower, along with industrials (-2.1%) and the major financials sector (-0.8%). Banks came under pressure after a flat month in December, offset by gains from asset managers including Perpetual (+8.3%) and IOOF Holdings (+2.8%). The modest fall in Australian shares was of course only a taste of what was to come in early February, with a global sell-off leading to a 4.7% drop in the ASX 200 and hitting defensive shares and small caps the hardest. 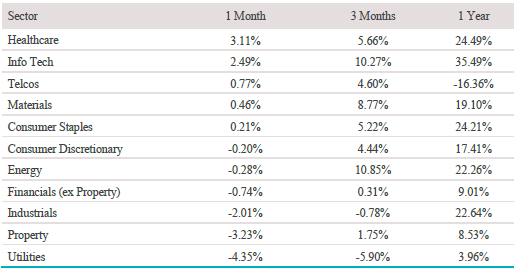 The MSCI World ex-Australia Index returned 3.9% in January in local currency terms and 1.8% in Australian dollar terms. The US S&P 500 Index rose 5.6% in US dollar terms, pushing to a new record high of 2690.16 points during the month, before dropping early in February as the market underwent a major correction and volatility spiked. January’s gains were driven by the consumer discretionary (+9.3%) and IT (+7.6%) sectors, with strong leads from Netflix (+40.8%) and Amazon (+24.1%), while Apple (-1.1%) was down after a lacklustre quarter. In Europe, the broad STOXX Euro 600 Index rose 1.6%, driven by financials and resources, while in Asia the Chinese CSI 300 Index rose 6.1%, Japan’s Nikkei 225 Index gained 1.5%, and Hong Kong’s Hang Seng added 9.9%.

The S&P/ASX 300 A-REIT Accumulation Index (which includes distributions) fell 3.25% in January, with higher yields bringing the sector under pressure. Arena REIT (+1.3%) was able to defy the trend with a positive return in January after falling through December, but diversified managers including Abacus Property (-9.9%) and Mirvac Group (-6.4%) felt the heat from their commercial property portfolios. Globally, the EPRA/NAREIT Developed Market Index (AUD hedged) fell 1.3%, outperforming domestic REITs but still underperforming over longer periods. US REITs, measured by the MSCI US REIT Index, had a rough start to the year, falling 4.3%, but with the first earnings reports of the season showing positive signs on the back of strong retail sales.

The information contained in this Market Update is current as at 09/02/2018 and is prepared by GWM Adviser Services Limited ABN 96 002 071749 trading as ThreeSixty Research, registered office 105-153 Miller Street North Sydney NSW 2060. This company is a member of the National group of companies.