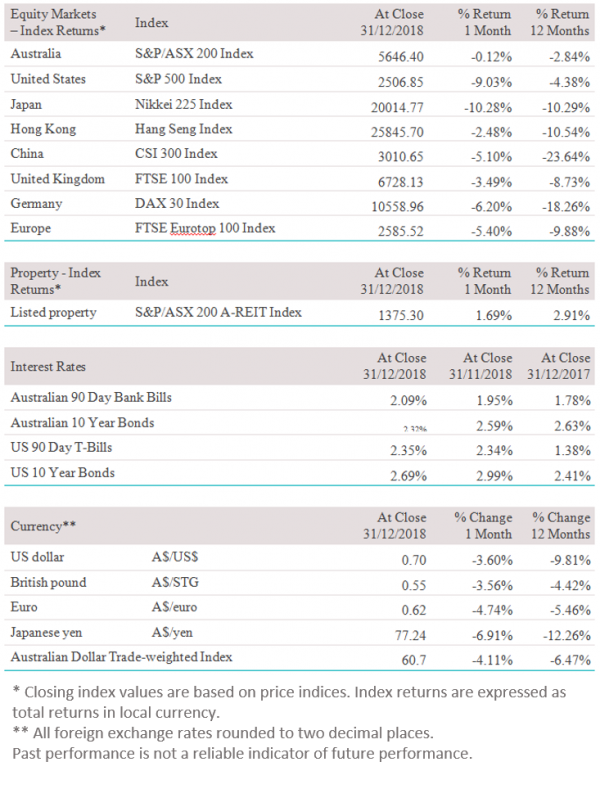 The new year has started on a downbeat note as markets continue to worry about softer economic growth globally and a possible peak in US corporate earnings. Hope remains that a trade deal can be struck between the US and China, but in the meantime trade tensions have had a significant impact on factory activity in Asia, while temporary boosts to US GDP appear to be fading.

The US Fed lifted the target funds rate to a range of 2.25–2.50% as markets had long anticipated, but the move was not entirely without doubt given recent market volatility and concerns over slower economic growth. The Fed lowered its forecast for 2018 GDP growth from 3.1% to 3.0% and reduced its 2019 forecast from 2.5% to 2.3%. While 2018 saw the three rate hikes markets expected at the start of the year, the FOMC is now more dovish in its outlook, reflected in Fed Chairman Jay Powell’s comment that “it is more likely the economy will grow in a way that calls for two rate increases next year.” US September quarter GDP grew by an annualised 3.4%, revised down 0.1 points from the previous estimate, with consumer spending growth marked down from 3.6% to 3.5% and fixed investment down from 1.4% to 1.1%. While fiscal stimulus measures have supported growth, there are signs that the economy is losing momentum amid a widening trade deficit, sluggish business spending and housing market weakness which is likely to put pressure on households. The Atlanta Fed’s GDPNow estimate of growth for the December quarter was 2.8% as at 8 January. Non-farm payrolls for December showed 312,000 jobs added, well ahead of expectations, while core inflation for November came in at 2.2% as expected.

Eurozone GDP growth continues to disappoint, rising 0.2% in the September quarter according to December’s estimate. In Germany, the growth picture continues to be clouded by developments in the auto industry, with major car manufacturers having problems certifying vehicles in accordance with the new exhaust and consumption standards. The IHS Markit Europe Sector PMI showed further falls in output for autos, driven by a drop in new orders, while purchasing of inputs contracted at the sharpest rate since March 2013. Meanwhile, PMI data point to continued slowing in the European economy, with the IHS Markit Eurozone Composite PMI recording the slowest growth in over four years, falling from 52.7 to 51.1 in December. The slowdown in part reflects the ongoing protests in France, which have impacted industrial production and services. France’s national statistics institute reported that growth is expected to slow from 0.4% to 0.2% in the December quarter. Meanwhile, the ECB ended its asset purchase programme in December, which has resulted in the purchase of around €2.6 trillion worth of debt (predominately government bonds) since March 2015. The market reacted nervously to the removal of monetary support, with concerns focused on Italy, which would experience the most pain should interest rates rise given its high debt-to-GDP ratio of over 130%.

China’s official manufacturing PMI fell from a flat 50.0 to 49.4 in December, marking the first month of contraction since July 2016, driven by the domestic economic slowdown and the ongoing trade dispute between Beijing and Washington DC. New export orders contracted for the seventh month in row. At the start of December, Chinese President Xi Jinping and US President Trump were able to negotiate a 90-day delay to the implementation of tariffs due to be introduced on 1 January 2019. Trade talks resumed at the start of January, with the world watching closely to see if any breakthrough can be made, or if the US will make good on its threat to impose tariffs on a further US $200 billion worth of Chinese exports. The People’s Bank of China cut the reserve requirements for the country’s commercial banks, effectively injecting US $117 billion of liquidity into the banking system, while also urging them to lend to small- and medium-sized businesses. The authorities are also beginning to ramp up stimulus spending, approving a US $125 billion rail project, which will add 6,800 km of track (a 40% increase on the distance added in 2018). Markets might be hoping for full-blown stimulus measures like those seen in 2009 and 2015 which supported global demand, but this seems like wishful thinking. Chinese officials have stated that the economy is still likely to reach its 2018 growth target of 6.5%.

The Japanese government revised down its forecasts for GDP growth and inflation following an economic contraction in the September quarter. Growth is forecast at 0.9% for the 2018 fiscal year (which ends in March 2019), down from the previous projection of 1.5%, while fiscal 2019 growth is estimated to be 1.3%, down from 1.5%. Japan’s manufacturing PMI rebounded in December from 52.2 to 52.6, ending 2018 with a strong upturn in production, although growth in new orders was muted and export sales declined. The services sector PMI fell from 52.3 to 51.0, reflecting poor weather and underwhelming sales, while survey data pointed to cooling cost inflation. In other parts of Asia, manufacturing PMIs for export reliant countries such as South Korea and Taiwan have dipped below the 50-point level indicating expansion, partly due to the US-China trade dispute, which has had a broader impact on factory activity throughout Asia. The World Bank has forecast India’s GDP to grow at 7.3% during 2018-19, remaining the fastest-growing major economy in the world. Growth is forecast to rise to 7.5% in the subsequent two years as temporary impacts such as those caused by demonetisation and the implementation of the GST fade.

The RBA’s December minutes revealed that members were wrongfooted by the September quarter GDP release, which came in lower than expected at 2.8% year-on-year compared to an expected figure of over 3.0%. Members noted that the outlook for household consumption is uncertain due to low income growth and relatively high levels of household debt, together with declining property prices. However, the bank still expects steady growth in consumption supported by robust labour market conditions and a gradual pickup in wage growth. Australian housing prices fell 4.8% in 2018 according to CoreLogic, driven by sharp falls in the Sydney (-8.9%) and Melbourne (-7.0%) markets. Sydney house prices fell 1.8% in December, representing the 15th consecutive monthly fall, while the fall across all capital cities was 1.3%. According to the ABS, price falls are now also evident in the middle and lower segments of the market, while auction clearance rates and volumes are trending lower. Treasurer Josh Frydenberg called on the banks to keep their books open to ensure “affordable, accessible and timely loans”. In trend terms there are still signs of labour market momentum, with 171,500 full-time jobs added through 2018 to the end of November.

The S&P/ASX 200 Index returned -0.1% through December, rebounding in the first week of January 2019 as Wall Street recovered slightly from a horror end to 2018. The ASX outperformed global shares, holding up well compared to other major markets. Volatility, measured by the ASX 200 VIX Index, remained elevated through December, rising above 20.0 before easing slightly into the new year. Materials (+5.3%) was the best performing sector in December, with BHP (+11.5%) rising on the back of news that it will pay a special dividend of US $1.02 per share (A $1.42) following the completion of its US $5.2 billion share buyback, while Rio Tinto (+7.1%) ended the month higher after confirming the sale of its Grasberg mine interest in Indonesia. Gains in the Health Care sector (+2.9%) were led by pharmacy distribution business Sigma Healthcare (+16.3%) following a merger proposal from rival Australian Pharmaceutical Industries (-5.8%), the owner of pharmacies Priceline and Soul Pattinson. Within the Communications sector (-5.1%) it was a tough month for media, with Nine Entertainment (-21.4%) still struggling after its high-profile acquisition of Fairfax, while telcos were also in negative territory as the ACCC voiced concerns over the proposed merger between TPG (-10.4%) and Vodafone. 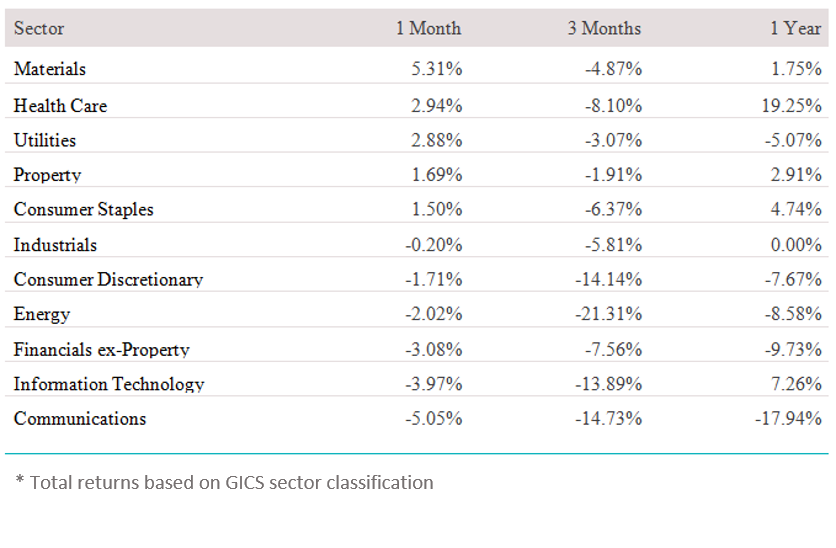 Global shares fell 4.4% in Australian dollar terms in December as major developed markets plummeted on fears of slowing global economic growth and the prospect of an escalation in trade conflict. The US S&P 500 Index fell 9.0% in December, dropping to a low of 2351 points (its lowest level since April 2017) and recovering to above 2500 in the new year. Trade tensions between the US and China continued to impact markets, while a standoff between the Trump White House and Congress over immigration and the funding of a border wall has created additional uncertainty, resulting in a partial shutdown of some government departments. The start of the new year greeted Apple (-11.7%) investors with lower guidance for its first quarter, which pointed to a significant drop in operating income on the previous year. Higher prices for the iPhone has been offset by weaker demand, most obviously in China. The STOXX Europe 600 Index fell 5.6% in local currency terms, with the Retail (-8.0%), Bank (-7.7%) and Auto (-7.2%) sectors hardest hit. In Asia, Japan’s Nikkei 225 Index fell 10.3% in local currency terms and China’s CSI 300 Index dropped 5.1%.

The S&P/ASX 200 A-REIT Index returned 1.7% in December as the outlook for interest rate rises softened and bond market yields fell. Shopping centres came under slight pressure in December, with mild under performance from Shopping Centres Australasia (-0.7%) and Vicinity Centres (+0.4%), but overall the sector has maintained its high occupancy rates in the face of the online onslaught. On the other side of the equation, industrial property manager Goodman Group (+3.7%), whose biggest tenant is Amazon, saw a 26.2% rise in its share price over 2018. Viva Energy REIT (+8.7%) was the top performer in December, with investors attracted to its relatively high yield and low levels of leverage that allow for some debt-funded growth. December saw the completion of Oxford Properties’ $3.4 billion all-cash acquisition of the Investa Office Fund, consisting of investment grade office buildings in Australia’s CBDs. While Australian REITs were able to stand their ground in December, the fate of global listed property was tied to the deep falls in equity markets, which saw developed market REITs outside of Australia fall 6.3% in hedged terms. US REITs were no exception, falling 8.5%, with the biggest falls coming from Hotels (-13.4%), Offices (-11.7%) and Malls (-11.0%).

Global bonds measured by the Barclays Global Aggregate Index returned 5.8% in December in Australian dollar unhedged terms and 1.4% in hedged terms as yields in major developed markets fell through December and early January. The end of the ECB’s quantitative easing was expected to put upward pressure on European yields, even in Germany where there is a relative scarcity of safe government Bunds, but so far there are few signs of this happening. The US 10-year Treasury yield fell from 2.99% to 2.69% in December, before dropping as low as 2.55% in early January 2019. Similarly, the Australian 10-year Treasury yield fell from 2.59% to end 2018 at 2.32% before falling further to 2.18% in the new year. Germany’s 10-year Bund yield fell from 0.31% to 0.24% in December, while the 5-year yield fell further into negative territory from -0.27% to -0.32%. Japan’s 10-year government bond yield also dipped into negative territory, falling from 0.087% at the start of December to -0.045% in early January 2019. In December yields on US 2-year government bonds rose above those for 3 and 5 years for the first time since 2008, while the spread between the 10- and 2-year Treasury yield narrowed to below 11 basis points, raising fears of a potential economic recession.

The Australian dollar resumed its fall in December, reaching a 10-year low of US $0.6715 in early January 2019 as the Chinese economic picture weakened, only to bounce back above $0.71 on hopes that progress can be made towards a trade settlement between the US and China. Over 2018 the Australian dollar fell 9.8% against the US dollar driven by the interest rate differential between the two countries.