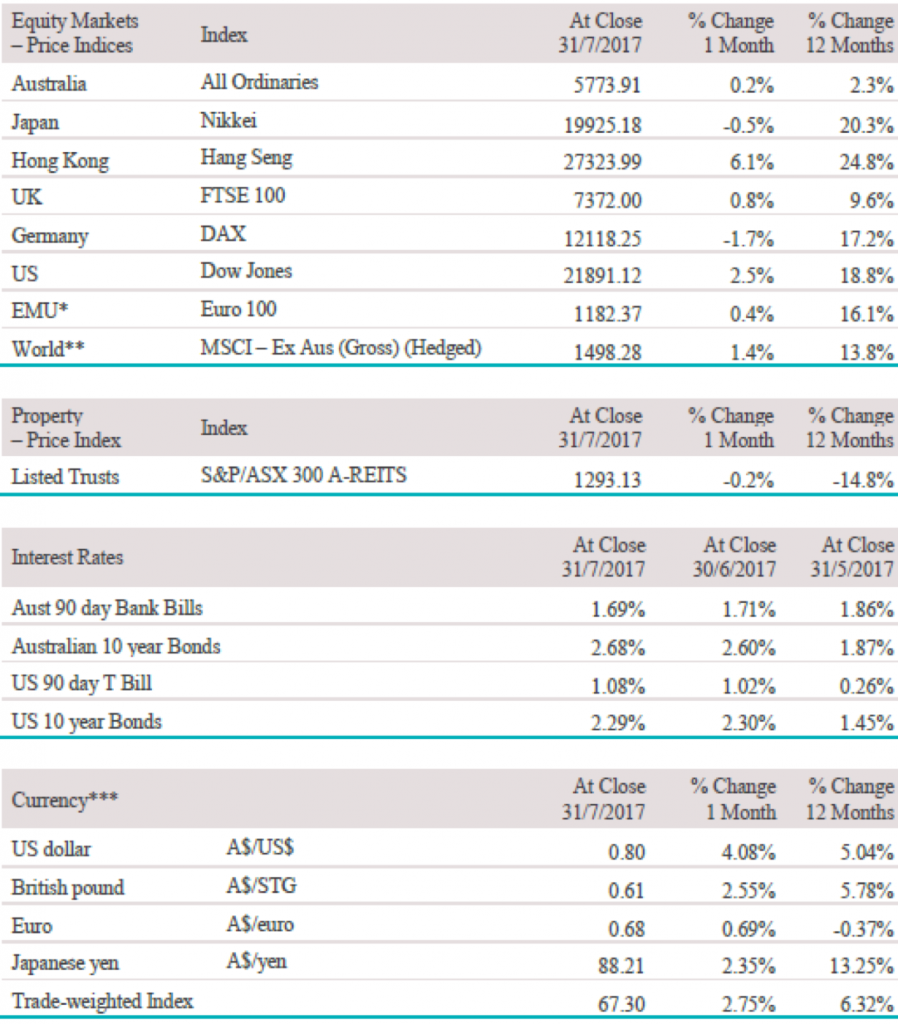 Economic data has continued to be relatively good in July, however, many of the “soft” indicators, based on business and consumer surveys, have weakened from their post-US election highs as Donald Trump continues to struggle to deliver on his election promises.

GDP figures for the June quarter confirmed that the US economy continues to grow at around 2% per annum, well below the 3% level targeted by Donald Trump and below the levels suggested by business and consumer surveys in early 2017. However, the post-election optimism in many of these surveys has now begun to unwind with the most recent ISM manufacturing and services sector reports both showing softer levels of activity. Inflation and wages growth have also stalled recently at levels below where the US Federal Reserve would like them to be, and investors have interpreted this as a sign that interest rate rises will be slower than the Fed’s own dot point forecasts.

In the Eurozone, economic growth rates have picked up from 1.9% year-on-year in the March quarter to 2.1% in the June quarter and unemployment has declined further, now at 9.1%, which is the lowest since the global financial crisis. Against this backdrop, the European Central Bank has dropped its reference to “downside risks” in its outlook for the European economy and this allows it to gradually move towards tapering of its €60 billion per month in asset purchases later this year with interest rate rises in 2018.

Chinese data released over the past month has shown that the economy there continues to perform relatively well with stable annual growth of 6.9% in the June quarter, supported by property and infrastructure construction. Other indicators such as industrial production, international trade, retail sales and fixed asset investment also paint a picture of an economy that is performing well. The Chinese government continues to be concerned with corporate leverage and recently instructed State-Owned Enterprises to reduce their borrowings, although it is too soon to determine what impact this may have on the broader economy.

In Japan, the consumer price index rose an as expected 0.4% year-on-year in June, however, the Bank of Japan’s preferred measure of core annual inflation remained stuck at zero for the third consecutive month. Meanwhile the June employment report in Japan remained strong, with the unemployment rate falling back down to 2.8% after being a little higher in June. Real spending by Japanese households was stronger than expected, rising 2.3% year-on-year in June, suggesting that although core inflation remains non-existent, consumers are more confident about their jobs and therefore more willing to spend.

In Australia, most of the data released in the past month has been in line with expectations, which usually means that it has followed recent trends. The unemployment rate remained stable at 5.6% in June, the core annual rate of inflation was stable at 1.8% in the June quarter and the RBA kept interest rates on hold in early August. Most of the recent commentary from the RBA has suggested that they see growth and inflation picking up and unemployment falling further over the next couple of years, but that they are in no hurry to lift interest rates.

The All Ordinaries Index rose just 0.2% in July 2017. For the second consecutive month the market traded sideways in spite of modest gains made in the US and strong gains in emerging equity markets. Within the Australian stock market the underperformers were healthcare stocks (-7.5%), utilities (-5.3%) and telecommunications (-4.2%). Healthcare stocks were subject to profit-taking as valuations were extremely rich approaching reporting season and investors worried about the risks of the strong Australian Dollar impacting earnings. Utilities shares sold off on slightly higher bond yields but also valuation concerns. The falls in the telecommunications sector was predominantly due to concerns regarding the sustainability of Telstra’s earnings and dividend. The best performing sectors were materials (+3.5%) and financials (+1.2%). Materials shares were largely impacted by strong commodity prices but also helped by investors becoming more comfortable with the large miners returning profits to investors rather than investing in some of the dubious investments they have embarked on in the past. 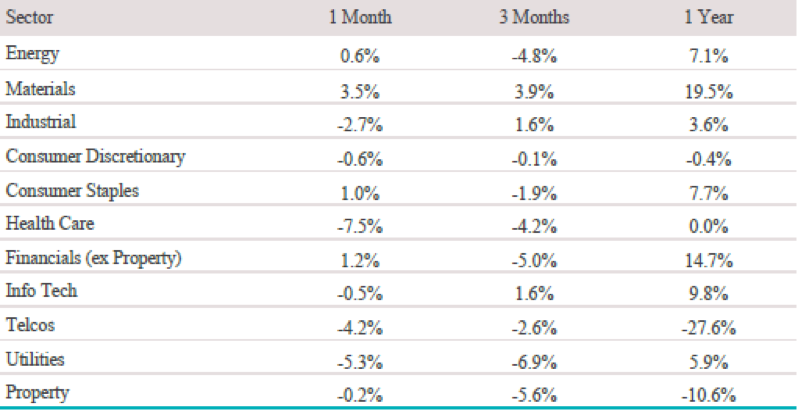 Developed market international equities returned 1.5% in local currency terms and -1.6% in Australian Dollar terms. The information technology sector was the best performing sector in the MSCI World index over the month (+3.8%), supported by strong earnings results from large capitalisation technology companies such as Apple. Energy and materials shares enjoyed returns of 2.4% and 2.9% respectively helped by rising commodity prices which tend to move in the opposite direction to the US Dollar. Interest rate-sensitive defensive sectors including telecommunications (+3.4%) and utilities (+1.3%) recovered some of their losses from the prior month while consumer staples (-0.3%), healthcare (-0.4%) and industrials (-0.2%) posted small losses.

Internationally, the Bloomberg Barclays Global Aggregate Bond Index (A$ hedged) returned 0.37% as bond yields fell slightly in the United States and United Kingdom but rose in Germany. In the US, the 10-year Treasury bond yield fell from 2.30% per annum to 2.29% as investors continued to forecast a lower inflation trajectory than the US Federal Reserve. Bond yields were marginally higher in Europe as the ECB removed references to downside economic risks in preparation for eventual lifting of interest rates.

The information contained in this Market Update is current as at 10/08/2017 and is prepared by GWM Adviser Services Limited ABN 96 002 071749 trading as ThreeSixty Research, registered office 105-153 Miller Street North Sydney NSW 2060. This company is a member of the National group of companies.