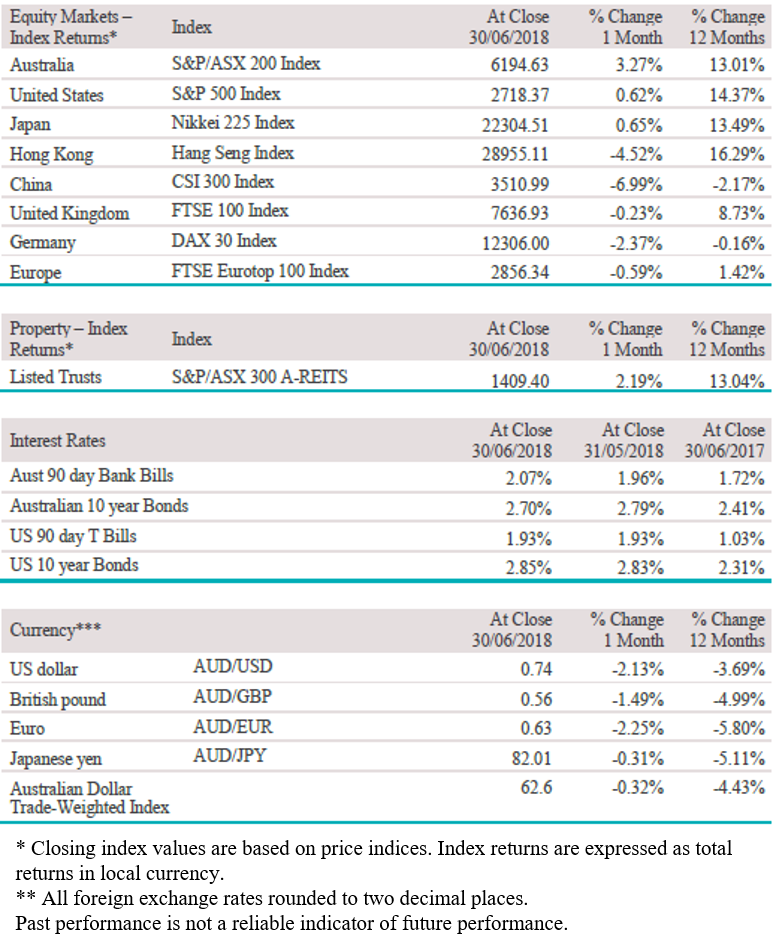 The synchronised global growth story has found itself under threat from escalating trade tensions, European political risks, and a slowing Chinese economy. These risks emerge in the context of tightening monetary policy globally, as inflation slowly moves higher in line with central bank targets. Despite labour market tightness, wage growth is not yet sustainable and household sectors remain exposed.

The US March quarter GDP was lower than previously estimated, weighed down by the weakest consumer spending in almost five years. June’s third estimate reading showed growth at an annual rate of 2.0%, down 0.2 points on the previous estimate. While Trump’s $1.5 trillion tax cuts are expected to provide a boost to consumer spending in the June quarter, the tit-for-tat tariff war with major trading partners—including China, Canada, Mexico and the EU—could prove a drag on growth, putting pressure on supply chains and possibly undercutting business investment. June’s core CPI rate pushed from 2.1% to 2.2% year-on-year, while the core PCE index—the Fed’s preferred measure—rose from 1.8% to 2.0% and is now sitting at the Fed’s inflation target for the first time since April 2012. Labour conditions remain tight, but jobs growth continues to surprise, with a greater than expected 213,000 jobs added in June. The ISM manufacturing PMI rose 1.5 points in June to 60.2, with a shortage of skilled labour and materials failing to put a dent in production. Despite the continued tightening, wage growth has failed to budge, steady at 2.7% year-on-year and falling short of the forecast 2.8%.

Headline inflation in the eurozone rose from 1.9% to 2.0% in June, although this was due mostly to an 8.0% rise in energy prices. Underlying price pressure remains weak, with the core CPI falling from 1.1% to 1.0%. While the ECB announced an end to its bond-buying program by the end of 2018, monetary policy is likely to remain very accommodative. In the ongoing trade saga, the US has threatened to impose higher tariffs on European automakers, with President Trump accusing the EU of unfairly targeting US car makers. German Chancellor Angela Merkel signalled her willingness to lower auto tariffs, contingent on agreement from Germany’s ‘big five’. Meanwhile, the IMF issued its own warning for the German economy: while growth is forecast to continue at 2.2% in 2018 and 2.1% in 2019, a trade war or banking crisis would strike a severe blow to confidence. In Italy, the governing coalition of right-wing parties has solidified its economic program. Adding both tax cuts and universal basic income in its first budget, they have shown both voters and markets that it is not backing down from its agenda. Meanwhile, UK Prime Minister May’s attempt to work out a Brexit negotiation plan has resulted in high political drama with the resignation of pro-leave ministers.

China’s economy continues to show signs of fatigue, with slowing credit growth and infrastructure spending pointing to softer economic growth for the June quarter. June’s official PMI figure showed a further loss of momentum in the manufacturing economy, falling from 51.6 to 51.5, while industrial production also fell 6.9% to 6.8% year-on-year. Chinese firms have felt the pinch from the government’s measures to curb risky lending, resulting in higher borrowing costs and reduced access to funds for smaller companies. The People’s Bank of China (PBOC) responded by cutting reserve requirements for the major state-owned banks—the third such move in 2018. On 6 July, US tariffs on US$34 billion worth of Chinese goods came into effect, with China responding in kind with tariffs on American soybeans, pork and electric vehicles. The major fear for markets is that these tit-for-tat tariff rises will result in a prolonged trade conflict. PBOC Governor Yi Gang said China will “keep the yuan exchange rate basically stable at a reasonable and balanced level”, and said recent weakness was the result of market fluctuations and not central bank guidance.

Revised GDP data confirmed that the Japanese economy shrank by an annualised 0.6% in the March quarter, putting an end to eight consecutive quarters of growth. This places Japan at risk of a technical recession (defined as two consecutive quarters of negative growth), and while the contraction was caused by temporary factors, a strong rebound appears unlikely. Consumer spending fell by an annualised 3.9% in May, well below expectations, while the latest manufacturing PMI showed a contraction in export orders, possibly due to broader trade-related uncertainty. Wage growth remains strong, rising 1.3% in May, with a tight labour market expected to boost inflation expectations. In a surprise move, the Japanese government announced plans to allow up to 500,000 guest workers into the country to ease labour shortages in key sectors. Mounting consumer price pressures are still a concern for the Bank of India, with a rallying oil market and an increase in the government’s minimum support price for farmers ahead of next year’s election set to drive inflation.

Australian economic growth is on a sound footing, supported by a bounce in global growth, a strong commodities sector, and improved business and public sector investment. However, while there has been a surge in employment and hours worked over the past year, momentum has slowed from 2017’s pace, and wage growth remains subdued at around 2.0%. Employment growth for the six months to May was an annualised 1.6%, down from a high of 4.0% in 2017. Prudential controls and tighter bank lending practices, partly in response to the Royal Commission into Financial Services, have already underpinned a slowdown in household credit and house prices. The extent to which this will impact the housing market and the economy is not yet known, but lower auction clearance rates and house prices suggest the risks are to the downside. Household spending is likely to be constrained going forward, with savings rates already low, while consumer sentiment appears to be improving but is still relatively subdued. Business conditions remain buoyant, driven by the pickup in investment and non-dwelling construction, but consumer-facing industries continue to struggle.

The S&P/ASX 200 Accumulation Index rose 3.3% in June, led by the Energy (+7.8%) and IT (+6.3%) sectors. A late rally in oil prices saw oil refiner Caltex (+10.6%) gain, solidified by the announcement of a long-term wholesale food supply agreement with Woolworths (+7.2%). Machine learning tech provider Appen (+31.0%) saw the biggest price gain in June, surging 235.1% over the past 12 months, with investors seeing a potential wave of demand from global tech giants for artificial intelligence data. Over the past year to June, the ASX 200 has returned 13.0%, with Australia’s top 20 largest shares lagging with a return of 11.3%. Meanwhile, the S&P/ASX Small Ordinaries Index, the benchmark for small-cap shares, has returned a remarkable 24.3%, with themes such as technological disruption, Chinese demand, and the commodity rally driving valuations higher. Growth shares continued their winning streak through the first half of 2018 and are currently the main drivers of market returns, among them consumer staples shares like a2 Milk Co (+5.9% in June and +179.8% over 12 months), as well as big names like CSL (+3.6% in June and +39.5% over 12 months). 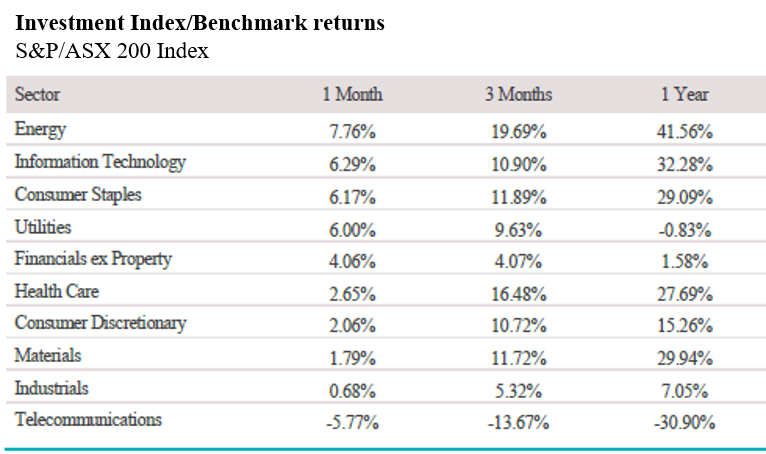 The S&P/ASX 200 A-REIT Accumulation Index rose 2.2% in June as modest falls in short-term yields lifted the sector during the month. Viva Energy REIT (+9.8%) was the top gainer, with parent company Viva Energy Group announcing its long-awaited IPO. Shopping centre leasing giant Scentre Group (+5.0%) continued to push higher, supported by favourable conditions in the retail market. High-yielding shares like National Storage REIT (+3.8%) also moved higher, providing an attractive income alternative to banks and telcos. Meanwhile, the prospect of falling house prices did nothing to help home and apartment builders Mirvac Group (-5.7%) and Stockland (-4.3%). Globally, developed market property rose 2.0% on a hedged basis in June. In the US, REITs enjoyed their fourth consecutive month of gains after suffering a sharp correction earlier in 2018. The Bloomberg US REIT Index rose 4.0%, led by shopping centres (+7.3%) and self-storage (+6.2%), while hotels (-2.8%) were down.

Australian bonds returned just under 0.5% in June, with Australian corporate debt returning 0.3% and government debt returning just over 0.5%, while long-term government bonds (with a maturity of ten years or more) returned 1.1%. Globally, the Bloomberg Barclays Global Aggregate Bond Index (AUD hedged) returned 0.2% as geopolitical tensions pushed yields lower. In the US, the flat shape of the yield curve continues to worry investors (a negative-sloping curve is historically a predictor of future recessions). The spread of 2-year over 10-year treasury yields converged to around 290 basis points during the month, threatening to invert for the first time since 2007. At the same time, the US Fed is gradually raising the funds rate while the government is bringing ever more short-term debt to the market to finance its tax reform package, which has helped to raise the shorter end of the yield curve. Germany’s safe-haven Bunds underwent further yield compression, with the 10-year yield falling from 0.34% to 0.30%, while the 5-year yield pushed further into negative territory, from -0.28% to -0.31%.

The information contained in this Market Update is current as at 12/07/2018 and is prepared by GWM Adviser Services Limited ABN 96 002 071749 trading as ThreeSixty Research, registered office 105-153 Miller Street North Sydney NSW 2060. This company is a member of the National group of companies.