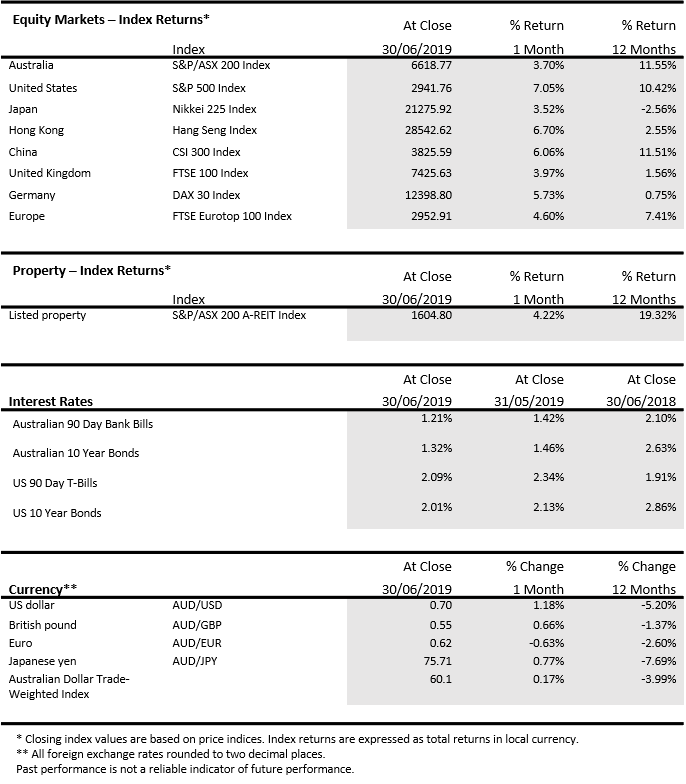 Recent economic data points to a deterioration in global economic growth, largely a result of softer US figures. Sentiment improved following a trade truce between the US and China, although it is yet to be seen how long markets will enjoy the reprieve. Central banks have shifted to an easing bias, and the RBA has already implemented two successive rate cuts in June and July.

The G20 summit in late June brought some peace to trade tensions as Xi and Trump agreed to restart talks, but the issue has clearly undermined confidence and expectations of a recovery in growth in the second half of 2019. The US has already placed tariffs on US$250 billion worth of Chinese products and has threatened tariffs on $325 billion more, while China in turn has set tariffs on $110 billion worth of US goods and is threatening additional measures that would affect US businesses in China. US inflation and wages growth readings have been subdued, with core CPI dropping back to 2.0%, the core PCE price index rising just 1.6%, and wages growth easing back to 3.1%. The ISM manufacturing index fell 0.4 points to 51.7 in June, with the new orders index down 2.7 points to a flat 50.0. For recession watchers, the fall in Recreational Vehicle (RV) shipments is an interesting if disturbing trend. Shipments fell a massive 14% in May and are down 22% year-on-year, signalling that consumers are avoiding big ticket purchases.  However, the good news was the surprise June payrolls data, which showed 224,000 jobs added over the month, with markets suspecting that May’s disappointing result may have been a one-off. As broadly expected, the Fed left the funds rate on hold at its June FOMC meeting, but hinted at rate cuts in the near future.

Inflation in the eurozone was 1.2% year-on-year in June, steady on May and down on April’s result of 1.7%. Core inflation rose from 0.8% to 1.1% but remains obdurately low. In France, modest growth in the service sector and stability in manufacturing growth foreshadow moderate GDP growth over the June quarter. In Germany the services sector continues to grow on the back of strong domestic demand, while manufacturing is contracting at the fastest pace since 2012, with sector employment falling the most in over six years. Germany’s Federal Labour Agency reported that the unemployment rate rose for the first time in five years from 4.9%—the lowest since reunification in 1990—to 5.0% in May, although unemployment across the eurozone continues on a steady downward path, falling from 7.6% to 7.5% in June. German exports fell 3.7% in April and imports fell 1.3%, with the trade war clearly weighing on growth. Annual growth in industrial production has deteriorated from a recent high of 7.3% at the end of 2017 to a contraction of 3.4% in April. ECB President Mario Draghi said the bank was ready to “use all the instruments that are in the toolbox” if the weakness of the manufacturing export sector spread to other parts of the economy. His successor, Christine Lagarde, takes over in October this year at a critical time for the bank.

The Chinese economy remains soft by historical standards and exposed to the escalating trade war and weaker global trade growth. Industrial activity is very subdued despite the range of stimulus measures undertaken over the past year. The official PMI, which had begun to move back into expansion in March (albeit barely at 50.5), slipped back to 49.4 in May and remained steady in June. The Caixin PMI fell in June from 50.2 to 49.4 and industrial production fell from 5.4% to 5.0%. One bright spot was the bounce in retail sales in May, with growth rising to 8.6% after a weak April, which saw growth fall to a 16-year low of 7.4%. The G20 Summit proved to be a pressure valve for the trade tensions that had rocked markets in May, with both leaders agreeing to return to the negotiating table. President Trump’s decision to ease restrictions on Chinese carrier Huawei may indicate a willingness to reach a deal, although the issue remains live for markets. Together with an economy already struggling to maintain momentum, the trade issue has prompted further stimulus from Chinese authorities, who say they will adjust financing rules to allow local authorities to step up infrastructure spending. The move goes against the policy of recent years aimed at reducing financial stability risks by reigning in the growth of credit used to finance inefficient infrastructure projects.

Japan’s March quarter GDP growth of an annualized 2.2% rate was promising and certainly higher than the market’s initial expectation of zero growth for the period. Compared to the initial flash estimate, capital spending was revised upwards but public investment and housing investment figures were revised down. Over the year to the end of the March quarter, GDP grew 0.9%, but with a declining population, GDP per head growth will be significantly higher. The better-than-expected GDP figure makes it more likely that the October tax rise from 8% to 10% will not be delayed. The tax rise is estimated by the IMF to result in fiscal tightening equivalent to around 0.7% of GDP, to be offset by a series of short- and long-term spending measures. The last time the sales tax was increased—from 5% to 8%—the economy fell into recession, and there are fears the new tax increase will have the same effect, especially as the economy is already vulnerable. In India, the government has presented its first budget following the re-election of Prime Minister Modi. The budget aims to get the country back to an 8.0% growth rate with an economy worth US$5 trillion by 2025 – almost double its size. The question is whether this can be achieved while meeting the fiscal deficit target, which was cut to 3.3% of GDP for the FY20 year.

The big news in Australia is the RBA’s switch to rate cutting mode, with two cuts to the cash rate over June and July to a record low 1.00%. The minutes of the June meeting point to concern about the US-China trade dispute, while domestically the decline in dwelling investment has had an impact on economic growth and households remain constrained by low wages growth and falls in home prices. In particular, the RBA noted there is still spare capacity in the labour market, with modelling suggesting that the rate of unemployment consistent with stable inflation (known as the NAIRU, or Non-Accelerating Inflation Rate of Unemployment) has fallen in recent years to around 4.5%. When the unemployment rate rose to 5.2% in April and held steady in May, the case for easing became clearer. The prospect of sub-1.0% cash rates has further undermined the Australian dollar and driven investors towards higher yielding financial assets. In what amounted to a further easing of monetary conditions and in recognition of the likelihood of a lower level of interest rates for longer, APRA signalled a change to the 7.0% serviceability buffer on home loans. Meanwhile, business conditions remain challenging. June’s NAB business survey revealed a 5-point drop in confidence, unwinding the 7-point spike in sentiment seen just after the May federal election.

Australian shares pushed higher through June on the back of improving sentiment around global trade and a rallying US market. The S&P/ASX 200 Index returned 3.7% over the month, finishing above 6,600 points and moving above 6,750 early in July, pushing closer to its 2007 record high. Gains were led by large cap shares, with miners capturing the spotlight. Materials (+6.4%) was the top gaining sector over June, driven by solid gains from majors Newcrest (+17.4%), Fortescue Metals (+12.1%) and BHP (+9.00%), while Galaxy Resources (-22.0%) remains plagued by a falling lithium price and short sellers. Industrials (+5.4%) had a positive month, with Sydney Airport (+8.5%) higher after announcing a rise in domestic passengers over June, and achieving a turnaround on international visitor numbers despite fears of a slowdown in Chinese passengers. Ship builder Austal (+16.4%) saw a solid boost after being inducted into the ASX 200. Within the Health Care sector (+4.2%), Nanosonics (+24.9%) was the standout in June, rising to an all-time high as investors were drawn to the company’s impressive half-year results and the growth potential for its disinfection technology.

Global shares rebounded in June as central banks prepared markets for potential rate cuts and trade tensions appeared to ease following the G20 summit in late June. Developed market shares, measured by the MSCI World Ex Australia Index, rose 5.4% in Australian dollar terms and emerging market shares rose 5.0%, helped by a softer US currency. The US S&P 500 Index rose 7.1% in June in US dollar terms, with large gains from the Materials (+11.5%) and Energy (+9.1%) sectors. Marathon Petroleum (+21.5%), now the largest refiner in North America after its acquisition of Andeavor, saw solid gains on the back of a rising oil market, helping to make up for disappointing margins in recent months. The Information Technology sector (+9.1%) made up ground following May’s poor performance, including a 13.1% gain from Apple, which has benefited from the trade truce. In Europe, the resources sector (+9.5%) was the top gainer among STOXX Europe 600 shares, while auto stocks (+6.7%) recovered from the trade woes of the previous month. Banks (+1.6%) were positive over June but still struggling as markets anticipate a fall in interest rates. Asian markets were higher in June as trade fears lifted (at least for now), with gains from Japan’s Nikkei 225 Index (+3.5%), Hong Kong’s Hang Seng (+6.7%) and China’s CSI 300 (+6.1%).

Australian listed property continued its winning streak in June, returning 4.2% as yields fell and the RBA’s rate cut spurred interest in income-generating assets, including listed property. Goodman Group (+12.2% in June and +56.2% over 12 months), the largest member of the ASX A-REIT Index, has ridden the logistics wave as Amazon’s landlord, continuing its rise through June although possibly reaching expensive territory with its yield currently around 1.6%. Charter Hall Group (+4.7%) and Abacus Property Group (+7.1%) are bidding as a consortium for the Australian Unity Office Fund, making a final offer of $3.04 per security compared to its price of $2.37 at the end of June, valuing the trust at around $496 million. Charter Hall Group was the top performer over the financial year (+66.1%) and is set to deliver solid full-year results after upgrading its earnings guidance. Dragging on the index were the shopping centre REITs, including Vicinity Centres (-5.0%) and Scentre Group (+1.1%), which remain affected by the soft retail environment. In the US, REITs were mostly flat through June in US dollar terms (+0.9%), with gains from Warehouse and Industrial (+6.9%), Shopping Centres (+1.3%) and Healthcare (+1.3%) sectors, with falls from Office Property (-2.3%) and Regional Malls (-2.2%).

With bond yields at record lows in many developed markets, the rally in bonds was given a further boost by the RBA, which cut rates to 1.00% at its July meeting. Australian bonds, measured by the AusBond Composite Index, returned 1.0% over June and has returned an impressive 9.6% over the past 12 months, rivalling returns on Australian shares. The yield on Australian 10-year Treasuries fell over June from 1.46% to 1.32%, and the 90-day Bill rate fell from 1.42% to 1.21%. The story is much the same globally: while the Fed is yet to cut rates, over the course of 2019 they have pivoted away from a tightening to an easing bias. Markets fully priced in a 50-basis point cut in the funds rate at its next meeting scheduled for the end of July, however this was pared back following June’s strong jobs result. Low rates have also sparked a renewed hunt for yield, which has been reflected in the high yield segment of the bond market. ECB President Mario Draghi defended the bank’s approach to combatting slowing growth, suggesting that his successor Christine Lagarde would have the option of cutting rates or deploying additional stimulus. European yields continued to fall through the month, with the German 10-year yield moving further into negative territory from -0.20% to -0.33%.