The future belongs to innovators, rulebreakers and strategic thinkers

The World Cup shows both ‘spenders’ and ‘savers’ can win 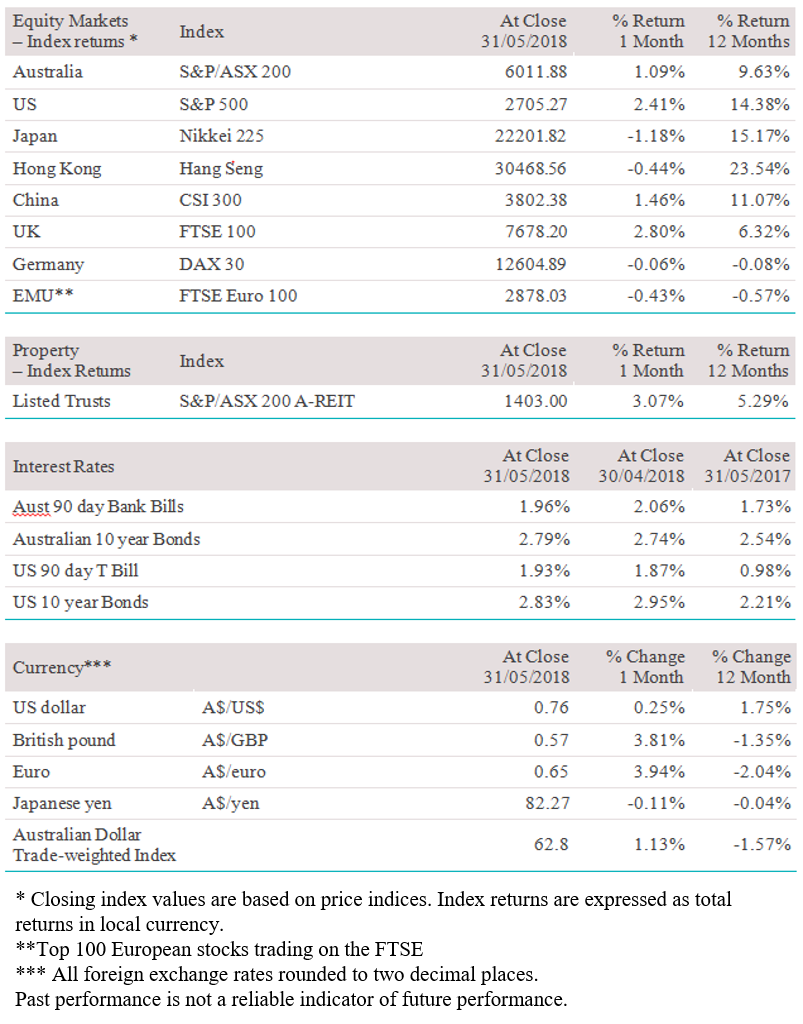 Geopolitical tensions, including an ‘on-again, off-again’ tariff war between the US, China and Europe were the cause of uncertainty for markets through May. The US and China agreed to a ‘trade war hold’ before tariff threats re-emerged once again from the US, culminating in June’s heated G7 meeting. Globally, inflation continues to inch higher, with renewed pressure on central banks to tighten rates, while data points to stronger economic growth for the June quarter.

US March quarter GDP was revised down 0.1 points to an annualised 2.2% according to May’s second estimate reading, missing against the expected reading of 2.3%. Despite the slower-than-expected growth, there are signs of a stronger June quarter, including improved consumer spending and business investment, while January’s income tax cuts are expected to start flowing through to the household and business sectors. On the trade front, the White House announced that it is determined to move ahead with tariffs on US $50 billion worth of Chinese goods, in what China’s Commerce Ministry described as a “violation of the consensus” reached between the two countries only days earlier. Meanwhile, across the Atlantic, the European Union is preparing for its own retaliatory tariffs against a list of key US exports. The core PCE index—the Federal Reserve’s preferred measure of inflation—eased from 1.9% to 1.8% in April, after jumping from 1.6% in March, while real consumer spending rose 0.4% in a sign that economic growth is regaining momentum. Non-farm payrolls rose by 223,000 in May, beating expected growth of 189,000. Job openings at the end of April hit a record high of 6.7 million, and revised data showed March was the first time since records began in 2000 that openings exceeded the number of unemployed.

Concerns over slowing world trade growth and rising geopolitical tensions, together with extreme weather conditions, have combined to undermine economic activity across the European continent. The spectre of a trade war with the US also places major European economies in an uncertain position, with Germany particularly vulnerable given its large trade surplus in manufactured goods, including automobiles. In positive news, euro area inflation made a surprise comeback in May, jumping from 1.2% to 1.9% and soundly beating the consensus rate of 1.6%. However, core inflation, which excludes volatile goods (energy, food, alcohol and tobacco), rose only 0.4 points to 1.1%. While the pace of Europe’s economic growth is moderating, there is no sign yet of a turning point. May data showed euro area GDP growth was 2.5% in the March quarter, down on December quarter growth of 2.8%, while wages growth remains promising, with German wages growing by 2.7% in the March quarter. In Italy, the political impasse was finally broken, with a coalition government formed between the two popular right parties, Lega Nord and the Five Star Movement. The new government has announced it will tackle Italy’s high levels of debt, but has ruled out an exit from the euro.

While China’s March quarter GDP growth was a promising 6.8% year-on-year, indicators of manufacturing output growth and business investment remain subdued. China’s official manufacturing PMI rose in May from 51.4 to 51.9, indicating a modest improvement in growth, however the unofficial Caixin PMI, which measures output from smaller firms, was steady at 51.1. A key focus for President Xi Jinping’s government is financial risk control. China’s courts have begun handing down harsh sentences for fraudulent financing practices, while a slowing in credit creation, especially within the shadow banking sector, has created a more restrictive lending environment. May data showed investment spending growth slowed to just 7.0% year-on-year in April—a far cry from the mid-20% range experienced through 2010-11—and infrastructure investment growth for the January to April period slowed 0.6 points to 12.4% year-on-year. Real estate investment has also softened, and property sales by floor area dropped 4.1% year-on-year to April. China’s exports have maintained solid growth in 2018 in line with broad strength among Asia’s big exporters, although this may be threatened by US tariffs, which would make Chinese goods more expensive in the country’s biggest export market.

June’s flash March quarter GDP reading confirmed that Japan’s longest run of economic expansion since the 1980s has come to an end, with output contracting -0.6%. The result is a serious blow to Prime Minister Abe’s reflationary policies (known as Abenomics) and the Bank of Japan’s ultra-easy monetary policy, although some economists point to the drop in the rate of quantitative easing over recent months. The Nikkei Japan PMIs show the manufacturing and service sectors continue to expand, but both indices recorded a slower rate of growth in May, reversing the previous month’s acceleration. In early June the Bank of India lifted its policy rate by 25 basis points to 6.25%, which is the first time it has tightened in over four years. The hike will add to public borrowing costs, while higher oil prices are putting pressure on the government to cut taxes on fuel products. India’s GDP growth recorded a stunning 7.7% for the March quarter, driven by improved consumer and investor sentiment, but inflation remains the key concern, with the core CPI rising from 5.1% to 5.7% in May.

The Reserve Bank of Australia (RBA) left the cash rate anchored at 1.5% at its June meeting, and judging by the most recent Statement on Monetary Policy, it is unlikely to change course any time soon. Ongoing low wages growth, uncertainty over the extent and impact of the recent tightening in home lending conditions, and inflation barely in the bottom of the RBA’s target range suggest that it would be premature to begin exiting current accommodative policy settings. However, the broader economic picture remains robust, with March quarter GDP recording annual growth of 3.1%, and labour and business conditions pointing to solid fundamentals. May data showed Australia’s labour market added 22,600 jobs in April, including 32,700 full-time jobs (with a total of 72,600 added since the start of 2018). The unemployment rate rose by 0.1 points to 5.6%, driven by more people looking for work and a rise in the participation rate, which in trend terms rose to a record high of 65.7%. Meanwhile, the NAB business conditions index rose six points in April to +21 index points—its equal highest level since the survey commenced in March 1997—while retail turnover lifted 0.4% in April, beating what were admittedly fairly low expectations.

The S&P/ASX 200 Accumulation Index rose 1.1% in May, with the biggest gains coming from the Health Care (+5.6%) and Consumer Discretionary (+5.1%) sectors. Australia’s leading biotechnology business CSL (+9.1%) advanced to its highest price since listing in 1994 after announcing its second profit upgrade in 2018, including better than expected sales. Seven West Media (+47.8%) jumped early in the month after acquiring the free-to-air broadcast rights from Cricket Australia, taking them off channels Nine and Ten. The Materials sector (+2.0%) was higher in line with a rise in base metal prices, with gains from major miners BHP Billiton (+6.0%) and Oz Minerals (+6.4%). Telecommunications (-10.2%) was the worst performing sector, with Telstra (-12.0%) hitting seven-year lows in the wake of multiple network outages during May and ongoing concerns about competition from the NBN. Australia’s large cap shares (measured by the S&P/ASX 50 Accumulation Index) rose 1.0% in May, compared to a 3.7% gain from its small cap peers. Over the past 12 months to the end of May, small caps have outperformed large caps by 17.9%, while large cap shares are lagging the ASX 200 Index over short and medium terms. 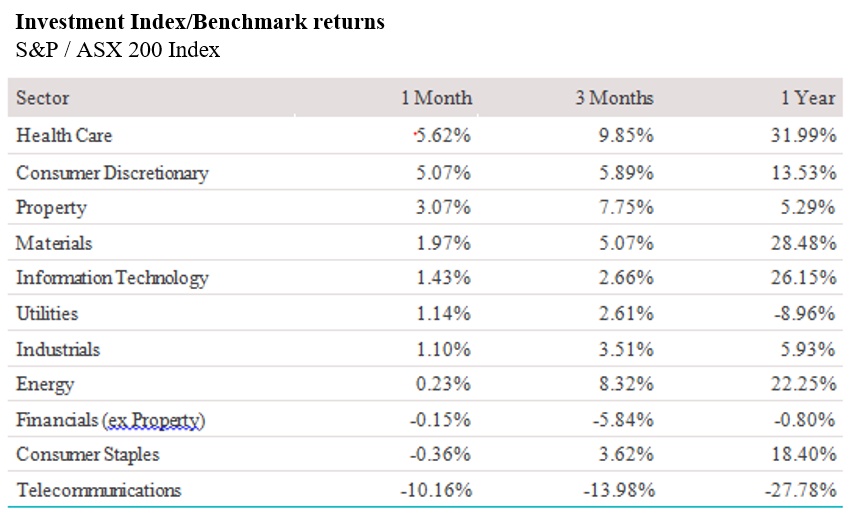 Global developed market shares, measured by the MSCI World Ex Australia Index, returned 0.5% through May in AUD terms, bolstered predominately by gains from the United States and United Kingdom. The US S&P 500 Index rose 2.4% in USD terms, with the Information Technology sector (+7.1%) the best performer, contributing 77% of the S&P 500’s gains in May. Facebook (+11.5%) bounced back despite continued fallout from the Cambridge Analytica scandal, while Apple (+13.1%) moved closer to becoming the first stock to reach a market capitalisation of US $1 trillion. In Europe, the STOXX Euro 600 Index rose a modest 0.5%, weighed down by Europe’s banks (-9.0%), including major falls from Italian banks like Unicredit (-21.4%), which were most impacted by uncertainty surrounding Italy’s election outcome and the possibility of an ‘Italexit’. In Asia, Japan’s Nikkei 225 Index fell -1.2%, Hong Kong’s Hang Seng fell -0.4%, and China’s CSI 300 Index gained 1.5%. Global emerging market shares, measured by the MSCI Emerging Markets Index, fell -3.8% in AUD terms, but have still outperformed developed market shares over the past 12 months.

The S&P/ASX 200 A-REIT Accumulation Index rose 3.1% in May as modest falls in short-term yields lifted the sector during the month. Almost all major A-REITs gained, led by Investa Office Fund (+15.0%), which received a $3.1 billion bid from US fund manager Blackstone. Shopping centres had another positive month, with gains from Vicinity Centres (+9.4%), which will sell $1 billion of ‘non-core’ sub-regional centres to focus on premium malls, and Scentre Group (+3.7%), which may be one of the beneficiaries of the sale of Westfield if former shareholders feel the need to reinvest their cash payout in shopping centre stocks. Diversified property managers Abacus (+6.1%) and GPT Group (+3.9%) also had a solid month. Globally, the FTSE EPRA/NAREIT Developed Ex Australia Index (AUD hedged) rose 2.2% in May. In the US, the REIT recovery gathered more steam in what was the best month for REITs so far in 2018. Mall REITs, which have suffered in recent quarters from tenant bankruptcies, continued their turnaround, returning 9.4% in May, while hotels returned 10.9% and health care facilities 7.4%.

Australian bonds returned 0.7% in May, with Australian government bonds returning 0.8% and longer-term government bonds (with a maturity of ten years or more) returning 1.3%. Globally, the Bloomberg Barclays Global Aggregate Bond Index (AUD hedged) returned 0.4% as geopolitical tensions pushed safe haven yields lower. After briefly moving into positive territory mid-month, Germany’s 5-year Bund yield ended May at -0.27% as the prospect of a eurosceptic coalition in Italy solidified. After hitting 3.1% earlier in the month, the US 10-year Treasury yield finished the month just above 2.8%, with the spread between 10-year and 2-year yields narrowing to 43 basis points. While the market is concerned about the flatness of the yield curve (a negatively sloping yield curve is correlated with recessions), there is some debate about whether central bank policies globally are creating a false signal. The Japanese 10-year yield fell from 0.06% to 0.04%, still hovering above the Bank of Japan’s zero yield target, which the Bank hinted could be scrapped even before inflation reaches the 2% target.

The Australian dollar rose 0.3% against the US dollar in May and 1.1% on a trade-weighted basis, helped by strengthening metals prices and a transitory cooling in US-China trade talks. The Australian dollar finished the month at USD 0.76, and made even stronger gains against the euro (+3.9% to end the month at EUR 0.65) and the British pound (+3.8% to end the month at GBP 0.57). With the Fed expected to lift rates to at least 2.75% over the coming 18 months (and Australian rates likely to remain steady), further downside in the AUD is to be expected.

The information contained in this Market Update is current as at 12/06/2018 and is prepared by GWM Adviser Services Limited ABN 96 002 071749 trading as ThreeSixty Research, registered office 105-153 Miller Street North Sydney NSW 2060. This company is a member of the National group of companies.