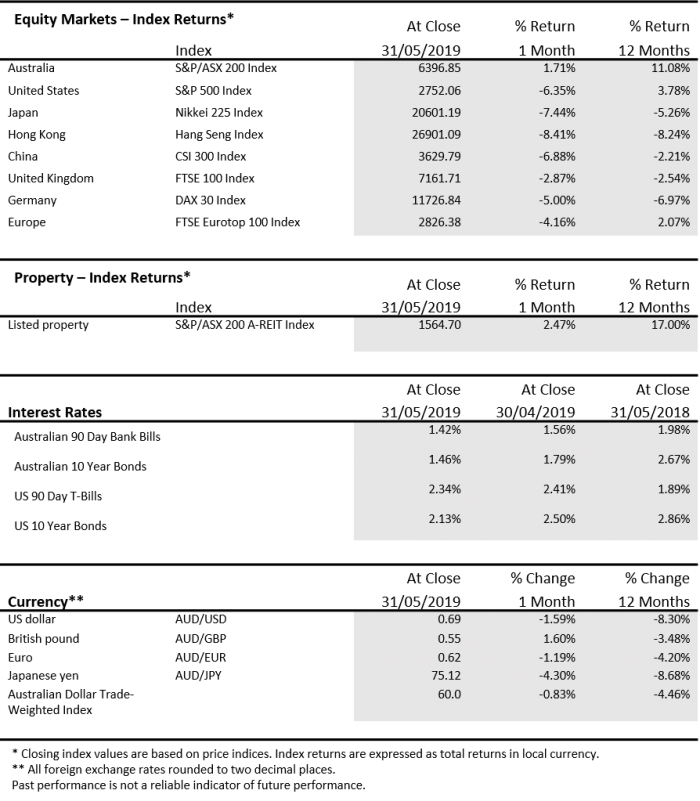 The breakdown in trade negotiations between the US and China has rattled markets, while the growing threat of protectionism has dampened the economic outlook. Central banks have dispensed with further tightening, but markets clearly see a case for easing given the current geopolitical risks, low inflation, and the fear of an economic downturn.

The US economy seems to have settled back towards a more sustainable growth path. The March quarter GDP result of 3.1% overstates the underlying position of the economy, but the Atlanta Fed’s GDPNow of just 1.2% growth for the June quarter likely understates the true picture. In any case, the US is on track to record its longest post-war economic expansion come June when it matches the 120-month expansion of the 1990s. Interestingly, the growth rate across this expansion has been just 2.3% per annum, well below that of previous expansions, including the 3.6% per annum rate recorded in the 1990s. Fed chairman Jerome Powell stated that some of the recent weakness in inflation data may be transitory, which is in contrast to the more dovish comments made since the equity market rout in December 2018, but markets see the trade war as a key factor in support of easing. Job creation stalled in May with non-farm payrolls rising only 75,000 compared to an unexpected gain of 185,000. The labour market remains relatively tight with the unemployment rate unchanged at a record low of 3.6%, while average hourly earnings were down one point to 3.1% year-on-year. The ISM Manufacturing Index came in below expectations at 52.1, down from 52.8 in the previous month.

Europe is battling low inflation and falls in manufacturing activity, with some small signs of improvement overshadowed by trade fears and a tense Europe-wide election. The eurozone grew 0.4% in the March quarter according to Eurostat’s flash estimate, following growth of 0.2% in the December quarter. The European Commission forecasts German GDP to grow by 0.5% through 2019, lower than the 1.4% expected for France and the 1.2% expected for the euro area. It has been suggested that a move to a more expansionary fiscal policy in the three major economies in the zone, together with a pickup in Chinese growth, could boost GDP growth a full percentage point by the end of 2019. However, sentiment remains weak, with the German IFO Institute’s business climate indicator falling from 99.2 to 97.9 in May, while yields on 10-year German Bunds fell from 0.01% to -0.20%, reflecting a deterioration in the outlook. Annual inflation in the eurozone picked up to 1.7% in April before slumping back to 1.2% in May, while core inflation is stuck at around 1.0%. The European election results revealed the extent of the political divide across the UK and the continent, with both the major centre right and social democrat groupings losing 87 seats, which flowed to euro-sceptic, liberal and green groupings.

Recent economic data has broadly undershot expectations, with the May manufacturing PMI slipping from 50.1 to 49.4 (lower than the expected 50.0) and April industrial production easing to 5.4% after spiking to 8.5% in March. Meanwhile retail sales for April slowed from 8.7% to 7.2% and investment spending also slowed slightly from 6.3% to 6.1%. The major news is the escalation in the trade war with the US, with the Trump administration accusing the Chinese of backing away from earlier agreed positions, creating a case for further hikes in duties from 10% to 25% on US $200 billion of Chinese imports, accompanied with the threat to extend tariffs to another US $300 billion of goods. China subsequently responded, saying it would levy duties on US $60 billion of goods. The Chinese economy appeared to be responding to stimulus measures put in place over the past year, with March quarter GDP growth of 6.4%, which was in line with the previous quarter and above expectations. However, recent data points to a weaker situation, raising concerns that current levels of stimulus may not be enough, especially if the trade dispute is not resolved. The authorities have one eye fixed on financial stability and one on achieving a minimum growth rate of around 6.0%.

The latest PMI data showed further weakness in Japan’s manufacturing economy, with output falling for the fifth consecutive month in May and both domestic and international demand declining. While the services economy proved resilient, with an expansion in new orders and employment, the headline index fell from 51.8 to 51.7. The Cabinet Office described the economy as “worsening” for the first time in over six years based on a fall in its key composite index of economic indicators. Industrial production rose 0.6% over April, rebounding from an adjusted -0.6% in March, while housing starts appear to be picking up sharply, rising to 12.8% over the year to March from 7.4% previously. April’s unemployment rate fell from 2.5% to 2.4% in April, but the jobs-to-applicants ratio appears to have flatlined at 1.63. Despite the labour market tightness, wages contracted by the sharpest rate since 2015, falling by 1.9% year-on-year in March. According to India’s official statistics, the economy expanded by just 5.8% over the past financial year, falling behind China’s pace for the first time in nearly two years. After being returned to office, Prime Minister Modi still faces an agrarian crisis, with calls for reform to the sector to allow farmers direct access to markets.

Market expectations for a cut in interest rates were satisfied in June as the RBA decided to lower the cash rate by 25 basis points to a record low 1.25%. The outlook remains broadly unchanged with the Australian economy expected to grow by 2.75% in both 2019 and 2020, but the RBA noted its intention is to provide additional support to the labour market and ensure that inflation expectations can be sustained. The move follows the very low inflation reading for the March quarter, which pointed to a significant downshift in growth over the second half of 2018, driven by falls in dwelling approvals and weakness in household spending, which has not been reflected in labour market indicators. While jobs growth has been robust, with a further 28,400 jobs added in April, a rise in the participation rate has seen the unemployment rate rise to 5.2%, up from 5.1% in March and 4.9% in February. The unemployment rate in NSW has risen from 3.9% to 4.5% in the space of four months, while in Victoria it has risen from a low of 4.2% in December to 4.9%. While these monthly readings can be volatile, the trend is difficult to ignore in the major eastern states. The Coalition was the upset winner in the federal election, and this appeared to unwind some pessimism in the housing market, although the Australian dollar came under renewed pressure as trade fears pushed the US dollar higher.

The S&P/ASX 200 Index returned 1.7% in May, with the price index rising above 6,500 points to end the month at just under 6,400 as global pressures, including the re-emerging US-China trade dispute, added to uncertainty over the month. Despite the weakness, Australian large cap shares held up well compared to global indices, with the top 50 stocks rising 2.6%. The top performing sectors in May were Communications (+7.3%), boosted by gains from Nine Entertainment (+18.9%), which is making inroads outside of broadcasting with its online streaming business Stan and online property portal Domain. Telstra (+8.0%) has benefited from the ACCC’s decision to block the TPG-Vodafone merger and has regained favour from the market after horrifying investors with a dividend cut in 2018. The Health Care sector (+3.3%) was led by Resmed (+11.3%) and Ramsay Health Care (+6.9%), while the Materials sector saw large gains from mid-tier miners and solid advances from the likes of Newcrest (+8.8%) and Rio Tinto (+5.2%), whose price hit an 11-year high on the ASX. Dragging on performance in May was the Consumer Staples sector (-4.2%), which continues to be impacted by soft retail sales and a struggling household sector. Agribusiness Costa Group (-30.3%) was hardest hit, affected by low-yielding raspberries and high water costs.

Global shares retreated in May as the re-emergence of trade fears and the adjustment of market expectations with respect to rate cuts dampened the outlook. Developed market shares, measured by the MSCI World Ex Australia Index, lost 4.3% in Australian dollar terms while emerging market shares fell 5.7%, buffeted by a rise in the US dollar. The US S&P 500 Index lost 6.4% in May, with falls from all sectors excluding property, including significant falls from the Energy (-11.7%) and Information Technology (-8.9%) sectors. IT saw large falls from equipment manufacturers such as Qualcomm (-22.4%), while Apple (-12.8%) and Facebook (-8.2%) were hit by the risk-off wave. Volatility crept back into play with the CBOE Volatility Index rising from April’s low of 12.0 points to a high of 20.6 in May. Europe was unable to avoid the pain, with the broad STOXX Europe 600 Index falling 5.3%. Auto sector shares (-13.7%) are still exposed to potential disruptive trade negotiations with the US and the integrated nature of the global value chain means almost no participant is left unscathed. Meanwhile the sharp fall in yields has put pressure on Europe’s major banks (-11.6%), forcing some to multi-year lows. Asian markets were also hit by trade fears, with falls in Japan’s Nikkei Index (-7.4%), China’s CSI 300 Index (-6.9%) and Hong Kong’s Hang Seng Index (-8.4%).

Australian listed property had a positive month in May, returning 2.5% as a drop in fixed income yields drove prices higher in what tends to be a rate-sensitive sector. Stockland (+17.5%) was the standout performer, boosted by the dissipation of some negative sentiment following the Coalition’s election win, which spelled the end for any changes to negative gearing. Mirvac Group (+7.1%) and Charter Hall Group (+5.4%)—both holders of residential developments—also gained, with Mirvac also luring investors with a 5% lift in its FY19 dividend. Shopping centres continue to struggle in the face of softer retail activity and a cautious household sector, with Shopping Centres Australasia (-1.2%) and Scentre Group (-0.5%) down in May. While Labor’s negative gearing proposals were thought to favour developers by limiting tax concessions to new stock, the improvement in sentiment has so far had a greater impact on the sector. Globally, developed market REITs fell 0.3% in Australian dollar hedged terms. In the US, REITs were flat in May in US dollar terms, with gains from Public and Self-Storage (+5.9%), Healthcare (+5.1%) and Manufactured Homes (+3.2%) and falls from Regional Malls (-7.1%), Hotels (-6.9%) and Warehouse and Industrial (-2.7%) REITs.

The bond market is still expecting the Fed to ease policy through to 2020, while the US administration is showing it is prepared to keep the trade dispute with China running, and possibly even attempt to renegotiate deals with Mexico and Europe. While recent Fed comments suggest an extended period of steady rates, markets clearly see a rolling trade dispute as a key factor in favour of additional monetary support. In Europe, yields have fallen steeply, reflecting a deterioration in the economic outlook. The ECB made no changes to its key rates in June, but President Mario Draghi stated it is “determined to act in case of adverse contingencies.” The German 10-year Bund yield hit record lows, falling from 0.01% to -0.20% in May, signifying declining confidence in the growth outlook. French yields moved from 0.37% to 0.21% and UK yields dropped 30 basis points from 1.18% to 0.89%. The fall in yields led to positive performance from bond indices, with the Bloomberg Barclays Global Aggregate Index (AUD Hedged) returning 1.4%. Markets remain spooked by the inverted US yield curve, which is a potential indicator of recession, with the spread of 10-year over 2-year Treasury yields narrowing in May from 24 to 19 basis points.

The Australian dollar appeared to benefit from a surprise Coalition election victory with some unwinding of pessimism around the housing market, but a rising US dollar and expectations of an RBA rate cut pulled the currency in the other direction. The Australian dollar fell 0.8% in trade-weighted terms in May, depreciating against the US dollar (-1.6% to 0.69), euro (-1.2% to 0.62) and Japanese yen (-4.3% to 75.12), and rising against the British pound (+1.6% to 0.55).