March of the Commodities

Commodity prices have been trending higher since the middle of 2020, driven largely by the improvement in global growth post Covid lockdowns. However, since the Russian invasion of Ukraine, price rises have become extreme (see below). In this month’s Market Update, we explore the drivers of commodity prices and what higher prices mean for central banks, the economy and markets. 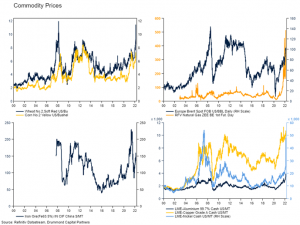 Why are commodity prices rising?

The most recent spikes in energy, nickel and food prices can, for the most part, be explained by Russia’s invasion of Ukraine. Existing sanctions and the expectation of more to come will either prevent or make it more difficult for Russia to sell many of its commodities to the world’s major economies (except China, an important exception). Though Russia is a very small economy (only slightly larger than Australia,) it produces a considerable portion of global oil and gas as well as other precious metals, wheat and fertilizer. Importantly, Europe sources 40% of its natural gas from Russia (see below). Ukraine is also an important commodity producer, growing a similar amount of wheat as Australia, and producing about 50% of the world’s supply of neon gas, which is used in semiconductor production among other things. 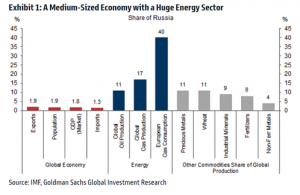 However, commodity prices have been generally rising since early 2020 – so there must be more to the story. Global production growth for major agricultural commodities has been trending lower for the last few years and stocks have plateaued. This has likely supported some of the growth in food prices. However, of more importance for food prices has been the rise in global energy prices (see below). There is a very strong relationship between the cost of food and the cost of energy. Natural gas is a key ingredient in the process used to make nitrogen-based fertilizers used on a range of crops, including corn and wheat. Oil is obviously used in the production and transportation of food. 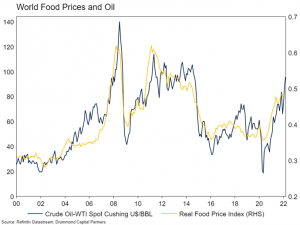 So, the solution for higher food prices may be lower energy prices. Unfortunately, lower energy prices may be hard to achieve. In the short term, prices will likely remain elevated due to Russian aggression. It seems likely that once supply chains are re-orientated, many European countries will ban the importation of Russian oil and gas. This is necessary for their own energy security as well as being appropriate punishment for Russia.

However, energy prices were rising before Russia was lining up troops on the Ukrainian border. We suggest part of the reason for higher prices is broad based under investment in the energy sector since around 2015, driven by two main factors:

The consequence of the above is that the world has been building insufficient energy infrastructure since the middle of the last decade and now there isn’t enough energy. A shortage of energy has led to rising prices. The Russian invasion was just the icing on the cake. It is almost certainly necessary for the world to reduce carbon emissions. However, to think that this can be achieved at a modest cost is a fantasy. The coming decades will likely be punctuated with revolving energy “crises” while technology and investment in low carbon alternatives catches up.

What is the economic and market impact?

There are far more commodity consumers than producers in the world, so the net effect of the above is negative. Higher commodity prices can also have flow on effects. Higher petrol and bread prices in rich countries can see politicians ousted and less household spending on discretionary items. In poorer countries, higher bread and fuel prices can literally mean the difference between life and death and lead to protests and violent regime change.

Oil prices adjusted for inflation are around the levels that are normally associated with a reduction in demand in the USA. How this reduction in demand plays out is highly uncertain. Some energy price shocks have been associated with recessions. However, we don’t think that is the most likely outcome at this point. Households and businesses are much more resilient to higher oil prices than they were in the 1980s and 1990s. That said, higher commodity prices will drag on economic growth in the year ahead.

The market impact of high commodity prices should also be net negative. Lower economic growth will reduce revenue growth and that combined with lower margins weakens the outlook for earnings. Higher commodity prices will also drive interest rates higher reducing the price of both bonds and equities.

Last month we wrote “In a high inflation, slowing growth and rising rate environment, we expect most assets will at times struggle to generate returns.” Since then, the outlook for both inflation and growth has deteriorated. As a result, equity markets have also fallen further despite some easing in rate hike expectations. What matters from a tactical perspective is how much of this bearish outlook is currently in market pricing. Our composite measure of market sentiment is close to levels seen in 2018 and 2020, suggesting much of the expected weakness is priced. 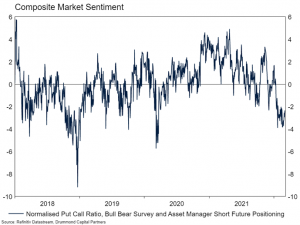 Overall market valuations have also improved significantly in the past 18 months, reflecting strong earnings growth as well as the current correction. 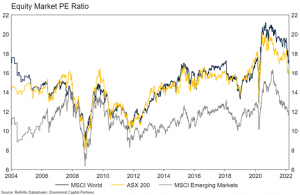 With the current narrative most likely priced, we think market outcomes in the year ahead will be highly dependent on how persistent inflation is and how central banks respond. The recent rise in commodity prices pushes back any potential moderation in food and energy inflation to much later in the year. The current Covid outbreak in China (which is still aiming to eliminate the virus) may also lead to wide-scale lockdowns, which will also boost goods inflation if manufacturing activity is curbed.

Thus, attention should quickly pivot back to Fed tightening and the impact that will have on growth. We think this limits any material upside on equity market performance, even in the event of a resolution to the Russia/Ukraine war. That said, markets are a good way off previous highs and there are potential returns to be made between current levels and material upside. Equities should also outperform bonds and cash in the year ahead.

The portfolios remain light equity exposure for now, but neutral overall growth. The quality of the portfolios’ equity exposure has been improved. Specifically, we have reduced small cap exposure and increased exposure to the Australian market (from global), which is a better hedge against rising commodity prices and is generally more defensive.