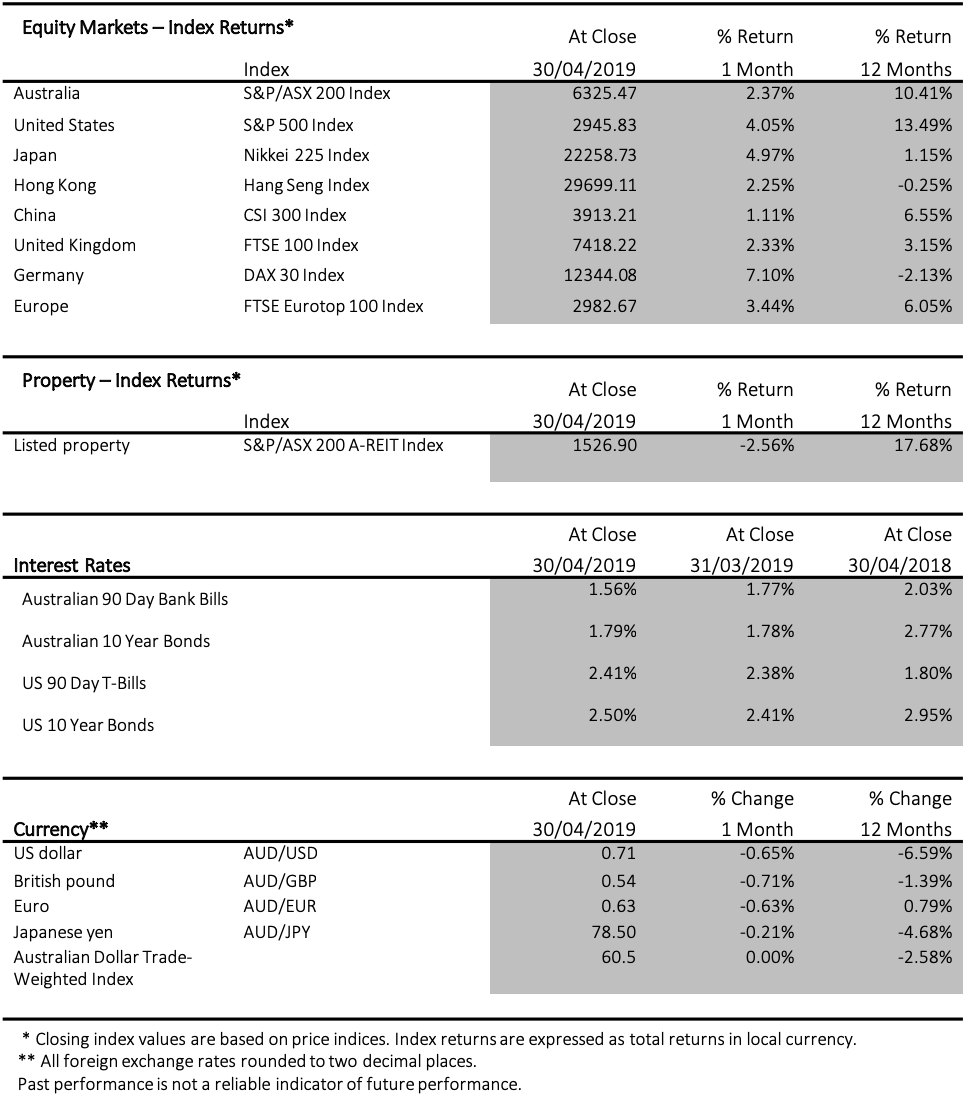 The global growth outlook is weakening, although with central banks putting rates on hold there is a chance the current economic expansion may experience an extended late cycle phase. China’s economy is being supported by stimulus measures, while easing trade tensions between the US and China have improved market sentiment, although this may change with the resumption of talks in May.

With the Fed now on hold and growth slowing back to a more sustainable pace there is an increased likelihood that this expansion can continue. The current economic expansion is now 118 months old and will reach the post-war record of 120 months mid-year. The absence of productivity growth in excess of 2.0% will place more pressure on wages growth, potentially pressuring the Fed to further delay tightening. While there is no sign of inflation at present, the labour market appears tight, with unemployment at 3.6% following April’s rise in non-farm payrolls of 263,000. However, underemployment is still around 7.3% and the participation rate has the potential to rise from current low levels and provide a further source of labour. The Fed is concerned about the risk of falling into a spiral of permanently low inflation expectations (like Japan), making it increasingly difficult to operate a flexible monetary policy. April’s ISM Manufacturing PMI missed expectations, falling from 55.0 to 52.8, while the non-Manufacturing PMI fell from 57.2 to 55.5. Retail sales rose 1.6% in March, bringing the year-on-year result to 3.6%, but still a far cry from the 6.0%-plus growth rate in mid-2018 when tax cuts were flowing through the economy.

The IHS Markit Eurozone Composite PMI suggests modest GDP growth of around 0.2% for the March quarter, but the manufacturing sector continues to contract, with conditions in Germany deteriorating the most. If there was any good news from April’s data it came from Greece’s manufacturing economy, which enjoyed its strongest improvement in nearly 19 years. The yield on German 10-year bonds fell below zero for the first time since 2016 as economic data pointed to evidence of a eurozone slowdown and global central banks adopted a more dovish stance. The IFO Business Climate Index showed a further fading of sentiment, with results especially dire in the manufacturing and trade sectors. The ECB’s Lending Survey showed that the percentage of banks reporting an increase in demand for loans to businesses in the previous quarter fell to zero, down from 9.0% at the end of 2018. Price growth remains weak: headline CPI in the eurozone fell to 1.4% over the year to March from 1.5% in the previous month, and core inflation fell to 0.8% from 1.0%. Brexit was scheduled for 29 March but has since been postponed to 31 October as Prime Minister May attempts to build a bipartisan deal that can meet the approval of the British parliament and EU negotiators. An interesting complication arises with the UK obligated to participate in the elections for the EU parliament on 23 May.

The Chinese economy seems to be responding to the stimulus put in place over the past 12 months. The first quarter GDP growth rate recorded 6.4%, in line with the previous quarter and beating expectations in the process. April PMI figures showed the manufacturing industry holding above the critical 50 level. The services sector remains solid, while March industrial production data comfortably beat projections with growth of 8.5% year-on-year, which is the fastest pace in more than four years. Retail sales jumped to 8.7% from 8.2%, while fixed investment spending growth at 6.3% represents a solid improvement on last year’s performance. Growth in new loans and a lift in bond issuance to support infrastructure spending have been the drivers of growth, while other shadow banking activities have continued to dwindle. The real estate investment and housing construction data have been mixed. Real estate investment picked up to 11.8% year-on-year in the March quarter, from 9.5% for 2018, while construction starts are up an estimated 18% year-on-year. Investment spending overall seems to have stabilised after declining through 2018, with growth lifting to 6.3% from a low of 5.3% year-on-year in August 2018.

The Nikkei Composite Output Index fell to a 30-month low in March as solid growth in the services sector was offset by manufacturing’s worst quarter since June 2016. Services saw good domestic demand but disappointing overseas orders. Manufacturing has faced weakness in domestic demand, while overseas demand has suffered from weakness in Europe and China. Japanese exports fell 2.4% over the year to March, with exports to China falling 9.4% while exports to the US grew 4.4%. The Bank of Japan’s quarterly Tankan survey for large manufacturers fell sharply to its lowest level in two years, while the survey of consumer sentiment slumped to its lowest level since 2016, with 24% of respondents believing economic conditions are getting worse and only 5% believing they are getting better. In positive news, core inflation in the Tokyo region appears to be on a gentle upward trend, rising from 1.1% to 1.3% in April. India’s economic figures have come under further scrutiny as the National Sample Survey Office (NSSO) reported gaps in the data used to calculate GDP. The report is bad timing for Prime Minister Modi who is currently campaigning for re-election. Inflation picked up from 2.6% to 2.9% year-on-year in March but remains below the Bank of India’s 4.0% target.

The Australian economy enters an election campaign in a relatively vulnerable position, with growth slowing, household debt levels high and considerable uncertainty regarding the outlook for housing and, in turn, consumer spending. Not everything is negative, as evidenced by the low unemployment rate, strong exports, and improving business investment. Despite zero growth in the CPI for the March quarter, the RBA opted to hold the cash rate at 1.50%, possibly preferring to remain on the sidelines during the election campaign. Housing finance is down almost 20% over the year, dwelling approvals are consistent with a 10–15% decline in residential construction over the next one to two years, and in Melbourne and Sydney prices are down 11–13% from peak levels. The household debt-to-income ratio sits at a record 1.9 times, although with mortgage rates low, the debt service ratio appears manageable for now at 9.1%, still well below the 13% level reached in 2008. In any case, hours worked have grown more than 2.0% over the year and combined with wages growth of around 2.3% suggests growth in household income of more than 4.0% in nominal terms. While not strong by historical standards, it is slightly above the average of the past five years.

The S&P/ASX 200 Index returned 2.4% in April, rising above 6,300 points, but appeared to find some resistance in early May as it attempted to push past its previous August 2018 high. Performance was led by the Consumer Staples sector (+7.4%), with gains from A2 Milk Co (+17.2%), whose third quarter update revealed further gains in Chinese market share, and Bega Cheese (+10.7%), which won a dispute with Kraft Heinz over packaging design. The Information Technology sector (+7.3%) also extended its gains and remains the fastest growing sector over the past 12 months (+32.9%). Consumer Discretionary (+5.0%) had a positive April with retail sales generally holding up well despite the pressures constraining household spending. Weaker results came from the Materials sector (-2.1%), with lithium producers Galaxy Resources (-22.3%) and Pilbara Minerals (-22.8%) plagued by short sellers and a fall in the price of battery-grade lithium in China. In price terms Australian equities are fully recovered from the December quarter downturn but the outlook remains uncertain. The slowdown in the housing market is expected to continue in the near term and remain a source of headwinds for Australian equities, while the impact will be felt most in the Financials sector where margin pressures are expected to prevail as credit growth remains subdued.

Global shares extended their gains over April with the MSCI World Ex-Australia Index rising 4.3%, led by the ongoing recovery in developed market equities. Improving investor sentiment has led to renewed interest in emerging markets, although the benchmark is still suffering from large falls through 2018 and has been essentially flat in Australian dollar terms over the 12 months to April 2019, while the developed market index has returned 14.1%. In the US, the S&P 500 Index gained 4.1%, with the Information Technology sector (+6.4%) continuing to build, including the ‘FAANG’ cohort. However, while the return of risk appetite has contributed to their recent strong performance, the FAANGs have been unable to make up for earlier losses and each are dealing with their own idiosyncratic risks. European shares, measured by the broad STOXX Europe 600 Index, returned 3.7% in euro terms in April, led by a bounce back from the automotive industry and solid gains from technology and financial services shares. After seriously considering a merger, Deutsche Bank (+1.5%) and Commerzbank (+16.1%) broke off discussions, deciding that it would not create sufficient value. With valuations looking increasingly stretched and lingering concerns prevailing, global equities are expected to remain volatile in the near term.

Australian listed property had a weak April, returning -2.6% and suffering from a general rise in yields. After strong performance across all sectors in March, retail was the major drag in April. With retail assets representing almost 46% of the S&P/ASX 300 A-REIT Index, the underperformance of this sector is more pronounced. With retail sales growth currently around 3.0% per annum—well below peak years over the last decade of over 5.6% and the average 3.6%—this is translating into weaker rental growth and higher capital expenditure to improve patronage at shopping centres. Retail landlord Scentre Group (-7.1%) reported moderate in-store sales growth, with major department stores and cinemas down over the March quarter, while Vicinity Centres (-2.3%) was down in April after announcing lower than expected growth in funds from operations over the six months to December as well as the resignation of its chairman. Globally, developed market REITs fell 1.0% in Australian dollar hedged terms. In the US, REITs also came under pressure, returning -0.3% in US dollar terms, with gains from Warehouse/Industrial REITs (+4.2%) and Manufactured Homes (+2.9%), and losses from Regional Malls (-5.3%), Healthcare (-4.7%) and Single Tenant (-3.1%) sectors.

The RBA has maintained its cautious stance on monetary policy, holding the cash rate steady at 1.50% at its May meeting despite the expectation of a cut following a weak inflation reading for the March quarter. However, while the RBA acknowledges that the household sector is struggling, it still expects disposable income to lift on the back of a robust labour market. The recent inversion of the US yield curve has raised the spectre of a possible recession. While investors debate the timing and severity of any future recession, at the very least markets expect that the Fed is more likely to cut rates rather than hike again in the short term. Globally, emerging markets remain attractive to many bond managers given the lure of attractive yields, although many still expect volatility to remain a challenge, particularly for those markets exposed to the strengthening US dollar. The US 10-year Treasury yield rose from 2.41% to 2.50% over April, while the spread between 10-year and 2-year yields expanded from a low of 13 to 24 basis points. The Australian 10-year yield was flat over the month, ending at 1.79%. The downward pressure in yields led to positive returns for fixed income in April, with Australian bonds returning 0.3% and global bonds flat in Australian dollar hedged terms.

The Australian dollar continues to tread water and is likely to trade in a fairly tight range over the next few months as markets wait for the RBA to make a clear decision on the direction of interest rates. Meanwhile the dollar is being buffeted by conflicting signals: low and declining domestic interest rates and spreads point to downside in the currency, while an improving Chinese economy and higher commodity prices point to upside. The Australian dollar was flat in trade-weighted terms in April, softening only slightly against major currencies including the US dollar (-0.7%), British pound (-0.7%), euro (-0.6%) and Japanese yen (-0.2%).