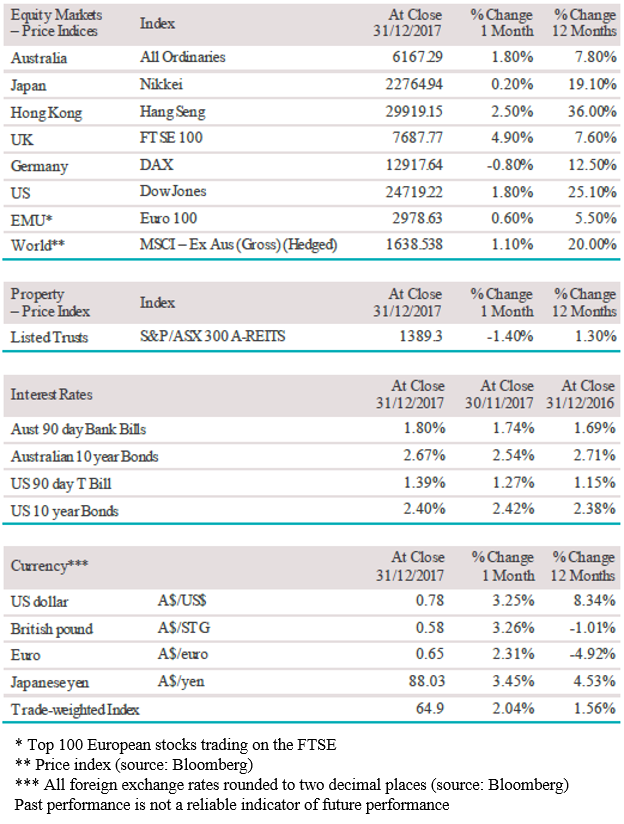 In the United States, the final estimate of Q3 GDP indicated real growth of 3.2%, which is slightly lower than the second estimate reading of 3.3% but still growing at its fastest pace in more than two years. Growth in consumer spending, which accounts for more than two thirds of the economy, was revised down 0.1 points to 2.2%. As was strongly anticipated by the market, the Fed lifted the funds rate at its December meeting by 25 basis points to a target range of 1.25–1.50%. The latest ‘dot plot’ shows that the Fed continues to expect to lift rates a further three times in 2018, to 2.25% and to 2.70% by end-2019. CPI figures for November showed the core PCE index – the Fed’s preferred measure – move slightly higher from 1.4% to 1.5% year on year, however it remains below the headline rate of inflation and stubbornly at odds with overall growth and employment conditions. Manufacturing saw further growth in December, with the PMI rising from 58.2 to 59.7, with most sub-indices moving into expansion, while non-farm payrolls recorded a reasonable jobs gain of 148,000, but well below the expected 190,000.

Growth across the 19 eurozone countries has improved steadily over the past year, and the recovery has also become more broad-based, both across different countries and sectors. In December, the European Central Bank made a significant upgrade to its 2018 growth forecast for the euro area, lifting its expected annual growth rate from 1.8% to 2.3%, while the outlook for inflation also moved higher from 1.2% to 1.4%. After a number of false starts, the Brexit negotiations between the EU and the UK have entered the second and decisive phase – by October 2018, both sides aim to have a divorce agreement in place, including an outline of future trade relations. Amid the summits and party conferences, Prime Minister May will need to navigate the pro- and anti-Brexit factions, as well as the Democratic Unionist Party (DUP), which is propping up her government.

Recent Chinese data indicates a slight loss of momentum in recent months. Although China’s official PMI picked up to 51.8 from 51.6, the Caixin PMI dropped to its lowest level in five months. Measures of industrial production and investment also appear to have softened, while policy tightening has focussed on the property sector. Sales by value and by floor space are now declining at a rate unmatched since early 2015, and construction activity and prices are also easing. China’s CPI was lower in November, posting 1.7% year on year, down from 1.9% in October and below the expected 1.8%. The challenge for the Chinese authorities is slowing the growth in credit without severely puncturing the economy, and to date they have been successful.

In Japan, Q3 GDP growth was revised up to an annualised 2.5% from a preliminary estimate of 1.4%, and just shy of the 2.6% recorded in Q2. The main drivers of growth were corporate investment and net exports, offset by a contraction in domestic consumption. Inflation is estimated at 0.7% for fiscal year 2017, and 1.1% for 2018. Consumer prices are still lagging in an economy that appears to be growing at a steady pace, thwarting the Bank of Japan’s attempts to achieve its 2% inflation target. The EU and Japan have finalised their free trade deal, creating the world’s largest open economic zone with over 600 million people and accounting for 30% of global GDP. The deal cuts tariffs, introduces cooperation on standards and regulations, and opens up public procurement markets.

While there was no monetary policy meeting of the RBA in January, December’s minutes revealed the board’s continued ambivalence towards domestic conditions. Wages remain stable at a low rate, despite the 3.3% increase in awards and minimum wages in the September quarter, and this appears to have impacted household spending. On the flip side, non-mining business investment has continued to rise, especially in the services sector, and labour market conditions continue to improve, with additional growth in employment – including full-time positions – through November. In a surprise turnaround, consumer sentiment rose 3.6% in December, reflecting consumers’ growing satisfaction with local conditions, but no doubt helped by the RBA’s ‘wait and see’ approach on interest rates.

The S&P/ASX 200 Accumulation Index rose 1.8% in December, with the energy and materials sectors rallying in the final month of 2017, outperforming the index by 4.6% and 4.4% respectively. Driving the energy index was Beach Energy (+18.6%), which expanded its interests in offshore gas fields, along with Whitehaven Coal (+15.8%), as coal prices held their gains through December. Within the materials sector, gold producer St Barbara (+19.4%) topped the leaderboard, announcing record-low production costs and boosted by a higher gold price. BlueScope Steel (+12.9%) was another big gainer, trading higher after announcing a profit upgrade and benefiting from the US corporate tax cuts.

The telecommunications sector (+5.5%) had a positive month in December, led by TPG (+10.4%), which managed to recoup some of its losses through the year, and gains from Telstra (+5.8%), in the wake of a horror year for investors. Consumer discretionary shares (+3.9%) enjoyed a solid month, with gains from Ardent Leisure (+17.1%), which divested the last of its non-core assets in December, and Tabcorp Holdings (+15.1%), with shareholders voting to approve the long-anticipated merger with Tatts Group. Utilities (-4.5%) took a hit, in part affected by a rise in domestic bond yields, with APA Group (-8.6%) and Spark Infrastructure (-3.8%) the worst performers for the month. 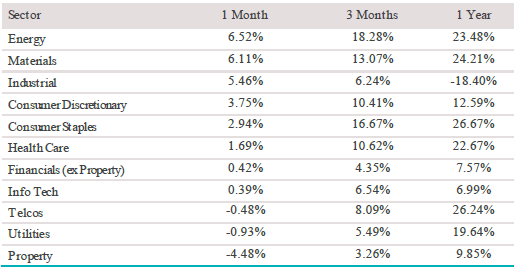 The MSCI World ex-Australia Index returned 1.1% in December in local currency terms but was flat in Australian dollar terms. The US S&P 500 Index rose 1.0% in US dollar terms, pushing to record highs through the month, but was down 2.2% in Australian dollar terms, with modest gains from the telecommunications and energy sectors. In Europe, the broad STOXX Euro 600 Index rose 0.6%, driven predominately by resources sector shares including Glencore (+14.8%) and Anglo American (+14.0%). In Asia, the Chinese CSI 300 Index rose 0.6%, Japan’s Nikkei 225 Index gained a modest 0.2%, and Hong Kong’s Hang Seng added 2.5%. South Korea’s KOSPI fell 0.4% but has managed to hold firm in the face of a stressful few months on the peninsula.

The S&P/ASX 300 A-REIT Accumulation Index (which includes distributions) returned 0.12% in December. Westfield gained 13.3% as the Lowy family accepted a $32 billion takeover offer from European giant Unibail-Rodamco. Other gainers through December included Viva Energy (+3.7%) and Hotel Property Investments (+3.5%), while Arena REIT was the worst performer (-8.3%). Over the past year, property securities have returned 6.4%, including distributions, underperforming international property securities, which have returned 8.2%. However, A-REITs are still outperforming currency-hedged global REITs over three, five and seven years.

Globally, the Bloomberg Barclays Global Aggregate Bond Index (A$ hedged) returned 0.24%, with yields in major developed markets flat or expanding. Japanese 10-year bond yields rose from 0.03% to 0.04%, still close to the Bank of Japan’s zero yield target. The German 10-year yield rose from 0.37% to 0.42%, while 5-year yields rose from -0.31% to -0.21% and appear to be slowly moving back towards positive territory. The UK was the exception to rising yields in December, with the 10-year Gilt yield falling from 1.33% to 1.19% as uncertainty around Brexit negotiations and trade with the EU set in.

The information contained in this Market Update is current as at 31/12/2017 and is prepared by GWM Adviser Services Limited ABN 96 002 071749 trading as ThreeSixty Research, registered office 105-153 Miller Street North Sydney NSW 2060. This company is a member of the National group of companies.