Why your 50s are a critical decade for fitness and finances

A billionaire’s explanation of how the economic machine works 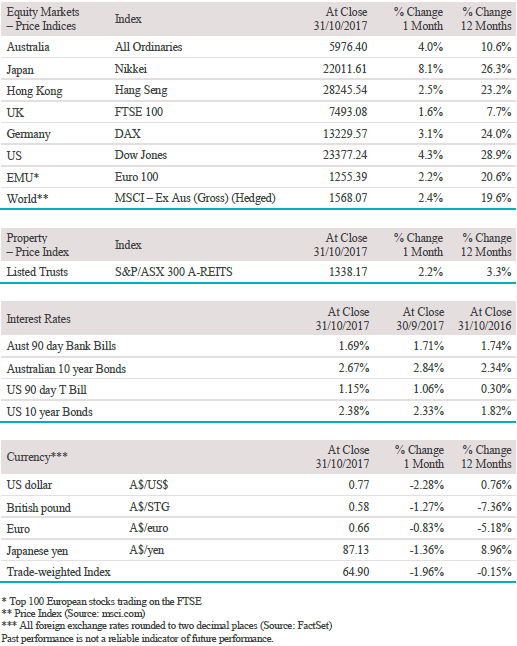 Despite another busy month in both a political and non-political sense, there was little out there to rattle equity markets during October.  While the turmoil in Spain regarding the independence of Catalonia, and the announcement of charges being filed against three former Trump campaign personnel, caused market jitters, the broad theme of synchronised global economic growth and strong corporate earnings has continued.

In the United States, unemployment and underemployment have both fallen to new cyclical lows of 4.1% and 7.9% respectively, however, wages growth and inflation are still both subdued.  October’s ISM non-manufacturing index rose to its highest since the index began in 2005 and the ISM manufacturing survey also remains at healthy levels with both indices suggesting that fourth quarter growth could be relatively solid.  The announcement that Jerome “Jay” Powell will replace Janet Yellen as the next Chair of the Federal Reserve Board of Governors is likely to mean that the process of normalising interest rates is likely to continue over the next few years.  Plans by House Republicans to cut corporate and personal taxes were largely in line with expectations but whether these plans can become law remain uncertain given the impact on the housing sector, small business and other interest groups.

In the Eurozone, the initial estimate of annual GDP growth in the September quarter was better than expected, rising to 2.5% (from 2.3% in the June quarter) which is now the best growth rate since 2011.  At its October meeting, the European Central Bank announced that it would halve the size of its bond buying program to €30 billion per month from January 2018.  However, with inflation still well below target at 1.4% per annum, the post-meeting statement from Mario Draghi was relatively dovish suggesting that interest rates will be on hold until at least 2019 and bond-buying could be extended beyond the September 2018 scheduled end-date.

In China, the official PMIs for October suggest that the economy has slowed a little in recent months.  In the detail, PMIs for medium and small sized manufacturing firms are now both in contraction territory.  The 19th Communist Party Congress went smoothly for President Xi cementing his power for the next five years and providing a mandate to more aggressively pursue economic reform.  This is overdue, given China has been reliant on debt-fuelled growth since the financial crisis with corporate debt to GDP near 160%, up from around 100% ten years ago.  However, deep Chinese reform also brings risks of a potential slowdown in 2018.

In Japan, Shinzo Abe’s gamble to hold an early election last month paid off and the ruling Liberal Democrat Party retained its two-thirds majority of the lower house, effectively locking them in power until 2021. For investors, the win secures the future of Abenomics, and in particular the aggressive easing of monetary policy.

In Australia, October saw another strong employment report with unemployment falling from 5.6% to 5.5% and business conditions remaining at strong levels.  However, September quarter inflation was lower than expected falling from 1.9% to 1.8% year-on-year.  Retail sales have also been subdued with sales flat in September after falling in both July and August as consumers battle with low wages growth and higher utility bills. 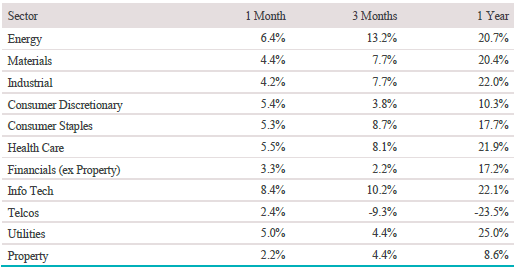 The MSCI World ex-Australia Index (in local currency terms) returned 2.5% in October, however, a decline in the Australian Dollar meant the index rose 4.3% in Australian Dollar terms.  Technology and materials finished as the top-performing sectors during a month in which corporate earnings largely beat expectations.  On the other hand, telecoms shares provided the most significant drag on index performance during the month (albeit they still rose), on the back of relatively lacklustre earnings and a rise in bond yields.

Internationally, the Bloomberg Barclays Global Aggregate Bond Index (A$ hedged) returned 0.47% as bond yields rose by five basis points in the United States but fell marginally in the United Kingdom and Germany as the ECB announced its “dovish” policy tightening and inflation readings continued to surprise on the downside.  In the US, 10-year Treasury bond yields rose from 2.33% per annum to 2.38% per annum.

The information contained in this Market Update is current as at 10/11/2017 and is prepared by GWM Adviser Services Limited ABN 96 002 071749 trading as ThreeSixty Research, registered office 105-153 Miller Street North Sydney NSW 2060. This company is a member of the National group of companies.