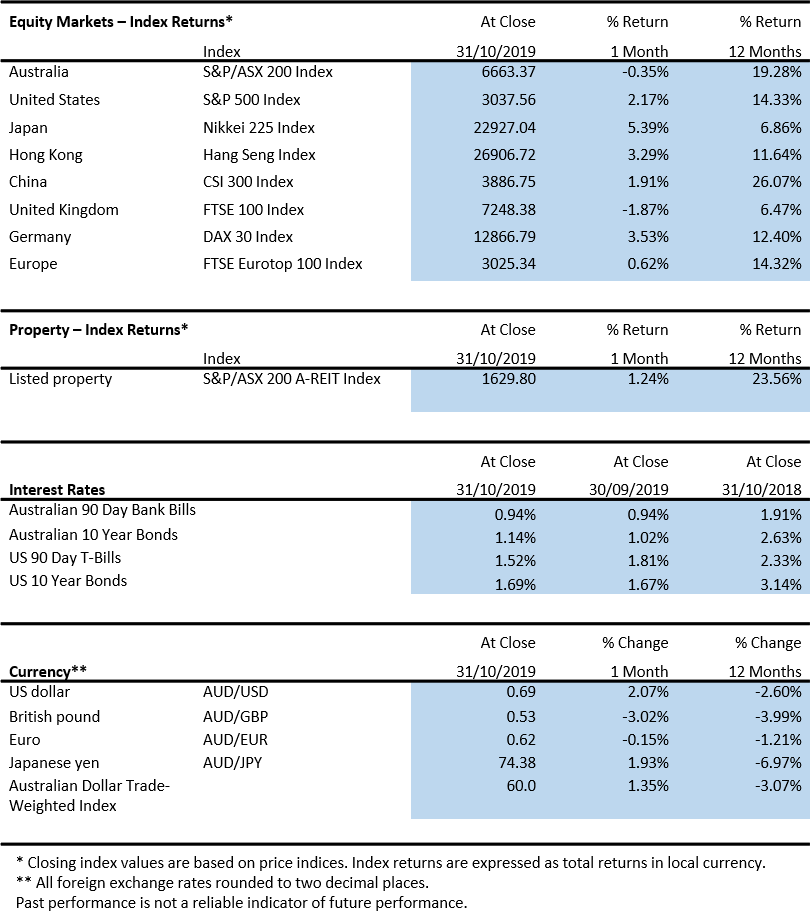 While no firm agreement has been made, the US and China appear to be moving to a phase one deal, which may be followed by the rolling back of some tariffs. The trade conflict is starting to bite for the world’s two largest economies, with economic data pointing to a continued slowdown in global growth, especially in the manufacturing sector.

October saw a détente in the US-China trade conflict, as President Trump announced the suspension of tariff hikes on US$250 billion of Chinese goods, while China agreed to buy $40–50 billion in US farm products. The ‘agreement in principle’ does not roll back the existing tariffs that China and the US have in place. To this point, the trade-exposed, manufacturing and investment sectors that have borne the brunt of the slowdown. The services sector, which represents around 85% of the economy, continues to expand, albeit at a slightly slower rate. The ISM manufacturing index rose from 47.8 to 48.3 in October, but the sector remains in contraction. The services sector rose from 52.6 to 54.7, reflecting the robustness of the consumer sector. While below the average of recent years, it still falls comfortably within the expansion zone. In its latest global growth update, the IMF projected US GDP growth of 2.4% in 2019 and 2.1% in 2020—clearly not a recession. Retail spending slowed in September, falling 0.4%, but the annual growth rate is 4.0% in nominal terms and 3.7% for core retail sales. Consumer confidence, however, appears to have rolled over while CEO business confidence has been declining for the past six quarters. Clearly, the uncertainty associated with the trade wars is having an impact on investment plans and confidence more generally.

The IHS Markit Eurozone Composite PMIs present a grim picture of slowing growth and declining inflation. The index suggests that activity in the eurozone will be lucky to have grown by 0.1% in the September quarter, with flagging momentum at the start of the December quarter. In Germany, the manufacturing sector outlook is described as “simply awful” as trouble in the auto industry and Brexit uncertainty have paralysed order books. According to the survey, September saw “the worst performance from the sector since the depths of the financial crisis in 2009.” The weakness in German manufacturing has led to calls for the government to abandon its commitment to balanced budgets and allow fiscal policy to provide stimulus. Industrial production (excluding construction) fell 5.5% over the year to August and has fallen 7.0% since the recent peak in November 2017. France and Italy are also close to stalling and Spain has seen growth slow to the joint-lowest in around six years. Outgoing ECB president Mario Draghi said the eurozone economy faced a much more “prolonged sag” than was expected even a few months ago. Those hoping for a timely Brexit resolution have again been disappointed. The British people will head to the polls on 12 December, with a four-corner contest that could prove risky for prime minister Johnson.

The Chinese economy slowed to an annual growth rate of just 6.0% in the September quarter—the slowest pace in almost 30 years. However, to put this growth in perspective, the Chinese economy is more than 2.5 times the size it was in 2009, while GDP per capita has doubled over this period. Over the past 12 months a downturn in industry, trade and construction underpinned the weaker GDP result, partly offset by solid service sector performance. Industrial production in September was up a surprising 5.8% year-on-year, from 4.4% in August, while retail sales grew by 7.8%, up from 7.5%. Investment growth was 5.4%, with manufacturing sector investment weak, while utilities and transport spending are not showing a large response to significant political and financial support for local government authorities in 2018-19. China has taken a relatively cautious approach in dealing with the slowing economy. Stimulus to date has largely avoided dramatic increases in government spending and the central bank has also mainly used the reserve requirement ratio for banks instead of sweeping interest rate cuts. In October another cut in the reserve requirement ratio was announced, although the fear is that this easing may be too little, too late to prevent a more serious downturn.

As in several other countries, weakness in Japan’s manufacturing sector is being offset by continued strength in the services sector. The Jibun Bank Japan Services PMIs suggest GDP growth in the September quarter may come in at around an annualised 1.0%. The Bank of Japan’s quarterly Tankan survey indicates that sentiment among large manufacturers fell to its lowest level in more than six years, while the external sector remains precarious. Exports fell 8.2% over the year to August, with exports to China falling 12.1%, those to South Korea falling 9.4%, and those to the US falling 4.4%. Exports are suffering from the global slowdown and the strength of the Japanese yen, while imports have fallen 12% over the year. The sales tax was increased from 8% to 10% in October and there is some evidence that supermarket sales fell sharply early in the month. The government had introduced a reward points system for shoppers, which involves the use of a cashless payment method to smooth out demand. In India, economic data points to weaker growth, while the IMF cut its forecast for 2019 GDP growth from 7.3% to 6.1%. Growth over the April–June period was only 5.0%, the slowest pace in six years. While inflation ticked higher in September, the market still expects the Reserve Bank of India to cut rates by a further 25 basis points in December.

The Reserve Bank of Australia cut rates to a record low 0.75% in early October, it’s third move since June. The aggressive approach taken by the RBA over recent months is partly in response to the global trade uncertainty and the domestic housing sector slowdown. Easing policy globally and a rising unemployment rate locally made the case for an easing bias a relatively simple one. However, the economy’s response to the easing cycle, along with moves by APRA to free up some lending capacity and the government’s tax cuts, has been subdued, at least to date. The labour market remains strong, with jobs growth of 14,700 in September. Annual growth in employment is 2.5%, while hours worked are up 1.9%. Although the unemployment rate edged down to 5.2%, jobs growth has proved insufficient to absorb the growing workforce resulting from a solid 1.6% growth in population and rising workforce participation rates. The latest NAB survey data confirm the sluggish state of the economy, although the mining and finance industry sectors seem to be faring better than other industries, particularly retail. The government, despite reporting a balanced budget for the first time in 11 years, seems intent on maintaining a strong fiscal position. While commendable for the long term, this stance appears to ignore the opportunity for an upgrade and expansion of infrastructure spending at a time when borrowing rates are at record lows.

Following relatively strong performance in the September quarter, the outlook appears mixed across most sectors. Australian shares were in the red in October, dragged down by the Information Technology (-3.9%) and Financials (-2.8%) sectors. Optimism among investors is being driven by monetary stimulus, signs of a recovery in the housing market, and a soft Australian dollar, which boosts earnings from foreign operations. Working in the opposite direction is sluggish wages growth, relatively weak building and construction activity, and an uncertain global outlook. Returns for interest rate sensitive sectors (e.g. Utilities and Property) are expected to continue to be supported by the search for income and historically low bond yields. Financials remain under pressure from an industry perspective with bank profit growth expected to be moderate due to constrained lending and net interest margin pressures. IT stocks are trading at expensive valuations and look increasingly vulnerable without supportive earnings growth. Health Care (+7.6%) was the standout sector in October, with giants CSL (+9.6%) and Resmed (+7.2%) both contributing to the performance, while among the Industrials (+3.0%) Sydney Airport (+9.3%) and Seven Group (+7.7%) were among the top gainers.

The trade wars have weighed on business sentiment, which is taking its toll on manufacturing and export-sensitive sectors across several regions, particularly Europe, Japan and China. However, the services sector has remained relatively resilient, driven primarily by the robust US consumer sector, which is enjoying healthy balance sheets, steady employment and wage growth, and low interest rates. Emerging markets remain in the passenger seat of the ongoing trade wars, which saw emerging market equities remaining under pressure. Export-dependent economies such as China, Taiwan and South Korea continue to feel the negative impact, which has been exacerbated by tensions between Japan and South Korea. Global developed market shares (ex-Australia) gained only 0.5% in October in Australian dollar terms as the global outlook moderated. The US S&P 500 Index rose 2.2% in US dollar terms, led by the Healthcare (+5.0%) and Information Technology (+3.8%) sectors. European shares, measured by the STOXX Europe 600 Index, gained a modest 0.9%, with a bounce from the auto sector (+6.9%) and construction (+3.5%).

From a macro perspective, Australian real estate capital values appear to be late in the cycle, with ‘lower for longer’ monetary policies extending cycle duration. Moving forward, growth is likely to be driven by asset-level net operating income growth, rather than further capitalisation rate declines. The retail landscape is experiencing a bifurcation and ‘flight to quality’, where foot traffic (and dollars) are increasingly flowing to shopping centres that are grocery anchored or have a mix of experiential retail offerings in densely populated primary trade areas. Despite capitalisation rates falling to historic lows, the logistic and industrial sector continues to enjoy robust investor demand. The rise of e-commerce has translated into higher tenant demand for well-located warehouses, logistics and distribution centres with good transportation links and population proximity. Sentiment towards the residential sector has continued to improve on the back of the RBA’s successive interest cuts and APRA easing its credit lending guidelines, which is filtering through to prices for mainly existing houses. In the US, retail securities (especially Shopping Centres) have performed reasonably in recent months, in line with the broader market switch to value stocks. While this is unlikely to herald a prolonged period of outperformance, it demonstrates that investors recognized that parts of the retail sector had been over-sold.

After a brief pause, the RBA continued its easing bias in October with a 25-basis point reduction in the cash rate to a historic low of 0.75%. The decision was taken in order to support employment and income growth, and to provide greater confidence that inflation will be consistent with its medium-term target. Australian government bond prices moved higher in September, in tandem with its US and German counterparts as risk-off sentiment dominated the past quarter. However, the trend reversed somewhat through October with demand for safe-haven assets weakening as investors flocked back to risk assets. Australian bonds returned -0.5% in October as yields edged back up, while global bonds, measured by the Bloomberg Barclays Global Aggregate Index, fell 0.3% in Australian dollar hedged terms. Going forward it is expected that global yields will continue to remain at low levels with most central banks returning to easing mode amid sluggish growth outlook. Spreads have been gradually widening since the end of August but are still narrow, with the 10-year minus 2-year spread at around 17 basis points at the end of October.

The Australian dollar has remained in the 67–69 US cent range since the end of July, constrained by the lower interest rate outlook and falling commodity prices. The US dollar remains relatively stable despite Fed easing, mostly due to the lack of attractive alternatives. Should the Fed follow through with rate cuts as implied by the market (which expects a rate of 1.25% by early 2021), the Australian dollar may start to see some appreciation against the greenback.