Marriage equality in the workplace 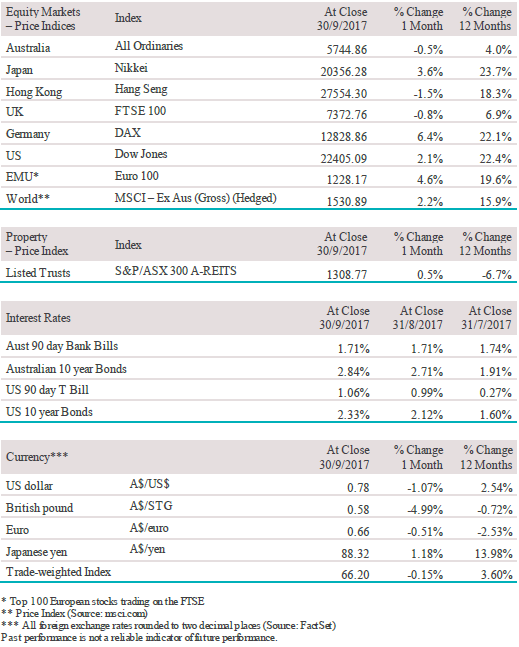 Equity markets posted strong returns in September as geopolitical tensions with North Korea subsided and investors focused on elections in Germany and Japan and the US Fed’s plans to begin shrinking its US$4.5 trillion balance sheet starting this month.

Despite some distortions in the economic data caused by recent hurricanes, most of the data in the US has continued to show relatively strong economic activity. Unemployment has fallen to new cyclical lows of 4.2%, and the uptrend in wages growth appears to have resumed with the most recent reading showing annual wages growth at close to 3%. The ISM survey of manufacturing firms rose to a new 13-year high and the ISM survey of non-manufacturing firms also rose strongly, to its highest level since 2005, suggesting US firms are enjoying strong business conditions. At its September meeting, the US Federal Reserve announced that it would unwind its balance sheet and that it expects to continue with its policy of normalising interest rates over the next two to three years.

In the Eurozone, business, consumer and economic sentiment surveys all suggest that the economy continues to perform well. Recent industrial production and factory order data from Germany has confirmed that business activity in Germany is still strong despite the headwinds to German exporters from the stronger Euro. In the recent German elections the return of Angela Merkel (albeit with the weakest voting performance since 1949) allows Merkel to build a governing coalition and also allows the European Central Bank to signal its intention to taper bond purchases in the next month or so.

Chinese data over the past month has continued to be somewhat mixed. The official government PMIs, which tend to measure activity levels at the larger Chinese manufacturing and non-manufacturing firms, both rose to the highest levels in several years, while the privately-commissioned surveys (which tend to measure small to mid-sized business activity) showed softer conditions. The monthly measures of growth in fixed asset investment, retail sales and industrial production were also weaker than expected and weaker than the prior month, potentially confirming the economy is entering the widely-expected second half slowdown as the government reigns in excess capacity in some parts of the economy.

In Japan, the Bank of Japan’s quarterly Tankan survey showed that both big and small Japanese manufacturers are the most confident about business conditions in a decade, helped by a weaker Yen and strong global demand. The survey also revealed that the proportion of companies finding it difficult to hire workers is now at a 25-year high. The upbeat data could help Prime Minister Shinzo Abe convince voters at this month’s election that his “Abenomics” stimulus policies have improved prospects for sustained economic recovery which will lift wages and household spending, even if inflation takes some time to return to the 2% level targeted by the Bank of Japan.

In Australia, the strong business conditions are continuing to create relatively robust jobs growth. Employment grew more strongly than expected in August and, pleasingly, there has been a rebound in the number of full-time jobs which had lagged part-time job growth.  However, while businesses are enjoying strong conditions, consumers are not so optimistic with evidence of belt-tightening showing in recent retail sales figures, which have now declined for two months in a row. This is most likely due to higher mortgage rates on some loan types (e.g. interest only), weak wages growth and higher energy costs. For this reason the RBA is expected to keep interest rates on hold.

The S&P/ASX 200 Accumulation Index was essentially unchanged in September. The local share market saw healthcare and energy stocks outperforming the broader index by 2.2% and 1.2% respectively. The healthcare sector was primarily driven by a rally in CSL (+4.9%) and Cochlear (+3.5%) while Santos (+8.5%) and Oil Search (+6.0%) were the standout performers in the energy sector. The real estate sector, led by Lend Lease (+10.1%) and Westfield (+5.5%), also contributed positively as did financials with NAB (+4.3%) and Westpac (+2.1%) performing well. Telecommunications shares (-4.6%) were again led down by Telstra (-5.2%) and TPG Telecom (-11%), with the sector now down 32% for the year. Utilities, in part affected by the rise in bond yields, came under further pressure with Spark Infrastructure (-4.7%), AGL (-2.6%) and APA (-5.8%) being the worst performers for the month. 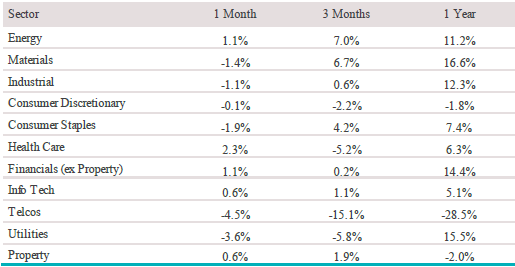 The MSCI World ex-Australia Index (in local currency terms) returned 2.4% in September, however, a small fall in the Australian Dollar meant the index rose 3.5% in Australian Dollar terms. Energy shares had the best performance, rising 8.4% due to a 9% rise in crude oil prices due to renewed demand from US refiners after Hurricane Harvey which saw the International Energy Agency revise up its forecasts for oil demand. Financial stocks rose 4.0% helped by the rise in bond yields, which simultaneously hurt yield-sensitive utilities stocks which fell 2.4% over the month.

Australian bonds posted another loss (-0.31%) in September as government bond yields rose in Australia and other major bond markets. The higher bond yields were largely driven by reduced geopolitical fears and more hawkish commentary from central bankers in the United States and United Kingdom. Over the month, the two-year Australian Commonwealth Government bond yield rose from 1.90% to 1.96% per annum and the ten-year bond yield rose from 2.73% to 2.84% per annum.

Internationally, the Bloomberg Barclays Global Aggregate Bond Index (A$ hedged) returned -0.43% as bond yields rose by 10-33 basis points in the United States, United Kingdom and Germany. This was helped by the September decision from the US Fed to commence the wind-down of its US$4.5 trillion balance sheet by only reinvesting a portion of cash from maturing bonds into US treasury and agency bonds. In the US, 10-year Treasury bond yields rose from 2.12% per annum to 2.33% per annum.

The information contained in this Market Update is current as at 13/10/2017 and is prepared by GWM Adviser Services Limited ABN 96 002 071749 trading as ThreeSixty Research, registered office 105-153 Miller Street North Sydney NSW 2060. This company is a member of the National group of companies.