The easy way to consolidate your super 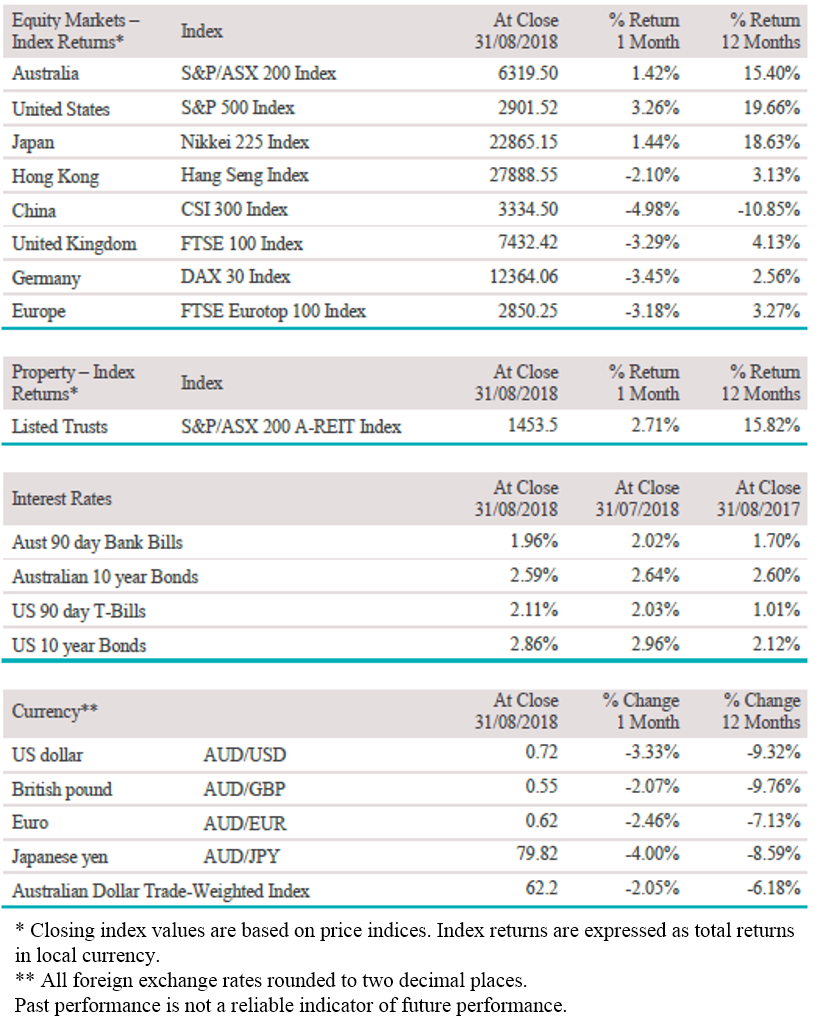 Fears of emerging market contagion have so far been confined to currency markets, with major falls in the Turkish lira and Argentine peso. Trade tensions are still a source of uncertainty, especially among US and Asian manufacturers, but so far the impact on the real economy has been muted. The US growth story was strengthened with an upward revision to GDP and strong jobs numbers, while in Europe growth and inflation remain soft.

The US economy is growing at a solid rate and employment continues to build, but inflation expectations are still largely unchanged and wage growth, while showing some promising signs, remains stubbornly low despite labour market tightness. Trade tensions between the US and China are causing significant uncertainty for manufacturers, but so far demand is holding up well, as evidenced by August’s expansion in new orders. Currency markets have been volatile, in part due to the trade issue. Emerging markets have been severely impacted but US shares continued their rise in August on the back of positive company earnings results. Minutes from the US Fed’s July/August meeting revealed the Fed is generally upbeat about the economy, but debate continues on the significance of yield curve flattening for monetary policy. Markets fully expect a rate rise at the Fed’s next policy meeting on 25-26 September and a further hike in December. The core PCE index—the Fed’s preferred inflation measure—rose to 2.0% year-on-year in July after pulling back to 1.9% in June, meaning it is back in line with the Fed’s target. Average hourly earnings rose by 0.4% in August, pushing the annual rate of increase to 2.9%—the fastest pace since June 2009. Employment continues to grow, with August’s non-farm payroll release revealing an impressive 201,000 jobs were added during the month, beating the expected 191,000.

In Europe, economic growth is maintaining momentum but is largely disappointing in absolute terms, while inflation remains weak and is forecast to remain below target over the next three years. June quarter economic growth for euro member countries was 2.2% year-on-year, and while the ECB expected growth to slow from its peak of 2.5% in 2017, it has slowed earlier than expected, reflecting weaker export performance. ECB President Mario Draghi has played down concerns about an economic slowdown, making it clear that the ECB remains on track to cease bond purchases after December. Despite the trade risks, the euro economies are “proceeding along a solid and broad-based growth path.” Euro area inflation fell in August from 2.1% to 2.0% year-on-year, with a 9.2% rise in energy price inflation helping to prop up the headline figure, while underlying inflation (excluding energy, food, alcohol and tobacco) was down from 1.1% to 1.0%. The UK economy continues to add jobs, with unemployment at 4.0% and possibly set to move lower in September. On the Brexit front, the biggest stumbling blocks remain the Irish border plan and the UK’s post-exit trade relationship with the EU. The next big event is the Conservative Party conference on 30 September, with Prime Minister May needing to satisfy the party’s grassroots before any real concessions can be made to EU negotiators.

China’s headline GDP for the June quarter showed a steady growth rate at 6.7%, but growth in the first half of the year has moderated to 6.4%, with a decline in investment spending being the driving force. The ongoing crackdown on credit growth in the shadow banking sector has been a key factor behind the downturn in investment and the state-owned enterprise sector, while the consumer and services sector has now become the major contributor to growth. China’s debt-to-GDP ratio appears to have stabilised, albeit at very high levels, while the shift in debt growth from the shadow banking sector to the more regulated bank sector is also a welcome development. Investment spending growth eased back to 5.5% in July—the slowest pace in decades—with investment in utilities and the transport sector turning down sharply after years of rapid growth. Measures of manufacturing activity show industrial production growth relatively steady at around 6.0%, while PMI readings eased further in August. The People’s Bank of China has improved liquidity by lowering reserve requirements for banks, but this has contributed to lower market interest rates and a lower yuan. The Chinese currency has lost 8.0% against the US dollar since the end of March due to domestic easing measures, US Fed tightening, and concerns over a possible trade war.

Japanese GDP grew by 0.5% in the June quarter or 1.9% annualised, recovering from a contraction of 0.9% in March. This means the economy has grown by a meagre 1.0% over the year, although conditions appear to be improving, led by solid growth in investment and promising signs in inflation and wage growth. The Nikkei Japan PMIs suggest business conditions in the service sector are improving at a mild pace, with the rate of job creation the strongest in 14 months and among the fastest recorded since the index began in 2007. In the goods-producing sector, export orders fell in August and some respondents noted weaker sales to Chinese customers. Ministry of Finance figures released in September showed a jump in corporate investment for the June quarter of 12.8% on the previous year, raising hopes for a sustainable economic recovery led by the private sector. India remains the fastest growing major economy, with June quarter GDP growth hitting 8.2% year-on-year, an increase on the 7.7% growth in the previous quarter. According to the Indian government, growth was driven by an uptick in consumer spending, construction activity and corporate investment.

Australia’s economic growth was a stronger-than-expected 0.9% for the June quarter and 3.4% year-on-year—the fastest growth since 2012 during the height of the mining boom. Growth was boosted by a 0.7% rise in consumer spending, despite headwinds from low wage growth and falling house prices. The June figures compare favourably to the 2.9% growth for the 2017-18 financial year, as well as the RBA’s estimate of just over 3.0% for 2018 and 2019. However, while headline growth is strong, wage growth remains modest, with spending growth supported by a falling savings ratio. Gross operating surplus for all industries increased 7.2% year-on-year with the mining industry the main contributor, driven by both higher production and continued strength in commodity prices. It is no surprise that the RBA has kept rates unchanged at current low levels. Inflation and wage growth are not consistent with higher rates, while declining house prices combined with tighter credit conditions means the RBA will be carefully monitoring developments over the coming quarters. June quarter data showed private sector wages grew by a slightly stronger 0.6% for the quarter but only 2.0% for the year, essentially flat in real terms.

The S&P/ASX 200 Index returned 1.4% in August, with the Telecommunications (+13.1%), Information Technology (+12.9%) and Health Care (+10.7%) sectors among the top gainers. TPG (+50.0%) and Vodafone announced a merger that will provide a major third challenger to Telstra (+9.2%) and Optus, with a combined enterprise value of $15 billion. The merger is positive news for markets, as it should result in stabilising Average Revenue Per User (ARPU) but could raise competition concerns. Earnings season saw a flurry of buying in the IT sector on the back of positive earnings results, including from language and search data services company Appen (+41.2%), which announced revenue growth of 106% in H1 2018, driven by both organic growth and its Leapforce acquisition. Energy stocks (-1.3%) were down, due predominantly to major gentailer Origin Energy (-18.6%), with its Energy Markets division bolstered by higher wholesale electricity prices but underlying earnings impacted by competition and higher-than-expected currency hedging costs. Both Origin and AGL (-5.5%) are also subject to regulatory uncertainty with the scrapping of the National Energy Guarantee (NEG). The Materials sector (-4.8%) took a hit in August as commodity prices tumbled and the US dollar rose on fears of emerging market contagion and trade tensions between major economies. 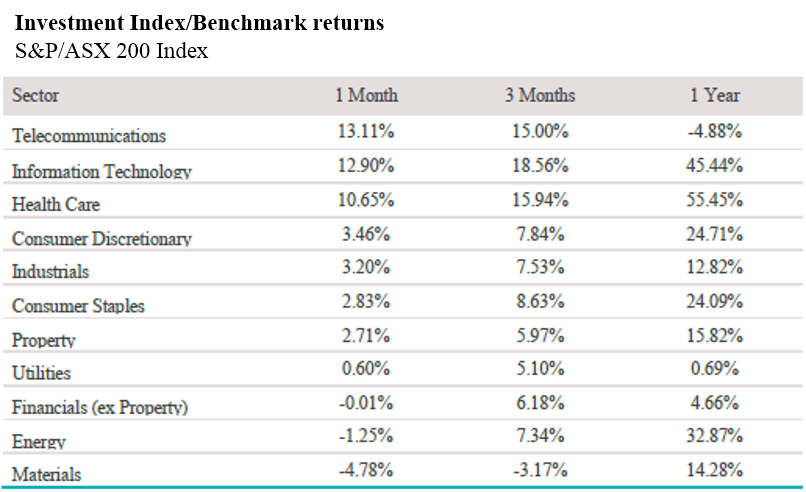 Global developed market shares, measured by the MSCI World Ex Australia Index, returned 4.9% in Australian dollar terms, driven by US share performance and a rising US dollar. The US S&P 500 Index returned 3.2% in local terms, with Information Technology (+6.7%) the top performing sector, followed by Consumer Discretionary (+5.0%) and Health Care (+4.2%). Apple (+19.6%) continued its inexorable rise through August, reporting revenue growth of 17% over the year, strong demand for the iPhone X and robust growth in services like Apply Pay and Apple TV. Amazon (+13.2%) drove gains in the consumer discretionary sector, becoming the second stock after Apple to reach a US $1 trillion market cap. European shares, measured by the broad STOXX Euro 600 Index, were down 1.8% in August, with falls from Banks (-8.1%), Telecommunications (-7.1%) and Basic Resources (-6.8%). The MSCI Emerging Markets Index was steady in August in Australian dollar terms, but certain emerging market indices were hit hard in local currency terms, including China’s CSI 300 Index (-5.0%) and Turkey’s Borsa Istanbul 100 Index (-4.4%). Recent emerging market volatility began in Turkey as the result of the country’s weakening fiscal position, a strengthening US dollar, and a potential trade war with the US. However, investors fear these issues may become systemic within the emerging markets sector.

The S&P/ASX 200 A-REIT Index returned 2.7% in August led by industrial property manager and Amazon landlord Goodman Group (+11.1%), which announced better-than-expected operating profit for FY 2018. The retail sector continues to drag due to both structural and cyclical headwinds, with income growth among shopping centre portfolios lagging office and industrial. BWP Trust (-2.4%), whose core tenant is Wesfarmers owned Bunnings Warehouse, came under pressure in August due to flat results and concerns that the transitioning of some Bunnings stores to alternative uses may result in rent-free periods. Scentre Group (-3.3%), the manager of Westfield, was lower in August despite announcing a 3% rise in funds from operations, with leasing spreads (the difference in rental terms between new and existing leases) falling from -2.5% to -6.6% over the past year. Globally, developed market property rose 1.1% on a hedged basis in August. US REITs had a solid month, with the Bloomberg US REIT Index up 2.2%, with gains from the Health Care (+6.4%), Single Tenant (+3.7%) and Mall (+3.1%) sectors.

The Barclays Global Aggregate Index returned 0.3% in AUD hedged terms, with developed market yields largely holding firm on the back of positive economic data, while yields in some emerging markets fell sharply. The US 10-year Treasury yield held below 3.00% throughout August, falling as low as 2.82% before rising above 2.90% in early September following strong jobs numbers. The 2-year yield finished August at 2.63% before climbing to 2.71% in early September—its highest level in more than 10 years. The latest growth and inflation data leave the US Fed in tightening mode, with a 25 basis point hike expected in September and a strong likelihood of another move in December. Markets are concerned that central banks in Turkey, Argentina and other emerging markets may need to draw down heavily on foreign exchange reserves, including US Treasuries, to stem pressure on their currencies. Locally, Australian bonds returned 0.8% in August, with Australian corporate debt returning 0.8% and government debt returning 0.9%, while long-term government bonds (with a maturity of ten years or more) returned 1.5%.

Strong US growth relative to other major developed economies has seen the US dollar gain 6.2% against the euro and more than 8.2% against the pound since the end of March. The rise in the US dollar has been even more pronounced against many emerging market currencies, particularly those with large current account deficits and external debt positions. The Australian dollar fell against major currencies in August, including the US dollar (-3.3% to 0.72), British pound (-2.1% to 0.55), euro (-2.5% to 0.62) and Japanese yen (-4.0% to 79.82).

The information contained in this Market Update is current as at 12/09/2018 and is prepared by GWM Adviser Services Limited ABN 96 002 071749 trading as ThreeSixty Research, registered office 105-153 Miller Street North Sydney NSW 2060. This company is a member of the National group of companies.