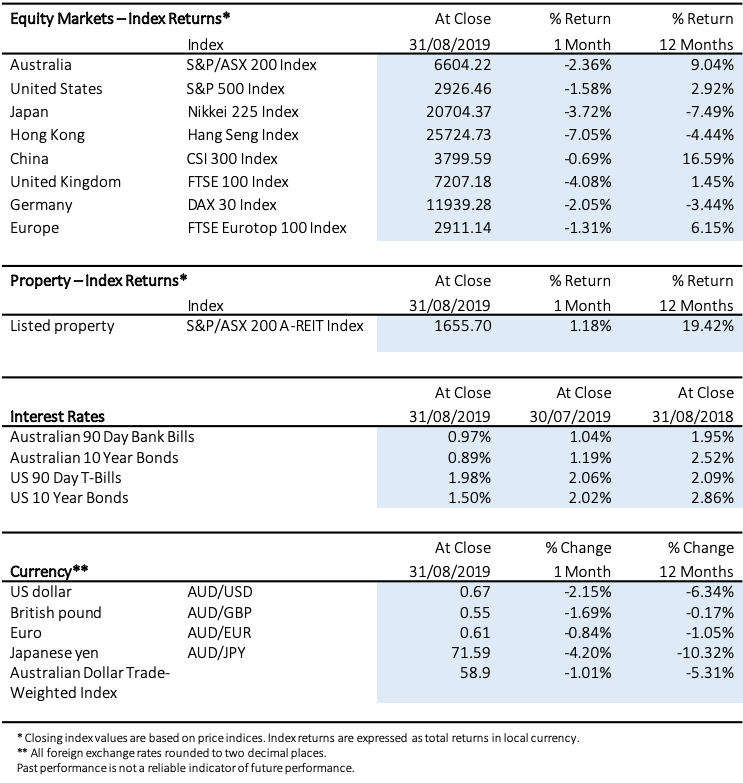 The renewed bout of risk aversion through August and September reflected the escalation in the US-China trade and technology war, along with evidence of further slowing in the global economy. An inversion of the yield curve rattled markets, giving rise to the debate about the timing of the next recession and whether the US Fed was doing enough to fight the slowdown.

President Trump voiced his disappointment in the Fed’s “hawkish cut” at the end of July, announcing a 10% tariff on the remaining un-tariffed Chinese goods, valued at around US$300 billion. China followed suit with new tariffs of 10% and 15% against the remaining US$75 billion of US imports. Equity markets tumbled in unison with the decline in bond yields, while the US 30-year yield moved below the 2.00% level for the first time. There are also legitimate concerns that business confidence and investment intentions will be impacted by the uncertainty over trade and growth more generally, raising the risk that a downturn becomes self-fulfilling. Markets are now factoring in a 100% likelihood of a September cut to the Fed funds rate and expect a further 50 basis points by year-end to 1.50%. GDP growth for the June quarter was an annualised 2.0% and broadly in line with expectations. The ISM Manufacturing PMI fell into contraction in August, with the new orders component dropping 3.6 points to 47.2 and production falling 1.3 points to 49.5. Non-farm payrolls recorded an additional 130,000 jobs in August, which was below expectations and included around 25,000 temporary government positions created to prepare for the 2020 census.

Europe’s slowing growth is leading to weak inflation, with the core CPI (excluding food and energy) steady at 0.9% in August having fallen from 1.1% in the previous month, while headline inflation was steady at 1.1%, well below the ECB’s 2.0% target. The weak June quarter GDP numbers and the soft growth outlook together with recent falls in inflation have led the ECB to consider a range of stimulus options to ensure that inflation does not persistently undershoot. However, similar policies in the past have not been successful and it may be that the time for more direct stimulus to economic activity is approaching. Bond yields in Europe fell sharply, reflecting the weak growth in the zone and the possibility of the ECB resuming QE and again buying bonds. A contributory factor to the fall in yields is likely the fact that the ECB has already bought a significant share of the available bonds and is limited to the share that it can buy. In Germany the government is obligated to run a budget surplus, thereby limiting the supply of new bonds. After replacing Theresa May as UK prime minister, Boris Johnson has faced a series of defeats in the House of Commons. After expelling 21 rebel MPs from his own party and facing resignations from two ministers, thereby losing his slim majority, Johnson failed to get the two-thirds majority required to hold an election on his preferred date of 15 October and will be forced to ask the European negotiators for an extension to the fast-approaching deadline of 31 October.

The ratcheting up of the US-China trade war in early August caught markets by surprise. US President Trump signalled his intention to place a 10% tariff on the remaining US$300 billion of Chinese exports to the US from 1 September. The announcement came just days after what was described as “constructive” talks in Shanghai, with Trump threatening to increase the tariff to 25% if China failed to move quickly to reach a trade deal. In the following days, the USD/CNY currency pair broke through 7.0 US dollars, marking the weakest level for the yuan in 11 years. On the data front, economic news has been weaker than expected. August’s manufacturing PMI reading revealed further contraction, falling from 49.7 to 49.5, while the Caixin Manufacturing PMI, an independent survey covering smaller factories, rose slightly from 49.9 to 50.4. Industrial production growth fell to 4.8% year-on-year, the lowest reading in 17 years, while retail sales growth eased back to 7.6% from 9.8%. For now, it appears the Chinese economy is achieving its 6.0–6.5% growth target but the simmering trade war continues to skew risks to the downside. Further easing in policy is widely anticipated as a result.

The Japanese economy grew by more than expected in the June quarter. GDP grew 0.3% (1.3% year-on-year), which was lower than the 0.4% recorded by the flash estimate a few weeks prior but still better than the 0.1% originally anticipated by the market. The result is likely to strengthen Prime Minister Abe’s resolve in pushing ahead with the planned consumption tax rise from 8.0% to 10.0%, despite the risk that it could trigger a growth slump in the September quarter as consumption is brought forward to avoid the tax. Meanwhile, the Jibun Bank Japan PMIs paint a less positive picture. While activity in the services sector indicates modest growth, the manufacturing sector contracted in August for the fourth month in a row due to production cutbacks and softer growth across Asia, especially China, which dented exports. Vietnam is one market benefitting from the US-China trade dispute, with the resulting diversification in the supply chain leading to strength in manufacturing and exports. Manufacturing migration from China to Vietnam is already happening, with GoerTek shifting its Apple AirPods production and Google moving its Pixel smartphone production across the border. Vietnam has also signed a trade deal with the European Union, which has only broadened its appeal.

Australia’s GDP growth for the June quarter recorded only 1.4% year-on-year, the worst result since the GFC. While in line with expectations, the result highlights the challenging environment on the spending side of the economy, with state final demand (a broad measure of spending) recording zero quarterly growth in NSW. The unemployment rate was steady in August at 5.2% and the RBA expects this rate to hold through 2019 and 2020 before falling to 4.75% in 2021 (versus a previous forecast of 5.0%). The updated forecasts indicate that unemployment will remain well above what is now considered to be full employment at around 4.5%. This excess capacity in the labour market keeps wages growth lower for longer. Meanwhile, core or underlying inflation is also anticipated to fall short of the bank’s mandate. Core inflation reached 1.5% year-on-year for the June quarter, and the RBA expects it will pick up to 1.75% in 2020. The updated projections justify the back-to-back easing undertaken in June and July, and the market’s pricing of a further two moves in the cash rate to 0.5%. The RBA has also signalled that it is prepared to consider adopting “unconventional” policy moves if warranted. The key to whether such measures will be used will be triggered by developments on the global growth front, in particular, the global trade situation.

Australian shares suffered a fall in August as global pressures weighed on sentiment while earnings season mostly delivered in line with expectations. The S&P/ASX 200 Index returned -2.4% over the month, with the Materials (-7.5%) and Energy (-5.6%) sectors the hardest hit. Australia’s largest building materials maker Boral (-17.6%) suffered a sharp fall after reporting a 7% drop in underlying net profit for FY19, with cost improvements in its US division failing to make up for the slump in construction activity in Australia. Oil and gas engineering group WorleyParsons (-23.9%) sold off heavily despite posting better-than-expected revenue and profit growth, but with management flagging “macroeconomic global uncertainty” and shying away from offering a forecast for FY20. Bucking the trend was the Health Care sector (+3.6%), which saw solid gains from disinfectant innovator Nanosonics (+21.1%), which announced a 39% increase in revenue and installed base growth of 18%, while ResMed (+8.4%), the manufacturer of products treating sleep apnoea, continued to surprise investors on the upside with earnings growth of 10.6%, with the market upbeat about its expanding product portfolio. The Information Technology sector was flat in August but Afterpay Touch Group (+15.9%) was the standout performer, enjoying full-year underlying sales growth of 140% and growing its US customer base to 2.1 million only 15 months after launch.

Global equity markets could not withstand the pressure of renewed trade tension and a host of other geopolitical risks dominating the headlines in August. The MSCI World Ex Australia Index returned 0.3% in Australian dollar terms but fell 2.0% in local currency terms. The US S&P 500 Index fell 1.6%, with the Energy sector (-8.7%) solidifying its position as the worst performer over 12 months, although its representation in the index has shrunk significantly since the oil market highs in mid-2008, while the higher-yielding Utilities (+4.7%) and Consumer Staples (+1.6%) sectors were the only ones to finish the month in positive territory. Steep selling occurred midway through the month, triggered by a brief inversion of the yield curve between 2-year and 10-year Treasuries. Volatility returned to the share market, with the CBOE Volatility Index rising from July’s low of 12.1 to 24.6 at the start of August and remaining at elevated levels. The STOXX Europe 600 Index fell 1.6% in August, with resources shares (-9.0%) and banks (-7.0%) the worst-performing sectors. The ECB’s commitment to further stimulus has not helped Europe’s banking sector, with lower rates putting pressure on lending margins and hampering growth. In the UK, the Brexit issue remains a source of uncertainty despite a change in leadership, with the FTSE 100 Index falling 4.1% as further deadlock appeared to be the only visible outcome.

After a year and a half of continuous monthly declines, Australian house prices began to flatten in mid-2019 as interventions like interest rate cuts and relaxed lending rules lured buyers back to the market. It remains to be seen how lower interest rates filter through to the housing market and whether the availability of credit to the banks will help to produce a rebound. For listed property, it was a tough month in August, but the sector managed to produce a small positive result, with the S&P/ASX 200 A-REIT Index returning 1.2%. The Charter Hall Long WALE REIT (+14.0%) was the top performer after reporting a 25% rise in EPS and a 6% rise in dividends. Shopping Centres Australasia (+7.8%) and Scentre Group (+1.3%) had a positive month, while the Charter Hall Retail REIT (-3.5%) and Vicinity Centres (-0.8%) finished the month in the red. The sector continues to benefit from the hunt for yield, which is being exacerbated by the market’s expectations for lower interest rates, while rental and earnings growth appear relatively robust across most sectors. US REITs had a positive month, rising 3.3%, with gains from the self-storage (+8.9%) and single-tenant (+7.6%) sectors, while regional malls (-8.3%) and hotels (-4.1%) were a drag on the index.

The bond rally continued unabated through August as markets foresaw further cuts to interest rates and investors sought safe-haven assets and jurisdictions to avoid the fallout from the trade war and other geopolitical risks. Credit spreads have been steadily rising since January 2018 and are expected to continue to widen as the outlook for economic growth continues to deteriorate. The market value of negative-yielding bonds tracked by the Bloomberg Barclays Global Aggregate Index rose to US$17 trillion and now makes up around 30% of the index. European safe-havens like Germany and France make up the lion’s share (if you can call it that), with more than 80% of Germany’s federal and regional government bonds in the red. Corporates have taken advantage of the steep fall in benchmark rates to raise debt, with big names like Apple, Deere and Disney issuing 30-year bonds with yields below 3.0%. US 10-year Treasury yields fell through August from 2.02% at the start of the month, hitting a low of 1.46% in early September before climbing back to 1.57% at the time of writing. Similarly, Australian 10-year Treasury yields fell from 1.19% to a low of 0.88% mid-month, recovering to 1.09% in early September.

The Australian dollar weakened 1.0% in August in trade-weighted terms and 2.2% against the US dollar. Weakness against the greenback is due to the outlook for interest rates and investors’ preference for safe-haven assets. The US Fed is expected to cut rates further this year, but it appears likely that the RBA will cut by more, which has led to the US dollar appreciating with respect to the Australian currency.