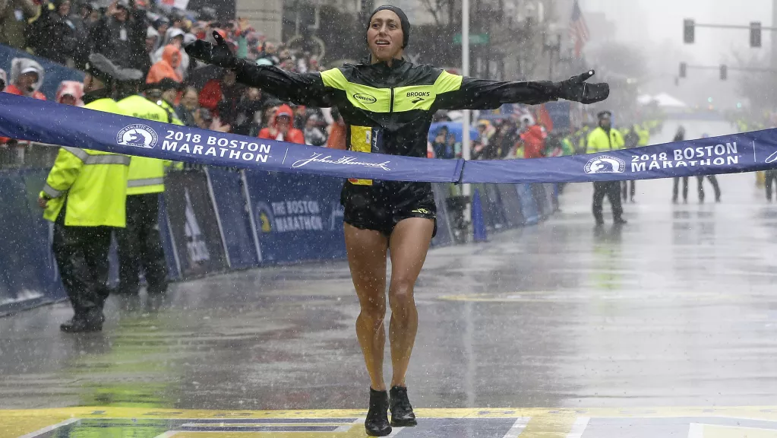 Desiree Linden, of Michigan, wins the women's division of the 2018 Boston Marathon. She was the first American woman to win the race since 1985.

My sister is one of my life heroes and it seems that she is always finding new ways to impress me. She has represented Australia in triathlon and has numerous podium placements in gruelling iron man endurance events. She says one of her toughest races was the recent Boston marathon, with some of the worst weather on record. Temperatures were around freezing throughout the day, and persistent heavy rain and fierce winds hampered runners throughout the 42-kilometre course. 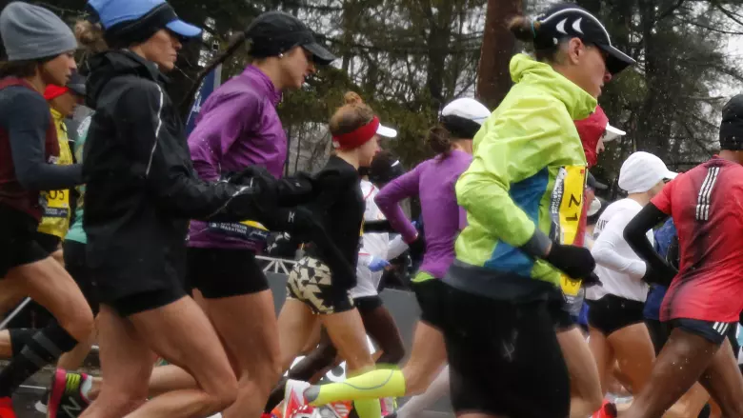 The elite women’s pack in the early stages of the 2018 Boston Marathon.

Unsurprisingly the challenging weather resulted in winning times that were the slowest since the 1970s and the dropout rate was 50 per cent higher than last year.

However, a great piece in The New York Times points out that the finishing rate varied markedly by gender. For men, the dropout rate was almost 80 per cent higher than 2017, but for women it was only up 12 per cent. This is not a one-off, with women also finishing at higher rates than men in the 2012 event, with its unusually hot conditions, the only other occasion between 2012 and 2018 when they did.

There are lots of potential physical reasons why female athletes might have better endurance than their male peers under extreme conditions. But there are also psychological reasons and understanding this could benefit us all, given that managing money over the course of your lifetime is a bit like a marathon.

When asked about the lower rates of female attrition in Boston, the elite distance coach Steve Magness suggested: “women generally seem better able to adjust their goals in the moment, whereas men will see their race as more black or white, succeed or fail, and if it’s fail, why keep going?”

When it comes to managing money, we are all hit by the unexpected. We might lose a job, find that illness reduces our earning capacity and increases our costs, or that investment returns are substantially below expectations. Being realistic about what is achievable in these changed circumstances and refocusing our efforts on achieving revised goals is extremely valuable. Feeling like a failure, becoming despondent and giving up is not only financially damaging, it is also detrimental to mental health.

When it comes to marathons, women are known to pace themselves better than men. Women tend to take less risk in their race strategy, starting out more conservatively, allowing them to maintain a steady pace throughout the race. This means they are less likely to go too hard, too early, blow up and then drop out.Pace is also important financially. Rather than taking excessive risks to get rich quickly, start to save and invest from the earliest stage you can, with tiny amounts if that’s all you can manage. The value is in establishing healthy financial disciplines, harnessing the power of compounding, and maintaining across the course of your life. A great resource that encapsulates this philosophy is Sarah Riegelhuth’s book and website Get Rich Slow.

Reach out for help

One of the striking features of female competitors in this year’s Boston marathon, is the way in which they supported each other. There are numerous examples of women slowing down to run together and the urging each other on to the finish line. The most notable is Desiree Linden who struggled in the early stages and confided in race favourite Shalane Flanagan that she might quit. However, she persevered to support Flanagan and actually went on to win the race herself.

Desiree Linden, of Michigan, wins the women’s division of the 2018 Boston Marathon. She was the first American woman to win the race since 1985.

Women are often more open to sharing their problems with friends and family. A problem shared is a problem halved and this is true when it comes to finances. Discussing your concerns or worries is not necessarily about having someone to solve the issue for you. However, the act of verbalising your fears or anxieties can help you work towards finding a resolution for yourself. The reassurance you feel when you realise you are not the only one struggling can often be the boost you need to persevere.

This Mother’s Day, let’s celebrate some of the less well recognised strengths that women possess. Embracing some of the behaviours that seem to come naturally to female athletes, may help us build happier, healthier financial lives.

Article by Catherine Robson. Published by The Sydney Morning Herald, May 10, 2018.