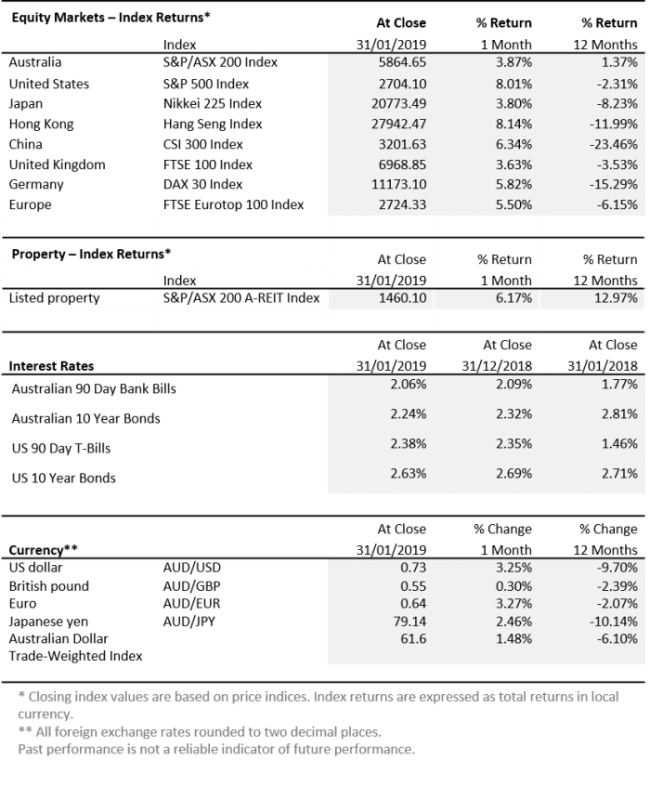 The start of 2019 has witnessed swings in sentiment and a shifting outlook for US Fed policy. Signs of slower global economic growth and weaker than expected inflation have caused central banks to reassess their view of monetary policy. Growth in Australia was slightly above-trend in 2018 but falls in residential property markets are negatively affecting sentiment and placing constraints on household spending.

The US Fed began the new year struggling to regain its balance after being wrongfooted by markets as it attempted to address concerns surrounding its current tightening path. At the mid-December FOMC meeting the Fed lifted rates as expected to 2.50% and, although Fed officials have since backtracked from their more hawkish comments, there are signs that the US economy has slowed from annual growth figures of 4.2% in the June quarter and 3.5% for the September quarter of 2018. However, talk of a possible recession would appear to be overblown—the Atlanta Fed’s GDPNow projection for the December quarter growth was 2.7% in early February, while commercial loans have lifted and January’s payrolls data were well ahead of expectations. The ISM New Orders index rebounded in January from 51.3 to 58.2, and new home sales rebounded strongly in November but remain down around 10% from their peak in late 2017. December’s CPI dropped 0.1 points to leave the annual rate at 1.9%, while wage growth slowed in January but still represents a 3.2% gain over the year. The standoff over congressional funding for a border wall continues, with President Trump and Congress agreeing to short-term arrangements to keep the government running, but an agreement is needed to secure funding past 15 February to avoid another shutdown.

Growth appeared to slow across Europe in December as political uncertainty and a confluence of one-off factors took their toll. German car makers continue to struggle to adjust to new emissions regulations, while France’s political system is being disrupted by the rolling gilets jaunes (yellow vest) protests. The IHS Markit Eurozone PMIs are consistent with GDP growth of 0.3% for the December quarter, which would be an improvement on September quarter growth of 0.2%, but the data point to a slowdown in activity in December. Growth is falling due to a range of factors, including the US-China trade war, Brexit, financial market volatility and slower global growth. The IFO Institute’s economic climate index for the first quarter of 2019 plunged in early February from 6.6 to -11.1 points, falling below zero for the first time since 2014. The Brexit issue was again thrown into a state of flux following the UK parliament’s rejection of Prime Minister May’s deal. May is forced to renegotiate with the EU to an reintroduce a revised deal as soon as possible, raising the stakes and the possibility of the UK falling out of the EU without a deal. Meanwhile, the Italian government and the EU have reached a deal on the 2019 budget, which would leave Italy with a budget deficit of 2.0% of GDP in 2020 (down from the 2.4% in its original plans) to be achieved by delaying some spending measures.

China is attempting to wean itself off its reliance on credit-fuelled investment spending, and with good reason given debt levels approaching 300% of GDP. However, given the additional threat of a trade war with the US and an increasingly cautious household sector, China appears to have reached the point where additional stimulus measures are required. In January Chinese authorities announced the fifth cut in the bank reserve requirement ratio for this cycle, freeing up potentially US $200 billion while also committing to a stimulus package centered on tax cuts for select industries. These measures follow tax cut for households and the planned record-high rail investment worth US $125 billion. The reason for the step up in policy is the ongoing weakness in activity, with January’s PMI numbers failing to recover after moving below the 50-point mark in December, indicating a contraction in activity and a sign that the trade war may finally be entering the data. The truce reached between China and the US at January’s G20 summit in Argentina was a welcome development, and negotiations since appear to indicate a reasonable chance of a deal, which is important for both countries as other sources of growth come under pressure.

Japan’s September quarter GDP growth was revised down to a contraction of 2.5% annualised from an initially reported fall of 1.2%. The main factor was a downward revision to business investment, which fell 10.6% during the quarter (a significantly greater fall than the initial estimated drop of 0.9%). The downturn has been linked to a string of natural disasters, including flooding in July, a typhoon in September, and an earthquake in Hokkaido, all of which have affected exports and especially tourism. If there is any good news it is that a rebound in business investment is likely to contribute to a recovery in the March quarter of 2019, but even a recovery could be vulnerable to the global slowdown. The rise in the sales tax from 8% to 10% is due to come into effect in October 2019, and while it might provide an initial boost in consumption it is likely to prove crippling to consumer demand and risks pushing the economy into recession. India’s central bank surprised markets with an interest rate cut—the first in 18 months—while also easing bank lending restrictions for non-banking finance companies and raising the limit on collateral-free farm loans. The move comes ahead of a general election due to be held between April and May.

Confidence in the Australian economy has taken a hit from the correction in house prices and a slowdown in global growth, both of which have led the Reserve Bank to reassess downside risks. Consumer spending has remained relatively robust despite the negative wealth effects of falling property prices, but this has been partly driven by a fall in the savings rate. Overall, GDP growth slightly above the trend rate of 2.75% has seen the unemployment rate decline from 5.5% at the start of 2018 to 5.0% in January 2019, but excess capacity remains, partly evidenced by the lack of any meaningful pick up in wage growth and inflation (indeed core inflation measures remain below the RBA’s target range). Employment growth remains strong, with 21,600 jobs added in December and 251,000 added over 2018, while job ads are consistent with reasonable growth going forward. Together with extremely accommodative monetary policy settings and a currency no longer constraining growth, these conditions would typically be associated with a favourable equity market backdrop. Of course, this ignores the risks posed by the excesses of the past decade and Australia’s sensitivity to China, which is undergoing both a structural and a cyclical slowdown.

The S&P/ASX 200 Index returned 3.9% in January as stocks recovered from a global selloff in December. In early February markets were able to digest the recommendations of the Royal Commission report into financial services misconduct, which provided a measured response to the system’s failings. Major financial services shares moved higher, but overall the sector remains beaten down having fallen 14.8% over the course of 2018. Energy (+11.5%) was the top performing sector in January, with large gains from Beach Energy (+33.8%), whose December quarter results held up well given seasonally low gas demand, and Worley Parsons (+21.5%), which inched closer to completing its $3.3 billion acquisition of US group Jacobs Engineering. The Information Technology sector (+9.3%) swiftly recouped losses sustained through the December quarter, driven by the major ‘WAAAX’ stocks including AfterPay Touch (28.3%), Appen (+24.4%) and Wisetech Global (+20.4%), which managed to claw back their already dizzying valuations. Communications (+7.9%) posted solid gains, with Telstra (+9.1%) attracting interest despite the risk of a further de-rating if its dividend is cut to 16c per share. The ASX 200 VIX, which measures implied volatility, fell from its recent high of 20.6 in December to end January at 14.1.

Global shares staged a comeback in January with hopes raised for a positive US earnings season and some backtracking from the Federal Reserve on its more hawkish comments. The US S&P 500 Index rallied 8.0% over January in Australian dollar terms and hit a five-day winning streak in the first week of February. In local currency terms the biggest gains came from Industrials (+11.4%), led by General Electric (+34.2%) and supported by a recovery in major airline shares, which have benefited from concerns over an oversupply of crude oil. Information Technology (+6.9%) shares managed to claw back December’s losses, with Facebook (+26.4%) beating revenue and earnings expectations for the quarter, while Apple (+5.5%) saw modest gains as investors looked beyond declining iPhone sales to strong growth in Apple services and other devices. Markets were mostly muted as President Trump delivered his State of the Union address, while signs of positive developments in the trade negotiations between the US and China helped bring some stability. The UK’s FTSE 100 Index rose 3.6% in January and continued to recover in February as investors remained hopeful that an exit deal will be made in time. Japan’s Nikkei 225 Index rose 3.8% in local currency terms and China’s CSI 300 Index gained 6.3% as Chinese authorities announced further monetary and fiscal stimulus to combat softer GDP.

The S&P/ASX 200 A-REIT Index returned 6.2% in January as the outlook for interest rate rises softened and bond market yields fell. While Australia offers one of the highest REIT market yields of 5.1%, the spread over 10-year bonds is slipping in comparison to other developed markets. Nevertheless, the 10% fall in the Australian dollar over calendar year 2018 has made prices considerably cheaper to foreign investors. The slowdown in residential markets has been driven in large part by the curtailment of bank lending, while the prospect of a change of federal government (and changes to property and tax regulations) is adding to the uncertainty. In terms of January’s performance, shopping centres were again the laggards, with Shopping Centres Australasia (-2.4%) down ahead of its half-year results, which came in largely as expected, while Vicinity Centres (+0.4%) was flat. Globally, the positive outlook is being underpinned by consistent demand, relatively low vacancy rates, and rental growth that is supporting earnings and dividends. US REITs rebounded from December’s falls, with the biggest gains coming from Warehouses (+15.2%), Shopping Centres (+14.2%) and Offices (+13.9%).

Fears of a ‘breakout’ in interest rates were allayed in January as slower global growth and softer inflation saw a resurgence in bond values and compression of yields. Global bonds measured by the Barclays Global Aggregate Index returned -2.0% in January in Australian dollar unhedged terms and 1.0% in hedged terms. Major developed market yields have been on a downward path since the end of the September quarter, largely driven by a flight to quality as equity volatility spooked markets and global data disappointed. The impact of the political landscape cannot be ignored either, with continuing tensions around trade policies and the US government shutdown adding to the angst in markets. The US 10-year Treasury yield fell from 2.69% to 2.63% in January, down from its recent highs of over 3.20% in November 2018, as the US Fed sought to reassure markets that it was not blindly committed to its tightening path. Money markets have pared back expectations on the number of rate rises and now expect the Fed to hit the pause button in 2019. Weak inflation figures in Europe saw the German 10-year Bund yield fall from 0.24% to 0.15% while the 5-year yield held at -0.32%. In Australia, the 10-year yield fell from 2.32% to 2.24%, down from its recent high of 2.76% in November.

The Australian dollar rose 3.3% in January against the US dollar and 1.5% in trade-weighted terms but came under pressure in February as the RBA cut its GDP growth forecasts, which markets already considered to be overly optimistic. Australia’s bulk commodity prices and the terms of trade have held up reasonably well, notwithstanding the uncertainty over global demand, while on a simple PPP basis, the Australian dollar is not far from its long-term average level. If the US Fed is forced to resume tightening in response to continued US growth momentum and wage growth, the Australian dollar will likely continue its downward path.