Do you want your children to learn about the stock market? Do these five things

From the MDs' Desk

Welcome to our 19th edition of Affinity Insights.

As we are now at the business end of the financial year, things are going to get even busier. The last couple of months have proved to be turbulent times in the market, with the Nasdaq moving more than 30%, while the Australian market moved only 10%. With the potential risk of high inflation, uncertainty around the Federal Reserve and interest rates, and the risk of potential stagflation, we await to see the outcome from the meeting of the Reserve Bank of Australia.

Following the positive feedback from last year, we hosted our first Market Update Webinar for the year and received great feedback. Thank you to all those who attended. We endeavour to host more insightful events in the near future.

We do hope you enjoy this issue of Affinity Insights, and we welcome any feedback or suggestions for future topics.

We are delighted to welcome Marina Korolik to the Affinity team in the role of Client Services, working alongside Rodney DeGabriele and Alison Warner.

Marina has completed a Bachelor’s Degree in Business, majoring in Financial Planning, as well as a Bachelor’s Degree in Education. Marina’s experiences both in the financial services and education industry has given her a wealth of practical knowledge that is integral to the everyday operations of Affinity Private Advisors.

We would like to welcome Marina to the team.

In our most recent market update, we discuss Government Bonds and why bonds can again play a role in diversified portfolios after suffering one of their biggest declines in decades.

Given how sticky inflation has been, central banks appear extremely committed to getting these inflationary pressures under control while a number of structural factors suggest inflation is unlikely to remain elevated in the decade ahead, particularly low potential economic growth and high global debt burdens. As a result, bonds should continue to provide portfolio diversification and reduce overall portfolio volatility when times are tough for equity markets.

Our latest Market Update is now available to view here.

We have updated our Financial Services Guide (FSG).

Below is an infographic which is updated monthly by the RBA, summarising macroeconomic and financial market trends in Australia. 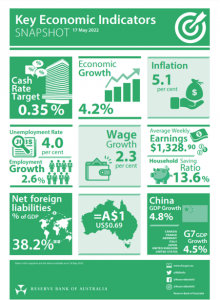 The lack of uniformity in the valuation of unlisted assets is exercising the minds of regulators worried about extreme volatility in markets.

It is a happy coincidence that Franklin Templeton’s 30 per cent write-down of its stake in Canva comes in the same month the prudential regulator put the heat on certain superannuation trustees to ensure valuations of unlisted assets reflect market conditions.

The bigger-picture context that links the two events is the widespread perception that unlisted assets are valued using a “black box” with processes that are both opaque and inconsistent.

The Australian Prudential Regulation Authority confirmed on Tuesday it had written this month to several super funds to remind them of the findings of the thematic review on unlisted asset valuation practices.

APRA expects to begin consulting on updated prudential guidance on investment governance and asset valuations later in the year.

The regulator’s review found that in some cases unlisted asset revaluation frameworks were inadequate, there was limited board engagement with valuations, and some super funds had an over-reliance on external parties, including fund managers and asset consultants. This month’s APRA letter said super funds needed to be “actively engaged with external investment managers to gain assurance that the methodology used for manager valuations remains appropriate and that the valuations are not potentially out of date given the extreme market conditions”.

There is no better place to find extreme market conditions than on the Nasdaq, where high-growth technology stocks have been smashed over the past six months. 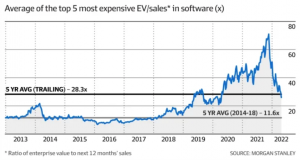 This provides the benchmark for Franklin Templeton’s assessment that Canva, which runs a global graphic design software platform, is worth $37 billion, or about 27 times its annual revenue run rate of $1.35 billion.

But the venture capitalists backing Canva are not putting their hands up to follow Franklin Templeton’s lead and write down their investment.

The $18 billion gulf between Franklin Templeton’s valuation and the valuation of the venture capitalists won’t be resolved until Canva lists on the Nasdaq exchange which could happen in the next 12 to 18 months.

Chanticleer wonders if APRA will now ask super funds that have invested money with the venture capitalists that have backed Canva to make inquiries about what the business is worth.

It is easy to forget that Canva’s $55 billion valuation released in September last year was based on a capital raising equivalent to less than 0.5 per cent of its total value.

APRA’s concern about the weaknesses in the processes used by super fund trustees to assess the valuation of unlisted assets arose following the COVID-19- induced panic in the share market in March 2020.

Others took advantage of the government’s super withdrawal option to cash out up to $20,000 in super at the bottom of the market.

Super funds that fail to keep their unlisted assets up to date are transferring value from those who remain in the fund to those who leave.

Unlisted assets in property and infrastructure have different characteristics from unlisted technology companies such as Canva.

Property and infrastructure are valued using discounted cash flows. The tricky issue for the valuation of these assets is the discount rate used.

The discount rate is at the discretion of the owner or manager of the asset, although the benchmark is the long-term bond yield, which has risen by about 50 per cent over the past year.

Someone with 20 years of experience on the investment committee of a large super fund tells Chanticleer the appropriate discount rate is about 3.8 per cent even though long-term bonds are trading at levels below this.

Of course, there is a significant difference between Canada’s defined benefit pension funds and Australia’s accumulation funds. The Canadians can ride out market volatility because they do not have to offer daily liquidity.

Australia’s super funds must manage for daily liquidity while holding and increasing the proportion of assets for the long term in unlisted form.

This article was published in The Australian Financial Review, April 26, 2022

New rules helping older Australian's get more into their super

Recent changes to superannuation laws could be a game changer for retirement planning, with a number of seemingly small but significant adjustments.

The main benefit of the changes in the bill passed by Parliament in early February is that they reduce the ageism that has been built into the system over the past decade.

The various limits and caps on super contributions, introduced by successive governments, have created an environment where people need more time to build up their balances, and therefore should ideally start making additional contributions in their 40s or even their 30s.

But this is usually an age when people are focused on other financial demands such as paying off their mortgage or managing school fees, and few can make additional super contributions.

Those approaching retirement, on the other hand, may have additional funds to put into super for their later years but have been hamstrung by the caps and limitations. Governments have made it much harder for people to build up their super balances to a comfortable level.

The good news is that the latest changes give people scope to focus on their super when they are more likely to have the funds to contribute.

One of the key changes is that the age where people can make non-concessional (i.e. not tax-deductible) super contributions without having to meet a work test has been increased. It has been lifted to apply to those younger than 75, up from 67 years old. The new rule comes into effect from July 1 and means that people do not need to prove they are gainfully employed to make non-concessional super contributions of $110,000 a year, for an extra eight years, as long as their total super balance is under $1.7 million.

As a further concession, people older than 67 but under 75 will also have the opportunity to triple their contribution to super, by taking advantage of the three year “bring forward” provision. For instance, a 74-year-old who has not used the bring-forward provision in the past two years can make a $330,000 non-concessional contribution. This is still subject to the $1.7 million total super balance cap, but for many people will be a welcome opportunity to top up their super, including those who may have seen their super balance drop over the past few years in volatile markets.

This may be very helpful for those who receive an inheritance or sell an asset. Rather than invest the proceeds personally, it may be possible to simply add to super where it is probably better invested and more tax effective.

Another significant change is that the downsizer contribution of $300,000 a person when selling the family home will be available to people from 60 years old, down from 65, from July 1. This is another big step for retirement planning as it gives people more time and opportunity to build up super balances as they get closer to retirement.

Both these initiatives will also provide an opportunity to even up a couple’s super balances. For instance, one partner can draw down on their super from 65 regardless of their work status, and perhaps have their spouse contribute it to their super. Super balances can also be replenished later from an asset sale or inheritance.

Overall, any changes that make super a more attractive and accessible option are a good thing. These recent changes are a welcome move by the government to help people save more for their retirement within the well-established super environment.

This article was published in The Australian Financial Review, March 1, 2022.

Mrs Carol Matthews is a client of ours, and on Australia Day, this year, was awarded the Medal (OAM) of the Order of Australia in the General Division for service to the community mental health.

In 2009, Carol Matthews home was destroyed and her 22-year-old son, Sam, was killed in the Black Saturday bushfires. Since then, Carol has advocated for emotional preparedness to be included in bushfire preparation. She was the lead litigant in the biggest class-action in Australian history, securing a record $500 million settlement for bushfire survivors.

We wish to Congratulate Carol on such an achievement.

You can hear more about Carol and her work here.