Pre-election sweeteners are the focus of the 2019-20 Federal Budget. With superannuation left largely untouched, the Government focused on further personal income tax cuts.

Click play below to watch a short video commentary of the announcements.

The key changes proposed for SMSFs and superannuation are:

From July 1 2020, Australians aged 65 and 66 will now be able to make voluntary superannuation contributions, both concessional and non-concessional, without meeting the Work Test. Previously, this was only available to individuals below 65.

This also includes extending access to the bring-forward arrangements to individuals aged 65 and 66 which allows individuals to make three years’ worth of non-concessional contributions to their super in a single year.

The Government has also increased the age limit for spouse contributions from 69 to 74. Currently, those aged 70 years and over cannot receive contributions made by another person on their behalf.

The Work-Test-Exemption which allows individuals a further year to voluntarily contribute to superannuation after they have finished working will still apply to individuals from 67 to 74.

The Government will streamline administrative requirements for the calculation of exempt current pension income (ECPI).

The Government will allow superannuation fund trustees with interests in both the accumulation and retirement phases during an income year to choose their preferred method of calculating ECPI.

This change will reduce unnecessary red-tape for SMSFs in pension phase.

The Government will provide $19.3 million over three years from 2020-21 to the Australian Taxation Office (ATO) to send electronic requests to superannuation funds for the release of money required under a number of superannuation arrangements. This is an improvement on the current process which includes physical documentation.

The start date of SMSF rollovers in SuperStream will be delayed until 31 March 2021 to coincide with the expansion of the SuperStream.

The Government will lower taxes for individuals by building on its legislated Personal Income Tax Plan announced in the 2018-19 Budget. The changes to the plan will provide immediate relief to low- and middle-income earners. Under the changes, the reduction in tax provided by the low and middle income tax offset will increase from a maximum amount of $530 to $1,080 per annum and the base amount will increase from $200 to $255 per annum for the 2018-19, 2019-20, 2020-21 and 2021-22 income years.

In 2024-25, the 37 per cent tax bracket will be abolished under the Government’s already legislated changes.

The changes can be summarised as follows: 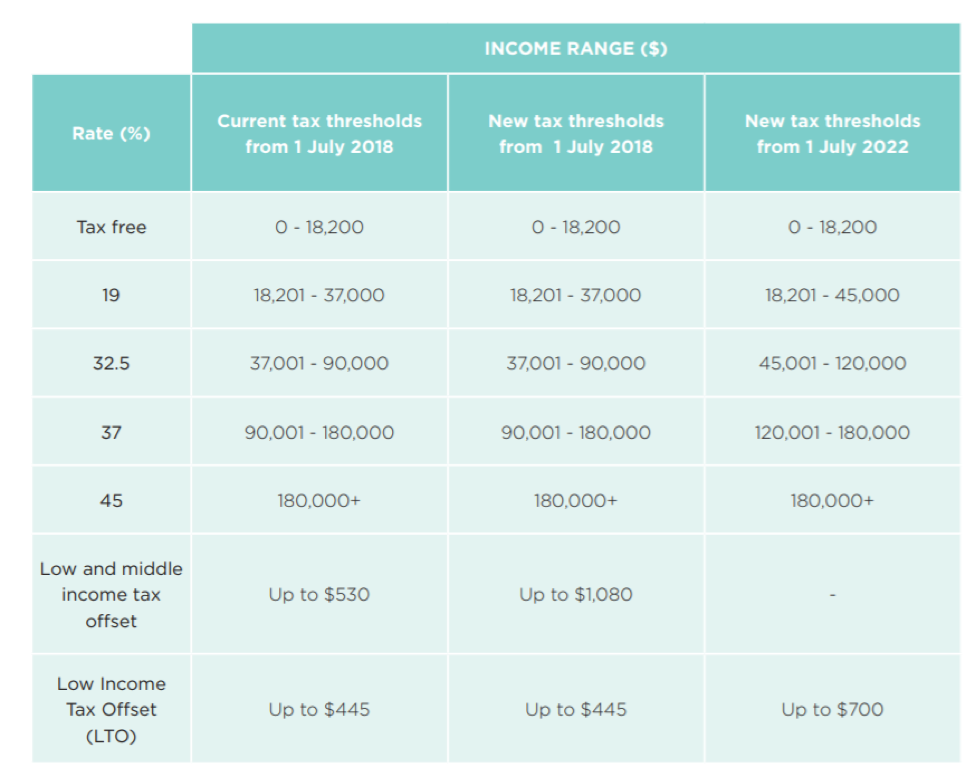