The art of perception – changing your life by seeing more clearly 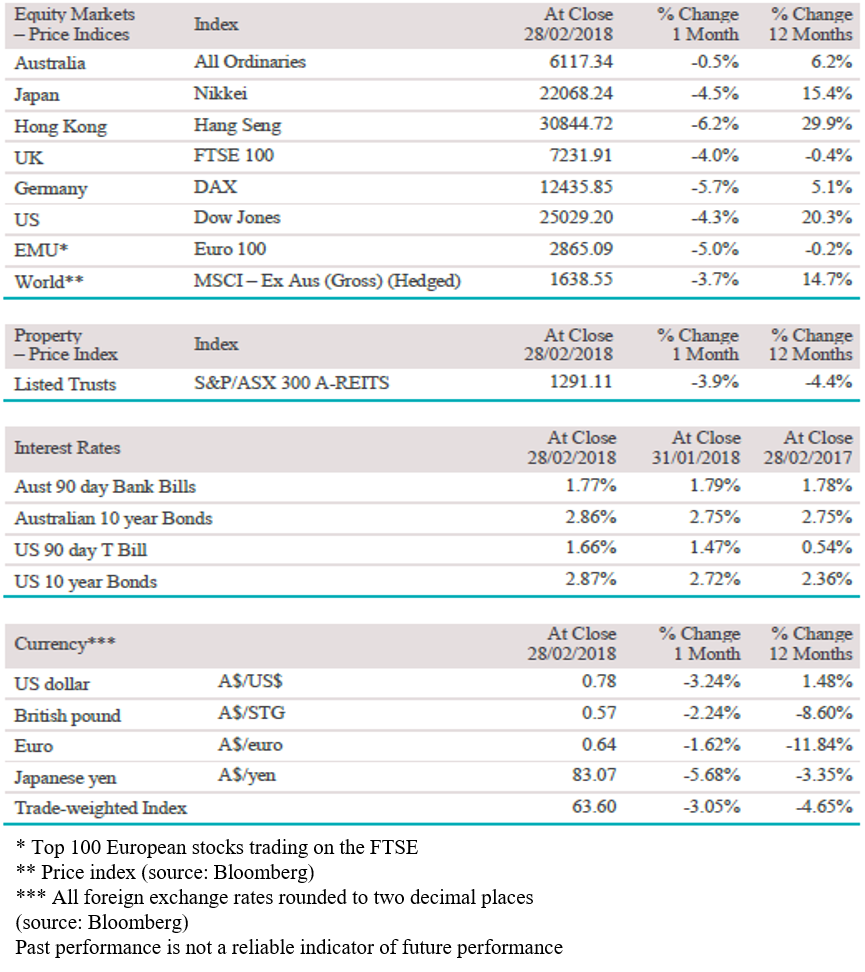 The market’s attention has turned to the outlook for inflation, and the potential for central banks to respond with tighter monetary policy. The resultant rise in bond yields, together with a reassessment of equity market valuations, gave way to February’s market pullback. Economic indicators are robust, but anticipated interest rate moves are a key determinant for markets.

With the US unemployment rate falling to 17-year lows, the expectation of both policymakers and investors is that wages growth will eventually pick up, and with it inflation. January data provided evidence that the US economy may be starting to run up against some capacity constraints. Average hourly earnings were up 2.9% in January year-on-year, representing the biggest rise in more than eight years but still less than the 3.5–4.0% associated with strong economic growth. Further, the January CPI figure came in higher than expected, rising 0.3% in core terms (1.8% year-on-year). Following the successful passage of President Trump’s tax reform package, the White House is now turning its attention to the renegotiation of the North American Free Trade Agreement (NAFTA). Trump alarmed NAFTA partners by explicitly tying steel and aluminium tariffs to a deal—a gambit that led to the resignation of top economic adviser Gary Cohn. While again raising the spectre of a trade war and potential inflation, markets are so far keeping their cool. Trump is also facing resistance from fellow Republicans in Congress who believe tariffs would undermine efforts to boost growth.

Growth in the eurozone continues to surprise on the upside, with GDP rising 0.6% in the December quarter, bringing year-on-year growth to 2.7% (which is significantly higher than what economists were predicting at the start of 2017). It is even possible that the 0.6% figure may be revised higher in line with recent trend revisions. The IHS Markit Eurozone PMI reached its highest level since June 2006, with a broad-based upturn led by France and Germany. If maintained at current levels, the eurozone is likely to achieve growth of 1% in the first quarter of 2018. The survey suggests that price pressures are intensifying and, together with rising oil prices, mean consumer price inflation is expected to pick up. Relatively high rates of growth, coupled with low unemployment, is leading to a pick-up in wages, although predominately in the north, evidenced by reports of Germany’s IG Metall Union winning a 28-hour working week and a 4.3% pay rise. After months of deadlock, a new ‘grand coalition’ between Merkel’s CDU and the centre-left Social Democrats (SPD) has finally been agreed, with Merkel handed a fourth term as chancellor. In Italy, no party achieved the necessary 40% to form government, with centre-right parties and the anti-establishment Five Star Movement claiming the most votes.

China’s February PMI readings were mixed, with the official index down to 50.3 from 51.3 and missing expectations, while the Caixin PMI moved slightly higher from 51.5 to 51.6. Industrial production growth in December was 6.2%, which narrowly beat consensus, while private investment was subdued at 7.2% and retail sales growth eased to 9.4% from 10.2%. Premier Li Keqiang announced a growth target of 6.5% for the coming year, which remains unchanged from 2017, despite the Chinese economy recording growth of 6.9%. Although credit growth slowed throughout 2017 as the authorities nudged up interest rates and tightened financial conditions in the shadow banking sector, new loans surged in January. Meanwhile, exports rose 11% and imports 37% in January, most likely the result of stockpiling ahead of the longer Chinese Lunar New Year. The property sector appears to be slowing, reflecting tighter financial conditions. Producer prices continue to outpace consumer prices, although the annual rate has dropped back to 4.3% year-on-year, while the CPI fell to 1.5% year-on-year in January.

Japanese GDP rose by a disappointing 0.1% in the December quarter, slowing from a 0.6% rise in the previous quarter, however this is the eighth consecutive quarter of growth. On a positive note, the Nikkei Japan Services PMI indicates increased strength in the manufacturing sector, with new business opportunities increasing at the fastest rate in four years. The unemployment rate ticked higher to 2.8% in December, slightly higher on November’s 2.7% but still trending down. Despite tighter labour market conditions, wages are still constrained, with total cash earnings rising a meagre 0.7% over the year to December, having failed to break out of the -1% to 1% range for some years. Bank of Japan governor Haruhiko Kuroda was renominated for another five-year term, signalling Prime Minister Abe’s renewed commitment to pushing up inflation, which to date has struggled to rise much above zero.

The outlook for Australia continues to improve, with unemployment expected to approach 5% over coming years and wages growth to pick up modestly. Australia’s labour market continues to tighten, with 16,000 seasonally adjusted jobs added in January. The past 12 months have seen the participation rate grow steadily, from 64.8% to 65.6% in trend terms—close to historic highs and back to pre-GFC levels. From a monetary policy perspective, this outlook suggests that while the next move in cash rates is likely to be up, there is little urgency. The RBA is mindful that wages growth remains low, housing activity appears to be rolling over, and the Australian dollar is still close to 80 US cents, which is probably too high for the Bank’s liking. In its March statement, the RBA had little to say about recent market turmoil, noting only that, “market volatility has increased from the very low levels of last year.” Business conditions are solid across all major industry groups, with construction the standout, but retail is the one exception—Australian retailers experienced a disappointing start to the year, with turnover rising a modest 0.1% in January, missing the expected 0.4% rebound.

The S&P/ASX 200 Accumulation Index rose 0.4% in February, with losses during the start of the month fully regained on a total return basis. In price terms, the index hit a high of 6121 points early in February, bottoming at 5821 points (a fall of 4.9%), and then recovering to end the month at 6016 points (90% recovered from the start of the month). February’s gains were driven by the health care sector (+7.0%), with CSL (+11.4%) the top performer on the back of record HY profit and a lift in its full-year guidance. Consumer staples (+2.1%) shares were also higher, with strong gains from market darling A2 Milk Co (+47.5%) following a big earnings beat, while Woolworths (+2.5%) enjoyed a solid earnings performance, including a 3.8% rise in sales. The telecommunications sector (-6.2%) was the worst performing for the month, with Telstra (-4.4%) still out of favour since reducing its dividend, and Vocus Group (-18.1%) hit hard following a downgrade to its FY18 guidance and the departure of CEO Geoff Horth. The energy sector (-3.8%) also came under pressure, with Whitehaven Coal (-8.9%) battling higher-than-expected operating costs, albeit with the offset of a buoyant coal price. 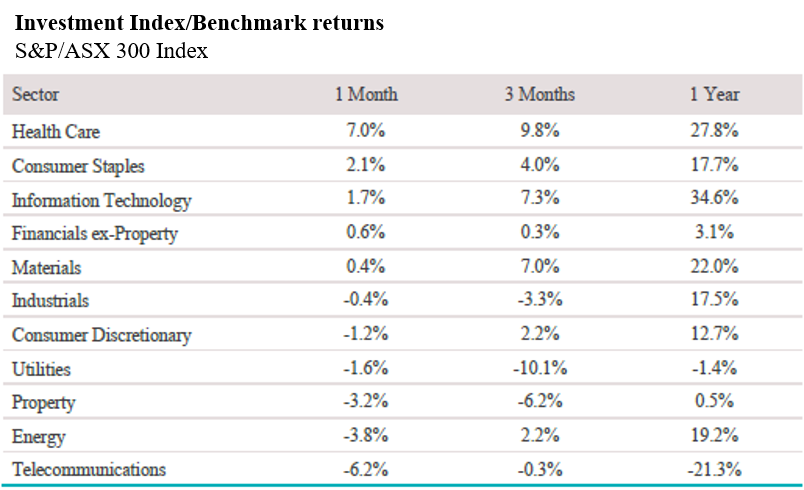 The S&P/ASX 300 A-REIT Accumulation Index fell 3.2% in February, with higher yields bringing the sector under pressure. Shopping centre giant Vicinity Centres (-7.8%) was hardest hit after reporting a fall in H1 profit amid challenging retail conditions. News from major tenant RFG (whose brands include Donut King, Gloria Jeans and Crust Gourmet Pizzas) that it would be forced to close between 160 and 200 stores did not help. After a frustrating few months, National Storage REIT (+2.0%) gained in February, announcing a 22% rise in storage revenue and a 152% rise in profit driven by fair value adjustments to its portfolio. Globally, the EPRA/NAREIT Developed Market Index (AUD hedged) fell 6.4% in February, highlighting the relative tenacity of domestic REITs. US REITs, measured by the MSCI US REIT Index, tumbled 7.9% as yields spiked.

Globally, the Bloomberg Barclays Global Aggregate Bond Index (AUD hedged) returned -0.23% as global yields pushed higher. The five-year breakeven inflation rate—a market-derived gauge of expected inflation—reached its highest point in over five years, reflecting the market’s focus on wages and consumer prices. The US 10-year treasury yield underwent significant expansion, rising from 2.72% to 2.86%. The Japanese 10-year yield fell from 0.09% to 0.05%, still hovering above the Bank of Japan’s zero yield target. The German 10-year yield fell from 0.70% to 0.65%, while the 5-year yield fell from 0.10% to 0.02%, but still managing to hold above zero.

The Australian dollar fell 3.2% against the US dollar in February and 3.1% on a trade-weighted basis, in part reflecting a vanishing yield premium, with the US Fed expected to hike rates, possibly as early as March. The Australian dollar ended the month at 0.78 against the US dollar. The US Dollar Index rose 1.7% in February but still appears to be in a downward trend. Concerns over the rising US budget and current account deficits may have contributed to US dollar falls over recent months.

The information contained in this Market Update is current as at 08/03/2018 and is prepared by GWM Adviser Services Limited ABN 96 002 071749 trading as ThreeSixty Research, registered office 105-153 Miller Street North Sydney NSW 2060. This company is a member of the National group of companies.