It pays to think about your time as money 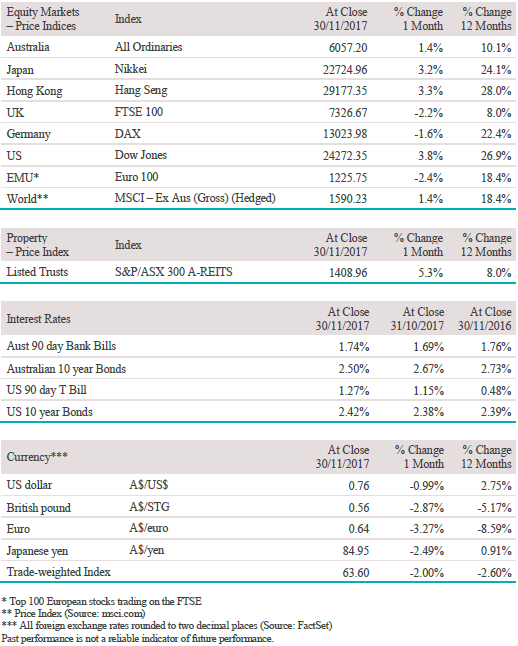 Economic news over the past month has confirmed that the major economies are continuing to enjoy relatively healthy growth in the second half of 2017 with falling unemployment and robust business and consumer sentiment surveys suggesting that current economic conditions can continue into next year.

In the United States, separate tax reform bills were passed in both the House of Representatives and Senate, paving the way for tax cuts for both companies and individuals assuming that the two bills can be reconciled. For major companies, the headline tax rate is expected to fall from 35% to 20% and, all else being equal, this should boost corporate earnings, but risks saddling the economy with higher levels of government debt if the tax cuts don’t stimulate higher economic activity. With full employment and strong economic conditions and the likely fiscal stimulus from tax cuts, the US Federal Reserve under new Chairman, Jerome Powell, is likely to continue to normalise interest rates over the next two to three years. Higher short term US interest rates and the repatriation of offshore cash holdings by US multinational companies, due to proposed tax changes, is also likely to be supportive for the US Dollar given a significant portion of the US$2.6 trillion in estimated cash holdings are held in foreign currencies.

In the Eurozone, the economy continues to perform strongly with retail sales growing 3.7% year-on-year, reflecting recent strong consumer sentiment readings. The purchasing manager surveys for the Eurozone have also continued to strengthen with the composite PMI index at a new cyclical high in November suggesting that the Eurozone economy should be growing at about a 3.5% year-on-year, higher than last quarter’s 2.5% growth rate. Manufacturing activity has been particularly strong with the November manufacturing PMI at 60.1, which was only the second time in the 20-year survey’s history that more than 60 has been recorded.

In Japan, the preliminary estimate of quarterly real GDP growth slowed to 0.3%, marginally below expectations. This was the seventh consecutive positive quarter for growth and was enough to boost annual growth from 1.4% to 1.7%, which is above the Bank of Japan’s estimate of potential growth (of just 0.5-1.0%). However, even though the unemployment rate remained at a 23-year low of 2.8% in October, Japanese consumers are reluctant to spend with core household spending down 0.6% year-on-year. The weak consumer spending has seen the Bank of Japan’s new preferred core measure of inflation – which excludes the prices of fresh food and energy – rise only 0.2% year-on-year in October, well below their 2% target rate.

In Australia, the economy grew slightly less than expected, expanding 0.6% in the September quarter with household consumption growth particularly weak. This was likely linked with the weak wages growth which rose only 0.5% over the quarter despite the increase in the minimum wage in July. However, the economy continues to generate strong jobs growth and with business conditions at elevated levels the robust employment conditions should continue into next year.

The telecommunication sector underperformed (-1.6%), in spite of the performance of Vocus and TPG, while the heavyweight sector of financials was unchanged for the month. The weakness in telecommunications was solely due to Telstra being down 3.1% while National Australia Bank (-6.5%), ANZ Banking Group (-2.3%) and Westpac Banking Group (-1.8%) all weighed on the broader market. Banks suffered due to a combination of weak results and a banking Royal Commission announced on the last day of the month. 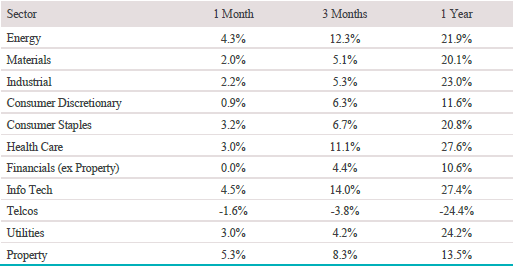 The MSCI World ex-Australia Index (in local currency terms) returned 1.6% in November, however, a decline in the Australian Dollar meant the index rose 3.3% in Australian Dollar terms. Every sector except materials was higher over the month with materials shares posting a small loss of 0.1% while the best performing sector was energy, which rose 3.0% helped by the oil price which rose almost 6% due to the OPEC and Russian agreement to extend oil production cuts to the end of 2018. Information technology shares, which are less likely to benefit from the US tax cuts, rose only 1.0% in November although they remain 40% higher year-on-year.

Australian bonds returned of 0.87% over the month as government bond yields fell in Australia due to lower-than-expected wages growth data and commentary from RBA Governor, Philip Lowe, who suggested interest rate rises may be at least a year away. Two-year Australian Commonwealth Government bond yields fell from 1.83% to 1.76% per annum (which is now lower than the US equivalent yield of 1.79% per annum) and the ten-year bond yield fell from 2.68% to 2.52% per annum resulting in a flatter Australian yield curve.

Internationally, the Bloomberg Barclays Global Aggregate Bond Index (A$ hedged) returned 0.19% as yield curves flattened in the United States, United Kingdom and Germany with rises of 6-19 basis points in two-year yields but little movement in longer term yields. While yield curve flattening can often signal greater chances of a recession, in this case the rises are mainly driven by increased chances of short term interest rate rises from central banks in Europe and North America.

The information contained in this Market Update is current as at 11/12/2017 and is prepared by GWM Adviser Services Limited ABN 96 002 071749 trading as ThreeSixty Research, registered office 105-153 Miller Street North Sydney NSW 2060. This company is a member of the National group of companies.