Protect your children against the things you can’t control

Dr Kelly Rogers is an expert in advanced microscopy, establishing the Centre of Dynamic Imaging at the Walter And Eliza Hall Institute (WEHI) in 2009. Now Head of the Centre, Kelly’s lab works with cutting edge imaging techniques that provide 3-dimensional view of biological specimens, as they change in time during development and in the course of a disease. Her work has also appeared in over 30 publications on advanced microscopy.

In this week’s Success Story, Kelly talks with Catherine Robson about the challenges of her early days at Institut Pasteur in Paris, how WEHI supports their scientists in balancing family life and why images from her lab have been transformed into a popular annual art exhibition.

Completing her undergraduate degree in biology and chemistry at Deakin University, Kelly became fascinated with synaptic connectivity, and what helps it to function during her PhD at Griffith University.

“Mostly I was interested in neurons in the brain and connectivity. I wanted to understand at the level of synaptic connections those kinds of molecular interactions that were occurring so I started looking for a position somewhere in the world that I could study precisely that”.

She found just the position at the Institut Pasteur in Paris, received a fellowship and packed up her life in Australia to head to France. At the time she knew very little French.

“I think I learnt how to count to ten, what the colours were and how to ask for a baguette and coffee” she laughs. 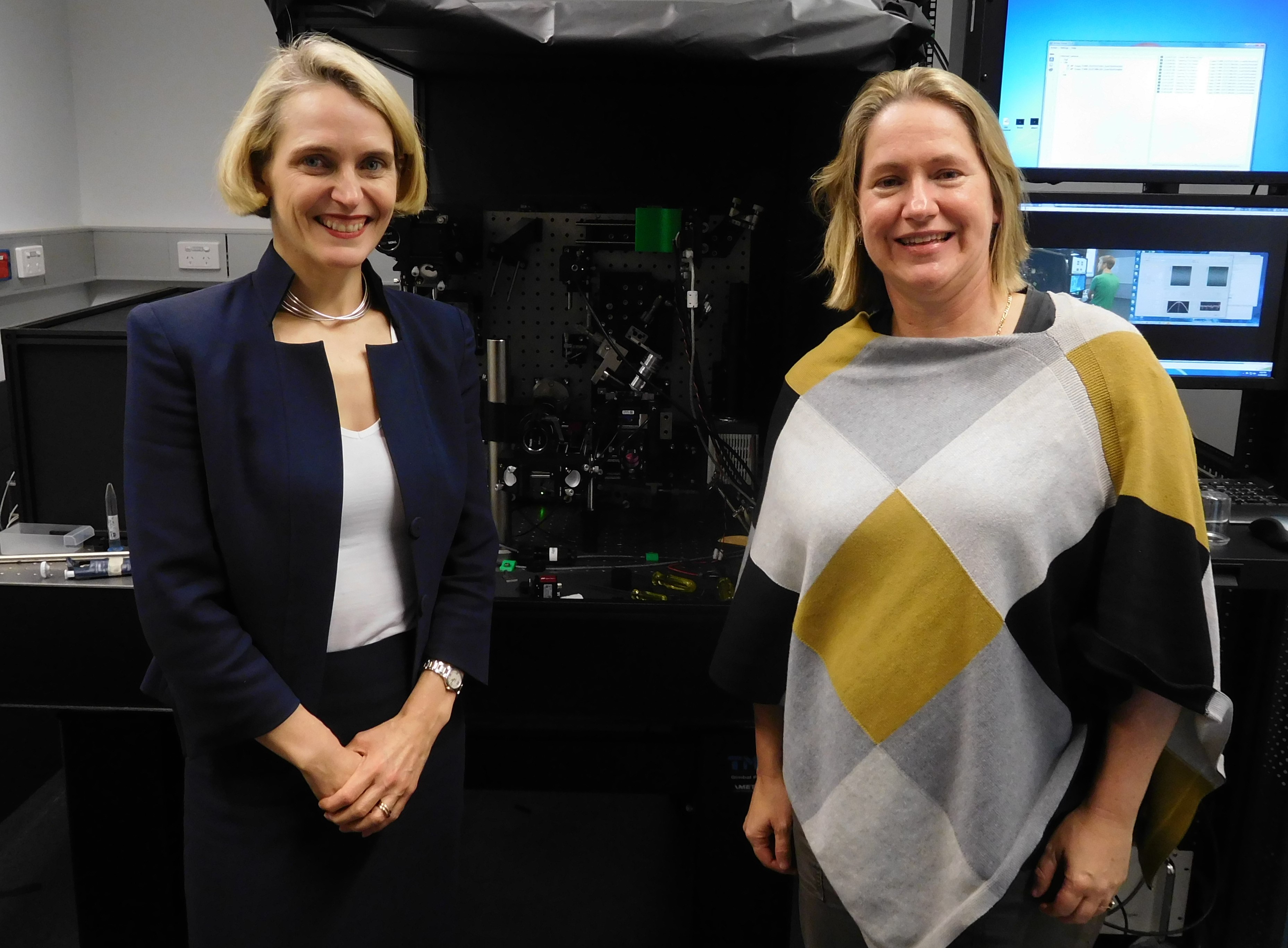 Away from her support network, operating in a lab environment with an unfamiliar language while working 7 days a week made the early transition incredibly daunting, but it was worth every challenge.

“There was a Nobel Laureate who was still linked to our laboratory who I would see each day when I would arrive at the Institute so for me, that was a very important moment in my life. To go to such a fantastic institute like that was an amazing opportunity” says Kelly.

During her post-doctoral studies Kelly was developing imaging methods and after seven years in France, she accepted the role of establishing an Imaging Laboratory at WEHI, landing her back on Aussie soil.

“What I love about imaging is this ability to see biology. Biology is three dimensional and it’s always changing in time and it’s a very diverse area. At WEHI we’re working on things like cancers and immune disorders and infectious diseases” says Kelly.

“I think it’s very exciting to be able to use new technologies that do provide a window into looking at both structure and function of looking at different biological models and being able to see things. Seeing is believing” she laughs.

Kelly had also been keen to return to Australia to start a family and was delighted to discover WEHI are extremely supportive of women keeping up with their professional career while raising children.

“They’re created so many initiatives to support women in science. There are initiatives to give women and men opportunities to bring young children into work, they provide a room where young children can go if they were working on their computer and need to be nearby their labs. They provide support to female scientists when they go on maternity leave, they might provide a research assistant to help female lab heads or senior postdoctoral scientists” she says.

Kelly and her team’s work isn’t just cutting edge science, it’s also beautiful. The Art Of Science exhibition, a collection of stunning images captured and created by WEHI scientists in the course of their research is also helping the public to see and believe what really goes on underneath our skin.

“The idea is to show the public how beautiful those images really are, to give them some view into what biology looks like. What different organs inside of our body look like” says Kelly.

“Giving the public that kind of opportunity to really see at that level certainly helps them appreciate what we do and why microscopy, for example, is such an important technology for the biomedical sciences”.

What advice does this expert in microscopy with an impressive career have to offer young scientists starting out?

“One of the things I usually tell my students is; it’s important to be passionate about what it is you’re studying because science requires a lot of perseverance, a lot of commitment” says Kelly.

Starting as you mean to go on with effort and consistency is also important.

“If you’re going to do an experiment, or going to start a project, don’t start anything unless you’re prepared to do them well. Sometimes people can waste a bit of time if they’re not putting the effort at the start” she says.