From the MD's Desk

As the year draws to a close, we reflect on our achievements throughout the year, and look forward to spending time with family and friends across the holiday season.  We wish you all the warmest wishes for a joyous season and a happy and healthy New Year. We would like to thank you for all your support during 2018 and look forward to working with you next year.

We were thrilled by the support for our recent lunch event held by the Resilience Project founder Hugh Van Cuylenburg. Hugh delved deeper into what the Resilience Project offers schools and discussed the exciting new research being undertaken by the University of Melbourne, evaluating the impact of the project in Australian schools.

Lastly, we would like to thank our talented client Ede Horton who has generously allowed us to display some of her beautiful glass pieces in our office.

We do hope you like this issue of Affinity Insights, and we welcome any feedback or suggestions for future topics.

We recently held our End of Year Function, at our new home at 333 Collins Street under the Dome. We were able to celebrate a successful year and the festive season with delicious canapes and drinks.

Thank you to all the individuals who made the night a success, especially Joseph and Lori London and Craig and Maria Thomson, who helped supply gifts and a selection of wines for the evening.  We would also like to thank all the clients and service providers who attended.

Wendy Lam joins the Affinity  team as an Associate. Wendy has worked in financial services since 2013, working for large multinational finance companies, as well as independent financial service firms.

Wendy understands the importance of education, especially in the finance industry, having completed a Master of Finance, Bachelor of Business (Accounting) and a Diploma of Financial Planning.

When not working, Wendy enjoys testing out new and exciting restaurants around Melbourne and enjoys Sunday walks with her dog. Wendy is passionate about providing exceptional client service and is looking forward to meeting the Affinity clients across the coming months.

We would like to welcome Wendy to our team and wish her all the best.

Lunch with the Resilience Project Founder

Thank you to all those who attended the Resilience Project Lunch with founder Hugh Van Cuylenburg, we hope that you found the lunch valuable. Hugh begun working in education over 15 year ago, however the highlight of his teaching career came when he spent a year in the far north of India, where he discovered resilience in its purest form.

Hugh discussed what the ‘The Resilience Project’ offers schools and informed attendees about exciting new research being undertaken by the University of Melbourne, in a three-year research project that aims to evaluate the impact of the program in Australian Schools.

We would like to thank Hugh for taking time out of his day and speaking candidly about his experiences. If you are interested in getting in touch with the team at The Resilience Project, to find out more about the work that they are doing Ben Waterman can be contacted on 0413 840 048 or ben@theresilienceproject.com.au.

We would like to thank our talented client Ede Horton, for generously allowing us to display a few of her beautiful glass pieces. Ede’s work is represented in many prestigious collections including Parliament House in Canberra, the Jewish Museum of Australia, Nishida Museum in Toyama, Ebeltoft Museum in Denmark, Queensland Art Gallery and several regional galleries.

Ede latest glass works focus on the exploration of relationships and the interconnectedness of humanity. Ede’s portraits portray the complexities of the human condition and intimately reflect each individual’s character. Within the fragile medium of glass, Ede pairs down the form, each layer revealing its purest structure and detail, to expose the person within.

All of Ede’s wonderful pieces displayed in our office are available for purchase.

The financials sector has typically provided strong dividend yields and formed a core part of Australian investor portfolios. However, the sector has significantly underperformed the wider market through 2018. Given this, it is appropriate to analyse the 2019 sector outlook.

Table 1 illustrates the extent of underperformance of the financials sector. 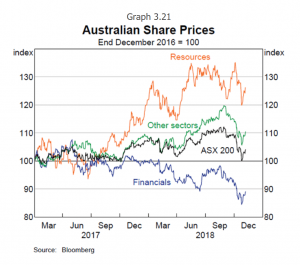 You can read George’s Research Note via the link below.