There’s never been a better time to be an investor 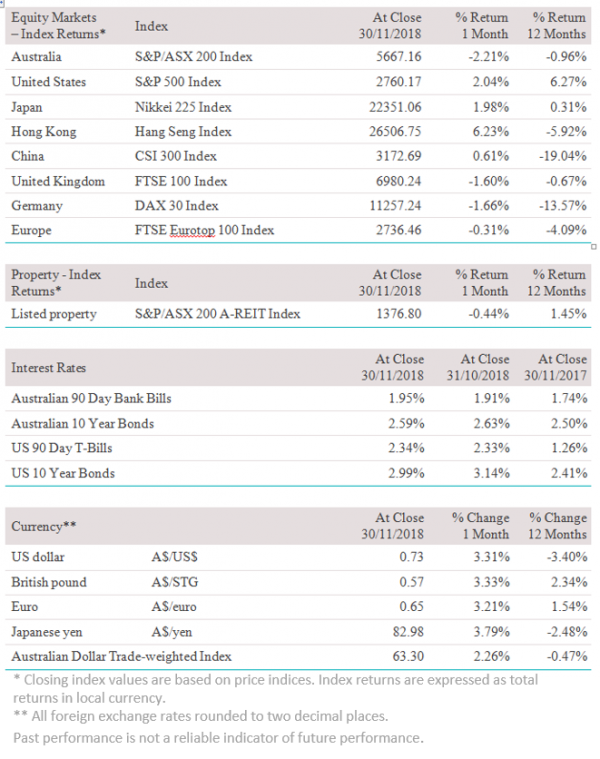 The global economic backdrop continues to deteriorate with risks tilted to the downside. US growth appears to be slowing from the rapid pace seen in the first half of 2018, China’s policy response to its economic slowdown has so far been muted, while the German and Japanese economies both contracted in the September quarter. With the US Fed still in tightening mode, hopes for keeping the economy on a solid footing require a deal with China on trade.

At least for the near-term, the US growth story appears positive, with broad-based momentum supported by fiscal policy measures and robust consumer spending. Wage growth broke above 3% year-on-year in November and may squeeze higher as labour market conditions continue to tighten. However, the US economy is likely to face headwinds from the lagged effects of interest rate tightening and fading fiscal stimulus, as well as a stronger US dollar which threatens to put a brake on activity. US September quarter GDP grew by an annualised 3.5% according to November’s second estimate, in line with October’s advance estimate and economists’ expectations. After-tax corporate profits grew 3.3% after rising at a 2.1% pace in the June quarter, while consumer spending was weaker than expected in the September quarter, revised down from 4.0% to 3.6% but still one of the key drivers of economic growth. Housing starts have fallen from an annual pace of 1.3 to 1.2 million over the year, but sales of new homes have dropped 13%, while the NAHB builder sentiment index declined noticeably in November to its lowest level in two years. In the meantime, trade tensions continue to impact confidence. President Trump has threatened to impose tariffs on almost all Chinese exports to the US and to ramp up the rate (from 10%) to 25%. Whether reduced options for stimulus force the Trump administration into a deal on trade with China remains to be seen.

Political risk is rising in Italy as the European Commission rejected the government’s draft budget, with the Commission affirming there was “no alternative” but to demand changes as the planned increased deficit broke EU fiscal rules and previous commitments. In the UK, the Bank of England warned that a disorderly exit from the EU could result in a decline in economic output of up to 8.0% in the first year and a rise in the unemployment rate to 7.5% under a worst-case scenario. Eurozone GDP growth is disappointing, rising 0.2% in the September quarter according to November’s estimate and well down on the expected 0.4% growth. In Germany, GDP actually contracted by 0.2% after growing 0.5% in the previous quarter, representing the first fall in three years as new emissions tests resulted in a cut in car production. Carmakers have slowed production until they clear a backlog of new vehicles due to the need to prove the new emissions standards are being met. The IHS Markit Eurozone Composite PMI suggests the slowdown in growth is continuing through the start of the December quarter, with an export slowdown linked to rising trade tensions, growing political risks and tightening financial conditions. The German Council of Economic Experts cut its forecast for growth this year to 1.6% due to carmaker woes and weaker manufacturing sales, especially to China.

The Chinese economy continues to show signs of slower growth, although the authorities have recently begun stepping up stimulus measures. The September quarter GDP growth result of 6.5%, down from 6.7%, was the slowest since the Global Financial Crisis, while PMI readings for the manufacturing sector are at levels last seen in mid-2016 when China was emerging from a period of strong capital outflows, weak property markets, and financial market instability. Restricting local governments’ access to credit has led to a major slump in infrastructure investment. State-owned enterprise investment growth has slowed to 1.8%, while investment in electricity and power production has contracted by 9.6% over the year. Retail sales have slowed through 2018, reaching 8.6% in October, or around 6.0% in real terms. The phasing out of preferential taxes on automobiles has seen a sharp drop in auto sales. In response, the authorities have approved tax cuts to take effect in January. For now, the stimulus put in place is relatively modest, but more could be forthcoming if the trade war continues to escalate. So far, Chinese exports have managed to hold up, but should US tariffs be increased to 25% across a wider range of goods, growth will come under increasing pressure in 2019.

As feared, Japan’s GDP contracted by 0.3% in the September quarter or by an annualised 1.3%, although it is worth noting that the flash estimate is often significantly revised. Public investment subtracted 0.4 percentage points and negative contributions from consumption, net exports, and inventories subtracted 0.3 percentage points. GDP may also have been adversely affected by natural disasters in September, including a typhoon and an earthquake. Japan’s services PMI indicates that the sector continues to grow, with a rise in incoming work boosting employment, while price data indicate a persistence of elevated cost pressures. Unemployment rose unexpectedly in October from 2.3% to 2.4%, while the job to applicant ratio slipped from 1.64 to 1.62, indicating a loss in labour market momentum. Nationwide core inflation rose 1.0% in October on the previous year, with over half the gain due to energy prices, making the Bank of Japan’s task even more arduous. India’s economy underwent a step change in the September quarter, with GDP growth slowing from 8.2% to 7.1%. The results come in the wake of a liquidity crunch that has hit India’s Non-Bank Financial Companies (NBFCs), which threatens to escalate into a payment default crisis for India’s SMEs.

The housing market continues to dominate the headlines in Australia. House prices are down 7.8% in Sydney and 5.2% in Melbourne over the past year, and lending to investors and ‘upgraders’ has slumped as banks tighten lending criteria. The RBA sees the correction in house prices and the tightening of lending conditions as a healthy development, reducing financial stability risks and potentially prolonging the cycle. GDP growth slowed significantly in the September quarter, falling to 0.3% (2.8% year-on-year) from a rate of 0.9% (3.4% year-on-year) in the June quarter. Net exports and government spending were solid contributors to growth, while household spending was soft, growing 2.5% year-on-year. The results bring into question the RBA’s base case assumptions for growth. The economy would need to grow 1.3% in the December quarter to match the RBA’s growth forecast of 3.5% for the 2018 calendar year—a highly unlikely outcome. Meanwhile, solid employment growth and evidence of a moderate lift in wages growth are supporting economic conditions. Employment growth has defied expectations of a slowing in momentum, with October recording an additional 42,300 full-time jobs, offset by a fall in part-time jobs of 9,500.

The S&P/ASX 200 Index returned -2.2% through November as Australian shares appeared to miss out on the market bounce experienced in the US and Asia. Following October’s volatility and market drawdown, losses were stemmed in the Information Technology sector (+1.0%), with Wisetech Global (+16.5%) and Afterpay Touch (+15.5%) partially recovering, while employee share plan provider Computershare (-8.2%) was down following the completion of its acquisition of Swiss-based Equatex Group. In a reversal of recent fortunes, it was the Financials sector (+1.4%) that drove optimism through the latter part of November, with gains from Platinum Asset Management (+10.4%) and Insurance Australia Group (+6.6%) while the major banks saw mixed results. After spiking in October, the ASX 200 VIX remains elevated, ending November above 17 points as investors prepare for a possible end to low-volatility conditions seen through most of 2017 and 2018. Small cap shares fared relatively well through November, falling only 0.4%, although over the past 12 months they remain the underperformers, returning -1.6% compared to -1.0% from the ASX 200 Index. The Energy sector (-10.4%) was the hardest hit in November, with Santos (-16.9%) and Beach Energy (-13.4%) leading the losses with oil prices declining sharply on rising US output and slowing global economic growth rates. 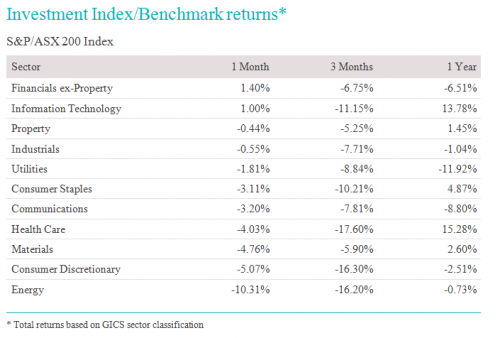 Global shares fell 1.9% in Australian dollar terms but rose 0.8% in local currency terms. Plunging oil prices brought US shares under pressure in November but the S&P 500 Index managed to end the month 2.0% higher after Fed Chair Powell backtracked on hawkish comments, hinting that the Fed may need to slow the pace of tightening. In early December, markets reacted favourably to news of a halt to new trade tariffs during a meeting between US President Trump and Chinese President Xi Jinping at the G20 summit in Argentina. Emerging markets also rebounded from October’s weakness, driven by a recovery in Chinese equities. In the US, the Health Care sector (+6.8%) was November’s biggest gainer, benefiting from the mid-term election results, which saw the Democrats reclaim the House of Representatives. Interest rate sensitive sectors including Real Estate (+5.3%) and Utilities (+3.1%) were supported by a fall in long-term Treasury yields, while a stabilisation in commodity prices (outside of energy) resulted in gains for Materials (+3.8%). Japan’s Nikkei 225 Index returned 2.0% in November while the STOXX Europe 600 Index lost 1.1%, with falling energy prices and the possibility of a failed Brexit deal weighing on returns.

The S&P/ASX 200 A-REIT Index returned -0.4% in November, with positive gains from Charter Hall Retail REIT (+6.4%) and Shopping Centres Australasia (+2.7%) as non-discretionary retail continues to find favour in the market. A-REITs have outperformed the ASX 200 Index over the past year, driven in part by growth in e-commerce and the demand for warehouse space, which has resulted in strong rental growth for industrial property. Oxford Property Group’s takeover of Investa Office Fund became effective the start of December and is scheduled to be implemented mid-month. Cromwell Property Group (-3.3%) believes commercial property in Australia is at or close to cyclical highs, and recently announced plans to acquire 23 assets throughout Europe for A$605 million. Recent market volatility saw healthcare property specialist Heathley defer plans to list a $528 million REIT despite interest from medical and property funds. Service station owner Viva Energy REIT (-5.1%) was the biggest loser through November. A recovery in US REITs saw the Bloomberg US REIT Index rise 4.4% in local terms, with the biggest gains from Health Care (+7.4%), Apartments (+7.4%) and Single Tenant property (+5.0%).

Global bonds, measured by the Barclays Global Aggregate Index, returned -2.6% in November in AUD terms and 0.5% in AUD hedged terms. The US 10-year Treasury yield finished November at just under 3.0%, following a high of 3.26% earlier in the month. Early December saw a significant flattening of the yield curve as global growth concerns and dovish Fed comments led to a rally in government debt, with the 10-year yield falling to 2.92% while treasury bill rates rose. Long-term inflation expectations priced between Treasury Inflation Protected Securities (TIPS) and nominal Treasuries have held above 2.0% although the spread appears to be narrowing. Towards the end of November Fed Chair Powell stated that the funds rate was “close to neutral”, which the market interpreted to mean a potentially less restrictive monetary policy going forward. In Australia, the AusBond Composite Index returned 0.24%, with Treasuries returning 0.32% and corporate debt 0.08%. The Australian 10-year Treasury yield fell from a high of 2.76% in November to end the month at 2.59%, falling further through December to 2.44%. Emerging market yields were mixed, with Turkey’s 10-year yield stabilising at around 7.5% while Argentina’s 10-year yield rose back above 10.0%.

The Australian dollar rose 3.3% against the US dollar in November and appears to have found support in the low US 70 cents region, ending the month at around 73 cents. While purchasing power parity suggests the high 60s is ‘fair value’, relatively strong prices for some of Australia’s key commodities such as iron ore suggest the dollar may be slightly oversold based on a fundamental terms of trade valuation model. The focus of markets has been on relative interest rates, which is why the US dollar has risen through 2018.