As most expected, confirmed Covid-19 cases are again rising in the US. This time in Southern and South Western states which opened their economies early, rather than the original hotspots in the North East. In response to this, markets have weakened as some plans for the relaxation of lockdowns have been put on hold. Are we about to repeat the experience of the March quarter of this year and crash back into a hard lockdown? For a variety of reasons, we don’t think so. Below, we outline what we think the next six months looks like in terms of economic growth and markets.

The current spike in cases in the US is concerning, however daily deaths have yet to start rising again. This likely reflects the lag between infection and death – normally three to four-weeks. Case growth in the US began to accelerate meaningfully again in mid-June. As a result, we expect deaths to begin increasing again from mid-July. 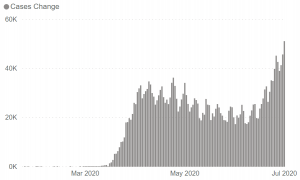 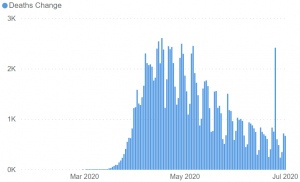 However, there is a moderate probability that there are fewer relative deaths associated with this reported spike than through March and April, reflecting: 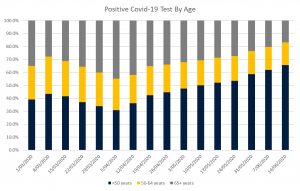 If the number of deaths remains relatively contained due to these factors, widespread lockdowns are unlikely. In addition, a better understanding of viral transmission means lockdowns can be better targeted at higher risk activities, such as indoor dining and drinking. Masks are also being worn by an increasing percentage of the population and where they are being used, they are effective. This, combined with better hygiene and some physical distancing, should reduce the percentage growth in new cases relative to the initial outbreak.

So, given the above, what does the economic recovery look like? In our estimation, it looks sporadic and disjointed, but ultimately positive. Some activity, which was suppressed by government action but isn’t particularly dangerous, will rebound almost immediately. Construction and much of the manufacturing sector fit into this category. Data related to these sectors will look like a V shaped recovery. Other areas of the economy, such as food services, tourism and entertainment will remain impaired until there is an effective vaccine or treatment. Data related to these sectors will look like an L. Some activity, while dangerous, can be allowed to continue with adaptation. Professional services workers can work from home rather than in offices, university education can be delivered remotely, retail goods can be purchased in store with physical barriers or delivered. Heightened business uncertainty means investment decisions will be delayed, making a recovery in capex look like a U. We see a similar pattern in Chinese economic data (see below chart). 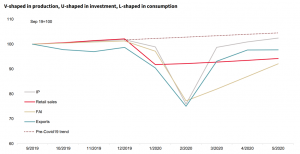 From a consumer perspective, we think sectors representing around 11% of household spending will be seen as dangerous and thus directly affected. However, this 11% doesn’t account for the potential to “pivot” businesses or the extent that some sectors will be impacted less than others. Restaurants aren’t going to disappear, they will just operate at a lower capacity and with more home delivery. Overseas tourism can to some extent be replaced by domestic tourism. Some of the spending that cannot be used for services that are not operating will be redirected to goods (if you are going to be spending more time at home, why not redecorate?) or services that can still be delivered (don’t meet friends at a restaurant, meet at a park with a food truck). Regardless of this pivot, the overall level of this sort of activity will remain impaired until the virus is no longer a threat. We see some evidence of this in mobility data, where physical attendance at workplaces and retail and recreation businesses has flatlined after some recovery.

Applying this profile of recovery to the models we use to forecast earnings growth suggests earnings will not reach their previous peak in Europe until late 2021, in the USA until mid-2022 and well beyond that for Australia, Japan and emerging markets. This is consistent with previous recessions. Following the Financial Crisis, it took three years for US earnings to reach their previous peak. This is a more pessimistic earnings profile than currently forecast by consensus (see below). However, consensus tends to be structurally optimistic and then revise their expectations lower through time. As a result, the gap between our view and the market’s doesn’t necessitate a price reaction. 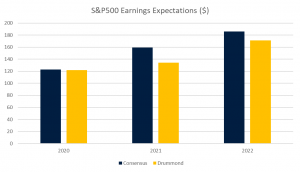 The key short-term risk to this outlook is the impending “fiscal cliffs” in many economies. The fiscal stimulus has been unprecedented, and stopped the lockdowns triggering a global depression, rather than recession. However, it is also time limited. In the USA, on July 31, the additional $600 unemployment benefit per week included in the CARES act will run out. And with unemployment benefits normally lasting 26 weeks, workers who lost their job in March will exhaust all their unemployment benefits in September. If this stimulus is not topped up, it will present a material household income shock. Australia faces a similar challenge at the end of September.

The information contained in this Market Update is current as at 06/07/2020 and is prepared by Drummond Capital Partners ABN 15 622 660 182, a Corporate Authorised Representative of BK Consulting (Aust) Pty Ltd (AFSL 334906). It is exclusively for use for Drummond clients and should not be relied on for any other person. Any advice or information contained in this report is limited to General Advice for Wholesale clients only.