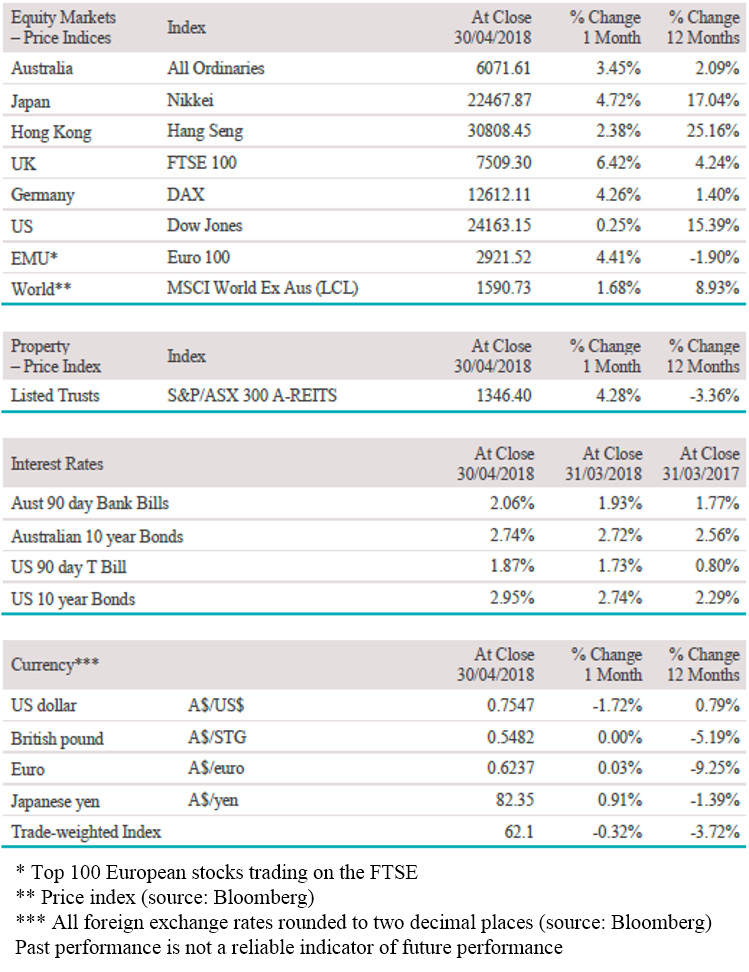 The March quarter saw some slowing of momentum, partly due to temporary factors but compounded by concerns over a possible trade war between the US and China. Inflation expectations showed signs of firming, pushing yields higher through April, while a narrowing of the LIBOR-OIS spread helped calm the market’s nerves. Fundamentals remain supportive of growth through 2018 and 2019, with inflation expected to rise as labour markets continue to tighten.

March quarter growth was an annualised 2.3%, indicating a slowing in activity over the December quarter. Partly weather-affected, consumer spending growth weakened to 1.1%, while manufacturing activity peeled off from extremely high levels. Headlines have been dominated by announcements of further tariffs, raising fears of a trade war, while markets have been watching interbank funding costs for signs of financial system stress. The CPI rose to an annualised 2.4% for March, while core CPI was 2.1% year-on-year and is now sitting just above the Fed’s 2% target. The core PCE index jumped from 1.6% to 1.9% year-on-year in March, in what is perhaps the strongest evidence yet that inflation is starting to take hold. Markets reacted by driving the US 10-year Treasury yield to 3.0%, reflecting long-term inflation expectations. Non-farm payrolls added 164,000 in April, lower than the expected 189,000 but enough to move the unemployment rate through the 4.0% barrier to 3.9%. Claims for unemployment benefits fell during the month and the number of Americans receiving jobless aid fell to its lowest level since 1973. Manufacturers reported a tightening in the supply chain market and labour shortages, while others voiced concern about steel tariffs, which have made it harder to source materials.

Inflation in the euro area remains sluggish, with the CPI falling to 1.2% in April, down from 1.3% in March, while core inflation fell sharply from 1.0% to 0.7%. The ECB still believes inflation will rise to 1.7% by 2020, with oil prices expected to lift the headline rate in coming months. Real GDP in the euro area has expanded for 20 consecutive quarters, but March quarter growth appears to have pulled back. Europe’s composite PMI, which is closely correlated with growth in the euro area, still remains above its long-term average and is close to a 12-year high, with a pickup in services activity in April. Unemployment in the eurozone was stable in March at 8.5%, down on March 2017’s reading of 9.4% and the post-crisis peak of 12.1% in April 2013. Germany’s unemployment rate fell from 3.5% to 3.4% and is now at its lowest level since 1995. In comparison, Italy’s rate has fallen to 11.0% from a post-crisis peak of over 13%, and in Spain the rate has fallen to 16% from a post-crisis peak of over 26%. In France, President Macron’s reformist resolve is being tested by industrial action from rail unions protesting the overhaul of railway company SNCF.

Economic data for the early part of 2018 suggests the economy has slowed marginally after the better than expected growth in 2017. The March quarter GDP may have come in at a steady 6.8%, but PMI indicators of manufacturing activity still appear weak, while investment spending also continues to soften. The official PMI rose narrowly to beat expectations in April, but was still one point down on March at 51.4. The Caixin PMI index rose to 51.1 from 51.0, while March industrial production data showed output growth falling to 6.0% from 7.2% in February. The March money supply and total financing data pointed to an ongoing slowdown in credit, largely in the shadow banking sector, and M2 money supply growth eased to 8.2% from 8.8%. In response to the imposition of tariffs on Chinese steel and a range of industrial technology, auto and medical products, China announced tariffs on a broad range of US goods, including sorghum, wine, fruit and nuts. The measures are designed to target President Trump’s supporters in the US, forcing both countries to come to the table.

Japan’s manufacturing sector expanded at a faster pace in April, with the Nikkei Japan Manufacturing PMI rising from 53.1 to 53.8 amid improved growth rates in output and new orders. The services sector also recorded a boost, rising at the fastest pace in six months, with improved demand allowing service providers to lift prices. The March Tankan survey also paints a promising picture, with March results ahead of the Bank of Japan’s forecasts. The Japanese labour market is still extremely tight despite unemployment rising marginally to 2.5% in February from 2.4%. Headline inflation was
-0.4% in March and 1.1% over 12 months, while core inflation is hovering at 0.5% over the year. The Bank of Japan noted in its outlook that growth will likely be impacted through 2019 and 2020 by the introduction of the consumption tax hike, which will take effect next year. Public investment is expected to remain at a relatively high level, reflecting in part government stimulus measures and demand generated by the Tokyo 2020 Olympic Games.

In a decision that undoubtedly surprised very few, the RBA left the cash rate on hold at 1.50% at its May meeting, making this the longest spell of inactivity since 1990. While there was no discernible shift in rhetoric, the Bank noted that inflation is moving in line with expectations, sitting just below the target 2% rate. While inflation is still below target nationally, the ABS notes that the east coast is generally experiencing inflation in excess of 2%, boosted by the Housing and Food groups. The May Budget forecasts show growth accelerating further to 3.0% in 2018-19 and CPI rising to 2.25%—unchanged from December’s MYEFO. Public infrastructure spending, along with income tax cuts, should help to reduce spare capacity and boost household income, but low wages growth is still a major sticking point. The Australian economy continues to be marked by ongoing consumer caution, and policymakers remain concerned about the impact of any interest rate rise on the household sector, especially given current low wages growth and high levels of household debt.

The S&P/ASX 200 Accumulation Index rose 3.8% in April, driven by rises in commodity prices, allowing the index to rebuild following falls through February and March. All sectors were positive, with Energy (+10.7%) and Materials (+7.4%) the top performers. Oil and gas giant Woodside Petroleum’s Q1 results revealed an 18% rise in revenue on Q4, underpinned by both price and volume increases. Aluminium had a bumpy ride over the month due to uncertainty around President Trump’s proposed tariffs. After surging to its highest price since 2011, the metal plunged 8% to the end of the month, putting a halt to the rallying Rio Tinto (+9.9%) and South32 (+15.5%). Financials (+0.1%) were flat through the month, with AMP (-19.0%) under pressure in the wake of the Royal Commission into Financial Services, while insurers IAG (+5.6%) and Suncorp (+5.1%) had a positive month. The defensive Telecommunications (+1.9%) and Utilities (+2.2%) sectors underperformed the index in April as the more economically sensitive sectors took centre stage. 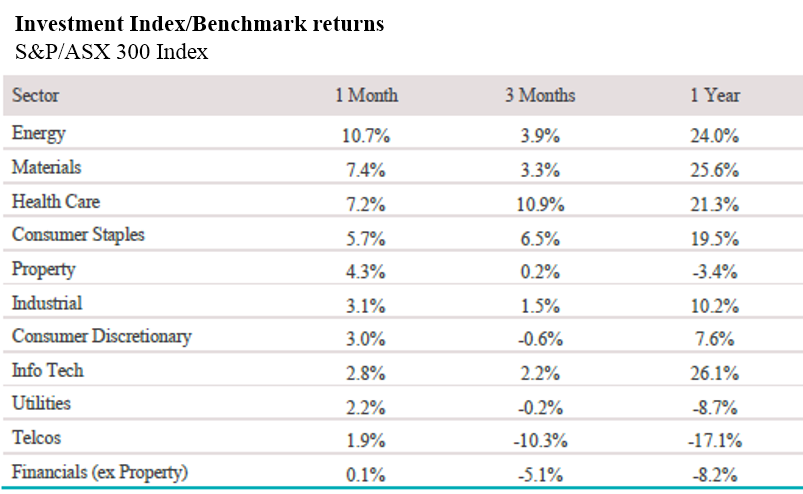 The MSCI World ex-Australia Index rose 2.8% in Australian dollar terms as global equity markets recovered from the previous month. In the US, the S&P 500 Index gained 0.3%, reaching a high of 2709 points to end the month at 2648. While Q1 earnings season was mostly met with approval, there were signs of cost inflation creeping into results, with the impact felt across major Consumer Staples (4.5%) and Industrials (-2.9%) sector shares. After markets were rocked by volatility in February, the VIX settled at an average of 18.0 over April—still higher than the historic lows of 2017. In Europe, the broad STOXX Euro 600 Index rose 3.9%, led by the Oil & Gas (+12.1%) and Retail (+8.7%) sectors, with a surprise multi-million pound merger between British supermarkets Sainsbury’s and ASDA announced at the end of the month, which will come under scrutiny from regulators. In Asia, Japan’s Nikkei 225 Index gained 4.7% and Hong Kong’s Hang Seng rose 2.4%, while China’s CSI 300 Index was down 3.6%.

The S&P/ASX 300 A-REIT Accumulation Index gained 4.3% in April, with investor concerns about a rising interest rate environment unable to hold the sector back. After falling through Q1 2018, shopping centre REITs bounced back in April, with Westfield (+8.0%) higher as directors unanimously urged shareholders to approve the $30 billion takeover bid from French property behemoth Unibail-Rodamco. Meanwhile, Scentre Group (+5.2%) shrugged off fears of a potential Myer collapse, saying it could adjust the mix of retailers inside its centres if necessary. But it seems retailers should not hold out for rent relief in the near future. Industrial property REIT Goodman Group (+7.6%) continues to benefit from its biggest client, Amazon, which is expanding its Australian presence with a fulfilment centre in South West Sydney. Globally, the FTSE EPRA/NAREIT Developed Market Index (AUD hedged) rose 2.9% in April. US REITs rose 0.4% in USD terms, boosted by warehouses (+4.9%) and hotels (+3.8%) and dragged down by malls (-1.0%) and diversified managers (-1.6%).

Australian bonds returned -0.35% in April, with Australian government bonds returning
-0.56% and longer-term government bonds (ten years plus) returning -1.24%. Globally, the Bloomberg Barclays Global Aggregate Bond Index (AUD hedged) returned -0.38% as trade tension between the US and China put upward pressure on yields, and rising commodity prices also forced inflation expectations higher. The US 10-year Treasury yield crept above 3.00% in April—the first time it has broken through since January 2014—however shorter-term rates have also risen in line with the Fed’s tightening path, producing a very flat looking yield curve. US net borrowing totalled $488 billion in Q1 2018, exceeding the old record of $483 billion in Q1 2010, with Treasury Secretary Mnuchin affirming his faith in the bond market’s ability to absorb rising government debt. The Japanese 10-year yield rose from 0.04% to 0.05%, still hovering above the Bank of Japan’s zero yield target. The German 10-year yield rose from 0.49% to 0.56%, while the 5-year yield rose from -0.11% to -0.06%.

The information contained in this Market Update is current as at 10/05/2018 and is prepared by GWM Adviser Services Limited ABN 96 002 071749 trading as ThreeSixty Research, registered office 105-153 Miller Street North Sydney NSW 2060. This company is a member of the National group of companies.