Is Housing in Australia Unaffordable?

The Australian housing market is a source of endless barbeque conversation and media pontification. Potential first home buyers complain that they are perpetually priced out of the market. Established buyers retort that interest rates are significantly lower than when they purchased their first property. In this Insight, we unpack the Australian housing market, with a particular focus on affordability. The debate around house prices is not just a social or moral one. House prices matter for investors because they influence household consumption patterns and potential growth. They also have a symbiotic relationship with interest rates, and a key driving force of RBA policy in coming years will be the debt load accumulated by households in the recent price boom.

To provide some context, below we show our estimate of the average dwelling (houses and units) price across the three largest Australian cities since 1980. As these values are based on hedonic indexes, they attempt to account for the improvement in home quality (size, location etc) over time. 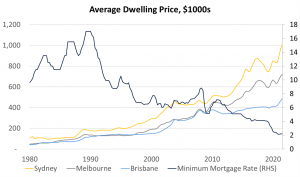 Dividing these values by household income[1]is usually the first step in assessing housing affordability. As one would expect, this shows that Sydney and Melbourne are very close to previous highs. While a multiple of nearly ten times household income in Sydney seems exceptional, it is in the same ballpark as New York and Berlin, lower than London and Vancouver, but higher than San Francisco and Los Angeles. Sharply rising house prices over the past few decades (with some significant swings and roundabouts) have been a worldwide phenomenon. 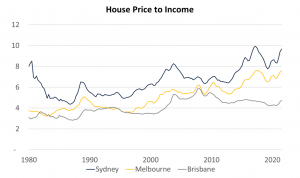 There is substantial debate as to why house prices have risen so much. Some blame politicians for policies which restrict housing supply (slow land release, infrastructure charges, difficulty in attaining approval for medium density). Domestically, many point the finger at investors, which benefit from extremely generous tax breaks and banks who are much happier to lend for an investment property than shares or a business. While these factors probably have an impact, in our estimation[2] the largest impact has been the fall in interest rates since the 1990s. Lower rates increase a household’s estimate of their borrowing capacity. Particularly in major cities, the supply of dwellings in desirable locations is relatively inflexible. The supply of land close to city centres is fixed. Lower interest rates effectively mean more borrowing capacity chasing the same amount of property, pushing prices higher. A generally rising standard of living should also boost house prices. Once basic needs are met, households often willingly dedicate more of their income towards improving their shelter.

Although depressing to look at for those who do not own a home, the cost of a dwelling in isolation or even relative to income is relatively meaningless from an affordability perspective. Few pay cash for a dwelling, especially first home buyers. The most relevant measure of how much a property costs for a household is the mortgage repayment. To account for this, we need to bring interest rates into the equation. We do this in the chart below, showing annual mortgage payments as a percent of household income. Unsurprisingly, once record low interest rates are accounted for, housing in Australia has rarely been this affordable, notwithstanding the tick up in the last few quarters. 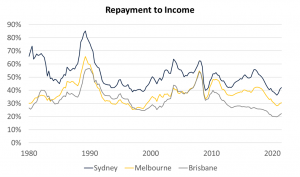 Before those who bought houses in the 1980s start shouting “I told you so” to their despondent children still living at home, there are more factors to consider. Just as the absolute price of a house does not provide the complete story when it comes to affordability, nor does the repayment a new homeowner makes in the first month of ownership. An important factor is the deposit required to enter the market. The chart below shows how much pre-tax household income would need to be saved over a three-year period to finance a deposit given prevailing market conditions[3]. Here, we assume a 20% deposit in the 1980s, falling to 5% through the 1990s and remaining stable in the period since[4]. While the share of income needed for a deposit has increased, the burden doesn’t appear to be too great. For Sydney, the difference between the current burden and the period average is around $70 per week. 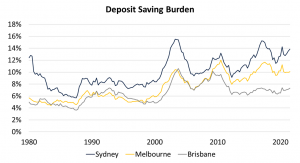 While getting together a deposit (unless parents are in a position to help) can feel like a challenge, what matters most for a household (and for the economy) is the share of household income directed toward repayments over the life of the mortgage[5]. Using this metric, we can model how current affordability stands compared with purchasing a home in previous decades. The solid bars in the chart below show the total share of household income taken by mortgage payments over the life of a 30-year loan in five-year increments assuming interest rates stay flat and household income grows by 3% per annum. The higher the bar, the worse the outcome. The solid bars show that even if interest rates stay at record lows for the next 30 years, the share of income required to finance a mortgage will only be overshadowed by 1980 in Sydney and 2010 in Melbourne. Brisbane remains relatively affordable under this scenario. 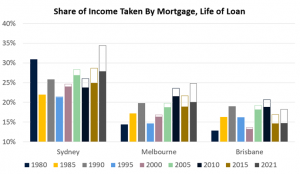 A more realistic assumption involves some increase in interest rates over the next three decades. The clear bars on top show the additional share of income taken if interest rates average around what they did in mid-2019, 1.75% higher than now. Note this change impacts the result of purchases made earlier, as many of these cohorts are still repaying their mortgages. In this scenario, outcomes are objectively worse. In Sydney, households who bought in the middle of this year would need to contribute nearly 35% of their pre-tax income over the next 30 years to repay the average house, around ten percentage points higher than the average. In addition to the higher repayments, these households would see a fall in their wealth, as house prices fall.

Clearly, house prices are highly sensitive to mortgage rates and while it appears low interest rates have been fully capitalised into prices, stock on the market is low, demand is high, and prices could overshoot. The tax treatment of property investors also looks safe after the Labor party walked away from proposed changes following their loss at the last federal election. However, the RBA is again making noises about slowing the market using macroprudential policy, which was quite effective with a lag (alongside significant new apartment supply and reduced foreign demand) at reducing prices through 2018-2019. The collapse in Australian population growth due to Covid restrictions will also materially influence the supply / demand balance for domestic housing. We are currently building a lot of housing for people who may never arrive, particularly if onerous quarantine restrictions are maintained once the international border is opened. 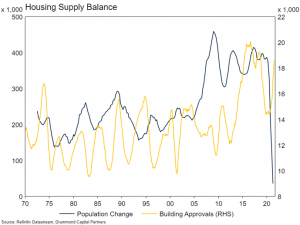 The implications for the RBA are clear. Any material move higher in interest rates will have a devastating impact on consumption for the one quarter[6] of households who are new homeowners, upgraders or investors given the extra mortgage payments creates structurally lower consumption than experienced by previous cohorts. We think the Government and RBA will act resolutely to stave off any significant house price falls should they eventuate given how much of the economy hangs on a robust, functioning housing market and the fact that nearly 60% of Federal MPs own an investment property. We saw an example of policy preference in action during 2020 with Covid mortgage repayment holidays and the homebuilder grant.

While the RBA will find it very hard to increase rates given the above, they have flagged the next move will be higher. Importantly, the expiration of the RBA’s Term Funding Facility (which provided access to low-cost funding for Australian banks as a response to Covid) will raise bank funding costs over the next few years, pushing mortgage rates higher even with no move in the cash rate. Many RBA watchers estimate the Bank will only be able to increase interest rates to around 1% before policy becomes restrictive. If house prices keep rising, expect this rate to fall. Australia used to have high interest rates relative to other rich economies, but we are now firmly in the lower for longer camp.

[2]The RBA has also done substantial work on the topic, implying a 1% permanent fall in interest rates lifts inflation adjusted house prices by more than 30%. https://www.rba.gov.au/publications/rdp/2019/2019-01/full.html

[3] We have used the return to global equity markets here, but the result if investing in cash is very similar.

[4] For reference, using a 20% deposit assumption would require saving more than 50% of household pre-tax income in Sydney, which is clearly unrealistic.

[5] There are myriad assumptions which now need to be incorporated into the analysis, such as changing interest rates, loan length, the house deposit, wages growth, the number of workers in each household and whether they work full or part time.

[6] Based on housing finance data, we estimate around 2.5 million property finance transactions in Australia (including investor purchases, excluding refinancing) over the past five years. There are around 10 million households in Australia, implying that 1 in 4 have transacted over that period (not accounting for multiple purchases by single households). Only around one quarter of these were from first home buyers.

The information contained in this Market Update is current as at 30/09/2021 and is prepared by Drummond Capital Partners ABN 15 622 660 182, a Corporate Authorised Representative of BK Consulting (Aust) Pty Ltd (AFSL 334906). It is exclusively for use for Drummond clients and should not be relied on for any other person. Any advice or information contained in this report is limited to General Advice for Wholesale clients only.