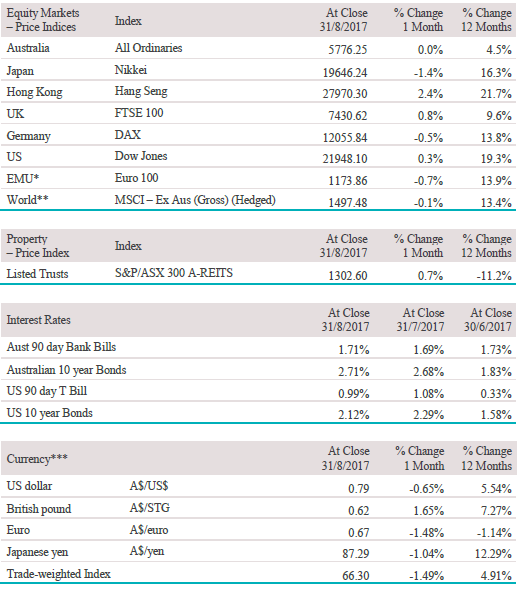 Reasonably good economic news and earnings reports in the US and Europe were largely ignored by investors, who were more focussed on the escalating geopolitical tensions involving North Korea, as well as the impending US debt ceiling and government shutdown negotiations.

Most of the economic data in the United States over the past month has been relatively good. GDP growth in the June quarter was revised up from 2.6% to 3.0% annualised growth helped by stronger household consumption and investment growth. The ISM survey of manufacturing firms, which is regarded as a good leading indicator of economic growth, rose to its highest level since March 2011 and although the number of non-farm jobs created was lower than expected, the result was still strong. Against this solid growth backdrop, wages growth and inflation have both been stuck at levels below where the US Federal Reserve would like, which has reduced market pricing for interest rate rises over the next year.

In the Eurozone, the strong momentum seen earlier this year has continued with economic growth revised up from 2.1% to 2.2% in the June quarter, and business and consumer surveys have remained at strong levels suggesting that the economy is in reasonable shape. Inflation has also ticked up a little, although as in other countries it remains below the European Central Bank’s target rate. The better economic outlook means that the ECB will likely begin to prepare investors for a gradual withdrawal of its emergency monetary policy settings in coming months, notwithstanding that they remain concerned by the recent strength of the Euro.

Chinese data over the past month has been a little mixed with some indicators such as the business surveys pointing to better conditions whereas other indicators such as industrial production, retail sales growth and fixed asset investment slowed over the past month. House price inflation also appears to have moderated as the central government worries about corporate leverage and property bubbles. Most economists expect that growth in China will continue at its current pace until the end of the year, given that there have been no major policy changes ahead of the leadership changes likely at the 19th National Congress of the Communist Party, which begins 18 October.

In Japan, the consumer price index rose an expected 0.4% year-on-year in July, however, the Bank of Japan’s preferred measure of core annual inflation remained very low at just 0.1%. Meanwhile the July employment report in Japan remained strong, with the unemployment rate staying at a very low rate of 2.8%. Real household spending disappointed expectations in July with a 1.9% decline in July to be down 0.2% year-on-year suggesting that despite strong employment, this is yet to translate into spending growth and inflation.

In Australia, the June quarter GDP figures painted a picture of an economy in reasonable shape after the weather affected softness in the prior quarter. The 0.8% quarterly expansion in the economy was boosted by strong growth in household consumption, business and government investment and LNG exports. Against this backdrop the RBA has become a touch more confident that its growth and inflation forecasts will be achieved over the next couple of years, which is why it believes that the next move in interest rates will be higher, although this move is unlikely to be for some time with money markets not pricing in a rate rise until late 2018.

The S&P/ASX 200 Accumulation Index returned 0.7% in August. By sector, the best performers were energy (+5.2% led by Santos and Origin), consumer staples (+5.2% led by Treasury Wine), and industrials (+4.6% led by Sydney Airport) with telecommunications (-7.2% both Telstra and Vocus had poor results), and financials

(-2.1% led down by CBA, QBE and Suncorp) being the worst. Offshore earners (with the notable exception of Treasury Wine) continued their disappointing run due to a mix of operational problems and the strength of the Australian Dollar. This came in spite of falling bond yields globally which traditionally underpin growth/high valuation multiple stocks. 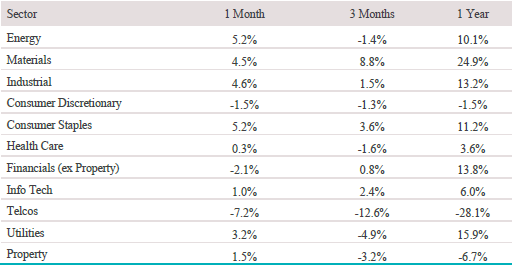 The MSCI World – ex Australia Index (in local currency terms) finished August up 0.19%, however a small fall in the Australian Dollar meant the index rose 0.86% in Australian Dollar terms. Utilities finished as the index’s top performing sector during a month in which bond yields fell. Technology and Materials also had a strong month. Energy stocks provided the most significant drag on index performance during the month, on the back of a reduction in refining capacity (and therefore reduced demand for crude oil) following Hurricane Harvey.

Australian bonds posted a small loss of 0.01% in August as government bond yields rose in Australia as investors began to price in higher interest rates in Australia. The higher bond yield was helped by relatively robust economic data – including non-mining investment – and moves by Canada to signal higher interest rates which many international investors believe is an economy very similar to Australia’s. Over the month, the two-year Australian Commonwealth Government bond yield rose from 1.81% to 1.90% per annum and the ten-year bond yield rose from 2.69% to 2.73% per annum.

Internationally, the Bloomberg Barclays Global Aggregate Bond Index (A$ hedged) returned 0.96% as bond yields fell by 17-19 basis points in the United States, United Kingdom and Germany due to geopolitical fears, low inflation prints and more dovish commentary from central bankers. In the US, 10-year Treasury bond yields fell from 2.29% per annum to 2.12% notwithstanding the slightly higher risk that the US debt ceiling and budget negotiations may not be resolved in time to avert a default on government debt.

The information contained in this Market Update is current as at 08/09/2017 and is prepared by GWM Adviser Services Limited ABN 96 002 071749 trading as ThreeSixty Research, registered office 105-153 Miller Street North Sydney NSW 2060. This company is a member of the National group of companies.