While the world’s attention has been focussed on tensions between Russia and Ukraine in recent weeks, we think the main issue remains inflation, interest rates, and how central banks, especially the Fed, act over the coming months and quarters. The Russian recognition of the Donetsk and Luhansk separatist regions of Ukraine as independent this week, represented an escalation in the conflict which has so far claimed around 14,000 lives since 2014 (Russia has annexed Crimea in that year and has been supporting separatists in Eastern Ukraine since). Large parts of Donetsk and Luhansk are controlled by Ukraine (see below), and Russia certainly has enough armed forces on the border to take both the regions in full or move further into Ukraine proper (both of which would move the conflict towards the more traditional definition of war). 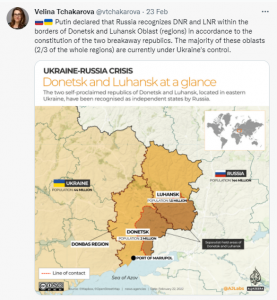 However, in the grand scheme of markets, unless NATO countries are drawn into the conflict (which is exceptionally unlikely), we think the impact will be relatively limited. More widespread conflict would increase energy prices, (which drags on growth and earnings), and increased sanctions which will prolong supply chain woes, keeping inflation elevated a little longer.  Specific, obvious examples include:

Markets do tend to sell first and ask questions later on geopolitical events such as this, however, they also recover quickly.  There are 11 such events listed below since 1991.  In seven of them indices had fully recovered in one month, and nine in three months. 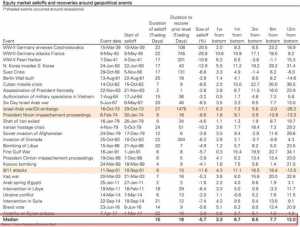 Our portfolios are currently underweight global equities, largely reflecting concern about higher interest rates and slowing growth over the coming year. This has provided a buffer for recent market volatility. If all we were concerned about was the Russian invasion, recent market weakness would represent a buying opportunity, however, risks from the Fed still dominate.